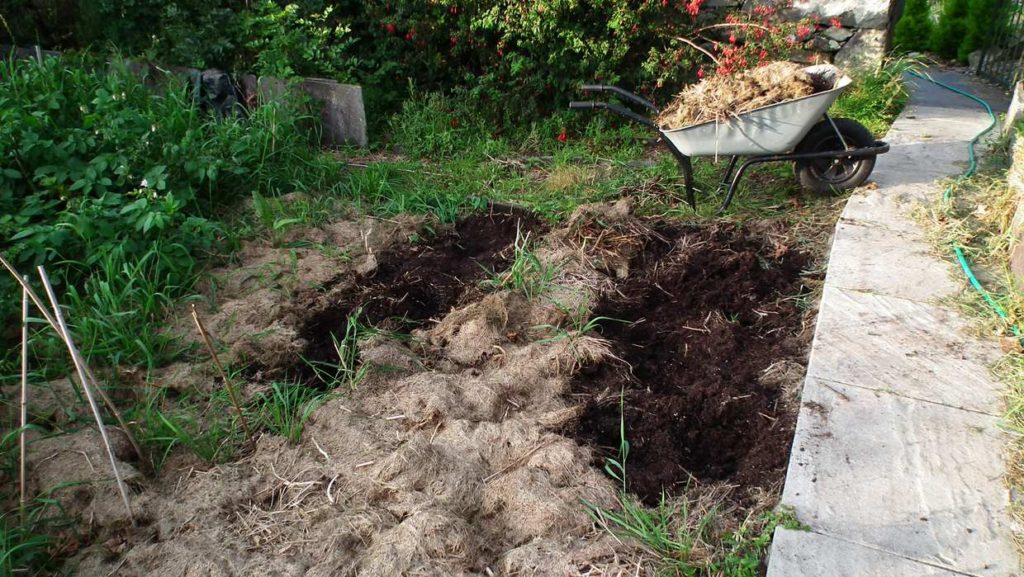 Growing is never without problems and one of the more serious ones is the potato blight. It is actually worse now than it used to be as a second strain of blight got into the country some years back and it mixes with the original, meaning there are different strains about. Some nastier than others.

The potato blight has hit us this year but happily my Sarpo blight-resistant varieties are holding up well so far, touch wood for luck! Resistant isn’t immune though and whilst Sarpo may shake off one strain of potato blight, another strain may bring them down. So I’m keeping my fingers crossed for them.

I think I’ve saved the crop from the affected varieties by cutting off the haulm before the blight got down into the tubers. Late on I made a start harvesting them, I’d been tied up with other jobs earlier.

I just started with the Arran Pilot and some Charlottes. Well the yield is very low, which isn’t really surprising. I was very late getting them planted and the blight hit before they’d had enough time to produce a good number of tubers. But there’s no blight apparent and no slug damage. I was concerned about slug damage growing them under the straw and grass clipping mulch but it seems my application of ferrous phosphate pellets have kept the pests down.

I was really pleased to come across quite a few worms as I moved the mulch. A healthy soil is chock full of life and the most visible sign is the worm population. As a rule, the more worms the better.

It seems my lasagne layering of cardboard, aged sheep manure and spent potting compost and freshly made compost has had some positive result. There’s still a very clear demarcation between the soil above and below the cardboard which has rotted away. As it stands, I’m not convinced that the no-dig method is working as I hoped. Early days though.

In the past even organic gardeners had access to the traditional chemical controls of Burgundy and Bordeaux mixture. These copper based mixtures were pretty effective, especially if used as a preventative. They were used for over 100 years and didn’t seem to leave gardeners lying dead in the potato patch.

Now that’s off the list and home growers have near nothing effective they can use legally to control blight. Most varieties will go down in a matter of days and even the Sarpo varieties are resistant, not immune, and can go down with some strains of blight.

Now I was never keen on spraying with copper based fungicides. On principle I prefer not to spray if there is another option. I don’t think there is much health risk with copper fungicides – after all you only spray the foliage not the tubers – but even so, I’d rather not. However, I’d rather spray than have no potatoes..

So what do the farmers use to control potato blight?

Farmers have quite a range of chemical controls available to them. Here’s an extract from the instructions for one of them:

When you read that list of warnings, a bit of copper sulphate (main ingredient when making Burgundy and Bordeaux Mixture) that used to be found in children’s chemistry sets doesn’t look so bad.