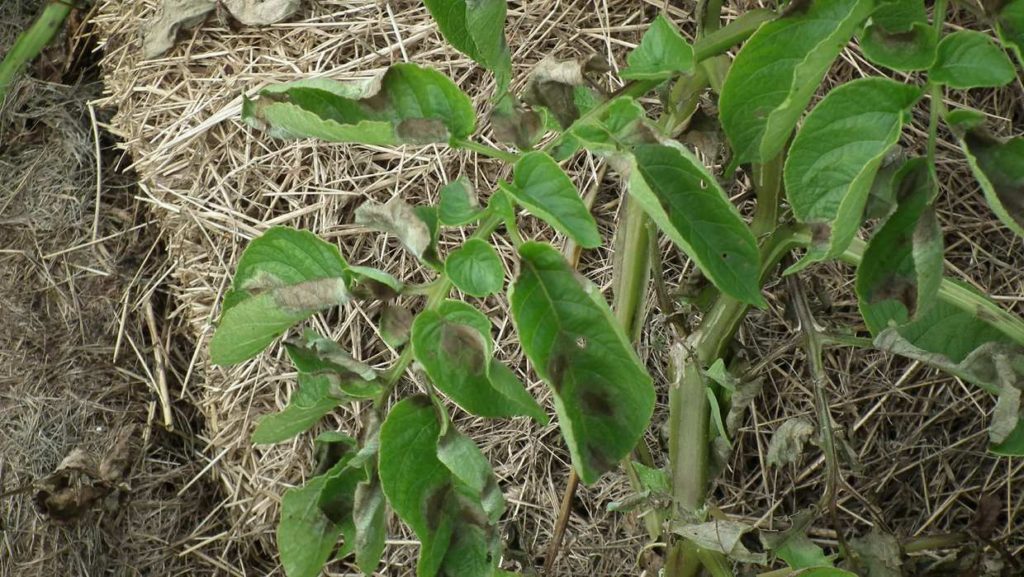 The thing is, there is no officially approved spray to control potato blight available to home growers. Farmers and those licensed to use horticultural chemicals have a range of fungicides available to them but not the normal home grower. Officially.. and there lies a problem I’ll come back to.

The worst affected are the Pentland Javelin, Sharpe’s Express and Arran Pilot. So far the Sarpo varieties seem clear,

What to do if you have potato blight.

The advice on what to do if you have potato blight is the same for organic and non-organic gardeners. If it has just started and there are just a few leaves showing the distinctive brown patches, cut off the affected leaves and either burn or bin them.

Do not compost them unless you are certain your compost heap is reaching 60ºC. Since my Hotbin composter is running at around 65ºC that’s where my haulm is going.

In my experience, this is very unlikely to stop the progress of the disease but it’s worth a try as the tubers will continue to grow. 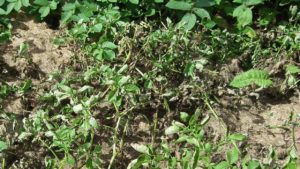 If the infection has a good hold then cut the haulm down as near to ground level as possible and dispose of it as above.

Leave the crop in the ground for two or three weeks so the skin of the potatoes hardens and any blight spores on the surface die off without infecting the tubers.

If the tubers are infected then you will most likely lose the crop in store. Your sacks of potatoes will be an inedible, stinking, slimy mess after just a few weeks.

I’d strongly recommend growing resistant varieties like the Sarpo range especially for main crop potatoes. The problem is resistant doesn’t mean immune. A further complication is that, like the flu, the blight strain and strength can vary from year to year.

So one year your potato plants may have no more than a few leaves affected and the next they’ve gone down in days. 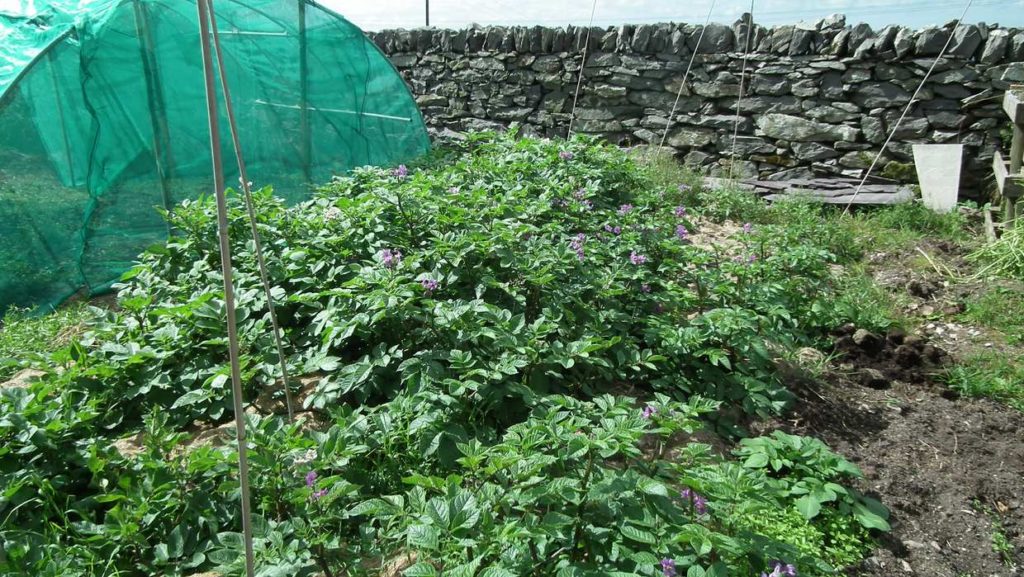 Blight only strikes when the conditions are right, warm and humid so planting early as possible bearing frosts in mind can often avoid it altogether, at least for the early varieties. Because of blight many growers have given up on maincrop varieties at least.

The Problem with Chemical Controls

Now we know a lot of men (it usually is men) take the attitude that reading the instructions is for wimps and if 5 grams is good then 10 or 50 even must be better. The thought of them with strong chemicals in large amounts is scary. A 2Kg pack of Dithane is enough to spray a hectare of potatoes. That’s about 40 full sized allotment plots!

At least allowing home growers to buy limited amounts of these products removes the temptation to buy from a grey market source and reduces the chances of someone being poisoned with a residue overdose.

And while we’re at it – products like Bordeaux and Burgundy mixture used to be organically approved. They’ve been around for many, many years and done us no harm but suddenly they’re terribly dangerous and banned. They can be simply made at home from easily available ingredients.. Not much profit for the chemical companies though.

GM may be the way to go

I’ve never been keen on GM crops but if there ever was an argument for it, potato blight would be that. It’s apparently easy to take the genes that confer blight resistance from one variety and insert into another variety. It would enable large healthy crops of our favourite potatoes without any chemical input.

Not much profit for the chemical companies there either…

2 comments on “Control for Potato Blight”