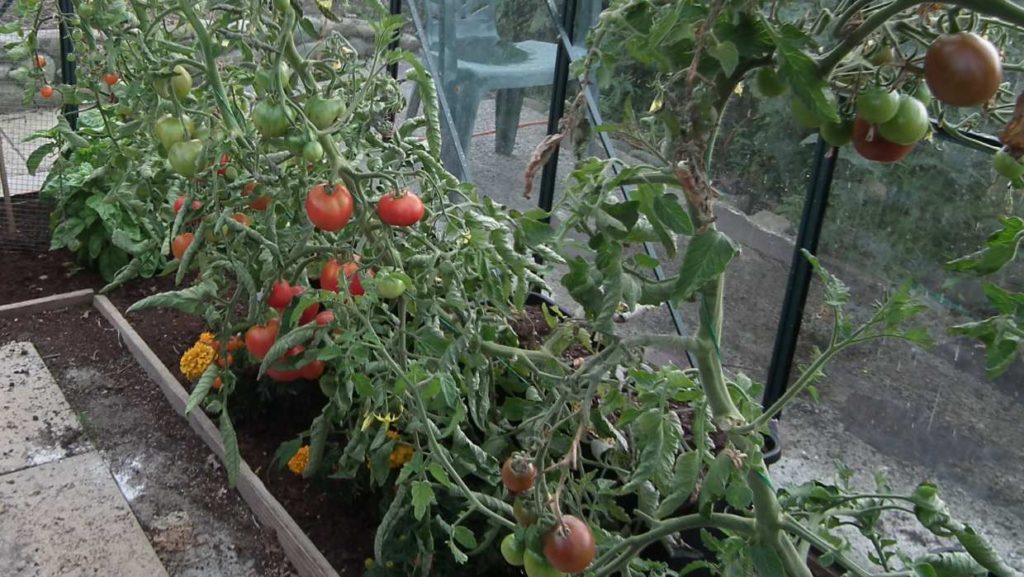 When we moved here we had to fell a couple of trees and cut an overgrown privet hedge back from the 30 foot high to about 3. Not ideal for the birds, but we’ve since planted a lot of trees. I’m not sure exactly how many, a couple of hundred near enough.

Our neighbours up the hill have been at it for longer, I think they’re planting a forest up there. They also buy large amounts of fat balls to feed the birds. It’s a wonder they can fly the way they feed them. I don’t feed the birds myself, with our cats around it would not be a good idea.

Anyway, this year I’ve seen more small birds than ever before here. I’m no twitcher so not sure what the breeds are but they’re pretty and a sign we’re improving the local eco-system and increasing bio-diversity.

One problem though: for the first time since we moved here there’s enough birds around to be a problem. They’ve eaten all the redcurrants and the jostaberries too. As I walked up the path to where the jostaberry lives, a thrush (I think) came out of the bush and flew off.

So, back to netting the fruit bushes next year.

We’re harvesting loads of blackcurrants, I reckon half as much again as last years 18 lbs. Much as we like them, I’m afraid I’ve gone a bit over the top with five bushes. I think next year we’ll be advertising a blackcurrant pick you own for free!

Adding to the Comfrey Bed

I’ve got about 30 comfrey cuttings in pots which are going to need planting out in anything from a couple of weeks to a month so it seems sensible to start preparing for them.

Started by cutting the grass next to the comfrey bed down as low as the mower will go. Then I ran the Mantis tiller over the surface, basically slicing up the turf. This should help open the top up a bit. Next I laid cardboard down and covered this with about 15cm of grass clippings.

I didn’t have enough clippings or card to cover all the area in one go but I should accumulate enough to be done well before the comfrey needs planting out.

I’ve two large plastic compost bins which I’ve used for cold composting. Basically the material goes in and eventually rots down and the worms do their work. Hot composting is faster and arguably better but involves more work. It’s particularly difficult to hot compost when there is a lot of soil involved.

I find the cold bins quite useful especially with pieces of turf from breaking new ground. Just bung things in, close the lid and leave for a year or two. The two bins were about as rotted down as they were going to get so the finished compost came out. Some went up onto the walled veg plot and some up to the other plots.

The instructions for the brassica tunnel arrived and, as I thought, I had gone wrong when putting it up. In fairness to myself, I was going by memory from 7 years ago! Now I’ve followed the instructions to the letter, it’s a lot more stable.

There’s a helpful bit at the end about coping with very windy locations by adding guy ropes which I’ll be doing before the winter storms arrive.

Planted out the first bed of leeks. I’ve got more to get out of the troughs and into the ground but the weather has turned quite nasty. It’s supposed to be summer! I’ve grown leeks by starting them in troughs before planting out for many years but next year I’m going to try a new method.

The thing with growing in troughs is that the roots get all tangled and splitting them causes quite a lot of damage, which checks the plants. I’ve got some large deep plant cell trays coming. The idea is to avoid the damage to the roots when transplanting and save time untangling.

Incidentally, leeks are a great crop for clay soils and no-dig growing as they are planted deeply and produce a large amount of roots which are mainly left in the ground when the plants are pulled. Those roots both break up the soil and add humus as they rot down.

Leave a Comment Here on Victim of Success Cancel reply