Hobbling Along on the Plot 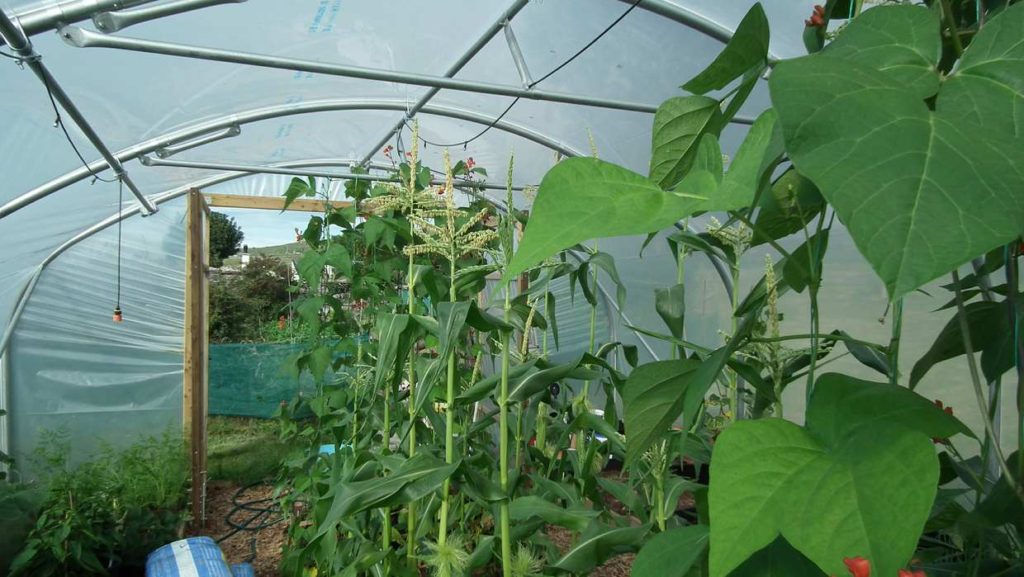 Well the knee is still paining me. It’s my own fault in the sense I should rest it more but there is so much to do at this time of year and we’ve had some lovely warm days to tempt me out to the plot.

The poultry patch got strimmed down to encourage tillering of the grasses. Hopefully I’ll have the fox-proof cage construct soon. Yet another job delayed by the knee. Hobbling about is one thing but lifting anything heavy puts pressure on which is reflected by shooting pains.

A Day In the Polytunnel

The soil in the polytunnel consists of inverted poor pasture turf covered with a mixture of spent potting compost and some bags of fresh multi-purpose compost. It’s not doing too badly but it does lack body and I suspect it’s deficient in some trace elements so I bought a pack of Chempak trace elements to help balance it.

First task was to harvest and clear the broad beans. The plants had grown to near five feet but there weren’t as many pods as you might expect from such tall plants. I cut the stems just above ground level leaving the roots behind to provide humus.

Most of the peppers in pots were placed on the vacant patch as they were being crowded by each other and by the plum bush Roma tomatoes. The tomatoes have gone berserk and grown to twice the size I’ve ever got them to grow outdoors. They’ve drowned my dwarf French beans! 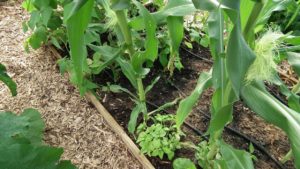 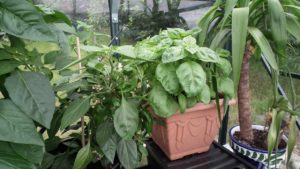 Basil in Pot in Greenhouse 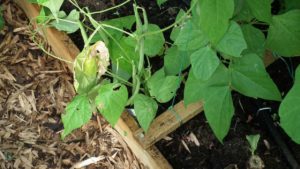 The sweetcorn in the centre bed has grown taller than any sweetcorn I’ve grown before. Some of the plants are near 8 feet tall! With the polytunnel having an overall height of just over 8 feet (2.54M) it’s as well they’ve not grown more.

Both the male flowers at the top of the plants and female tassels on the developing cobs below are out. As I walked up and down the row, tapped each plant which sent clouds of pollen falling from the flowers to fertilise the cobs.

The sweetcorn is interplanted with basil on one side which is doing well although the basil growing in a pot in the greenhouse seems to be doing best. More succulent, larger leaves.

The beans at either end of the centre bed are also doing well. The Firestorm runner beans – which I believe are a cross between runners and French beans – are flowering. The Cobra French climbing beans are forming now. Looking forward to seeing them cooked on the side of the plate, freshly picked.

Everything got fed and thoroughly watered. As I was feeding I added Envii seaweed feed and Chempak trace elements to the tomato or high nitrogen feed. I also gave the centre bed, where the sweetcorn is sucking nutrients out of the ground, a good dusting of Frass.

My jury is still out on Frass which is insect dung fertiliser / soil conditioner but I know some of the show growers are raving about it. 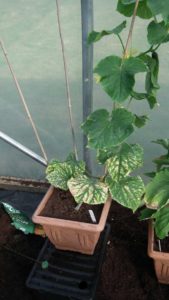 Both of the cucumbers in the greenhouse are near enough dead. First of all my crazy cucumber leaf eating cat stressed them. Then they got powdery mildew and I treated that with a dilute milk spray. The mad moggy decided I was putting sauce on her leaves!

Bicarb scored nil points and by the time I used SB Invigorator it was really too late. Weren’t that keen on the fruits anyway. I won’t be growing Hana again, too seedy and not much flavour. Next year it’s back to Carmen for the greenhouse.

In the polytunnel I’ve two cucumber plants, both Burpless Tasty Green. One of those in the border and the other in a pot being fed and watered from a reservoir via a capillary mat. The latter has developed cucumber mosaic virus so I think I’d best remove it before it infects other plants like the courgettes and aubergines.

However, the experiment on the growing method has already proven to me that it works as well if not even better than expected and next year I’ll be using it.

We had a mild winter and boy, are we paying for it. There’s quite a few slugs about but battalions of snails. I moved a pot on a shelf in the greenhouse and there were two big snails sat there.

They make a beeline for seedlings, strawberries and, thinking about it, anything else that grows! Now I know there are all sorts of things from hunting by torchlight to nematodes you can do but by far the easiest in my book are slug pellets.

I don’t like using the metaldehyde type because of possibly poisoning issues with wildlife and our cats but I’m happy to use the pet and wildlife friendly ferric phosphate sort (Growing Success) which are organically approved and, if not totally safe, a lot safer.

Even with this plague, I use them thinly. Too many or even piles of them as I’ve seen some people use are counter-productive and wasteful. I think the last tub has lasted us nearly 3 years! I think a lot of the pet poisonings with slug pellets are people putting piles of them down rather than a thin sprinkle. My theory is that if the thin sprinkle of pellets has gone by the next day, put another sprinkle down.

After the unwanted visitors, the wanted sort. I’ve noticed far more small birds this year than in previous. I’m not any good at identifying the different species but there seem to be quite a few types of finches.

In part I’m sure this is down to my neighbour’s who provide a lot of feed for wild birds through the winter and spring along with the first trees we planted five and six years ago. The very first tree we put in, a goat willow, had about four little birds in it this morning.

The blackcurrants, redcurrants and josta berries are all near harvesting now. Val’s looking forward to converting them to jams and jellies. 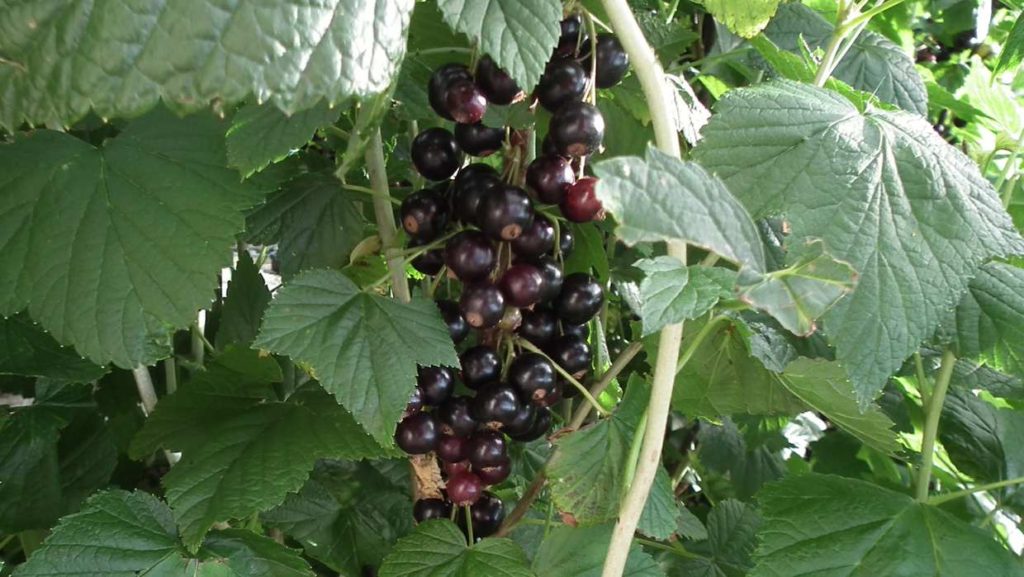