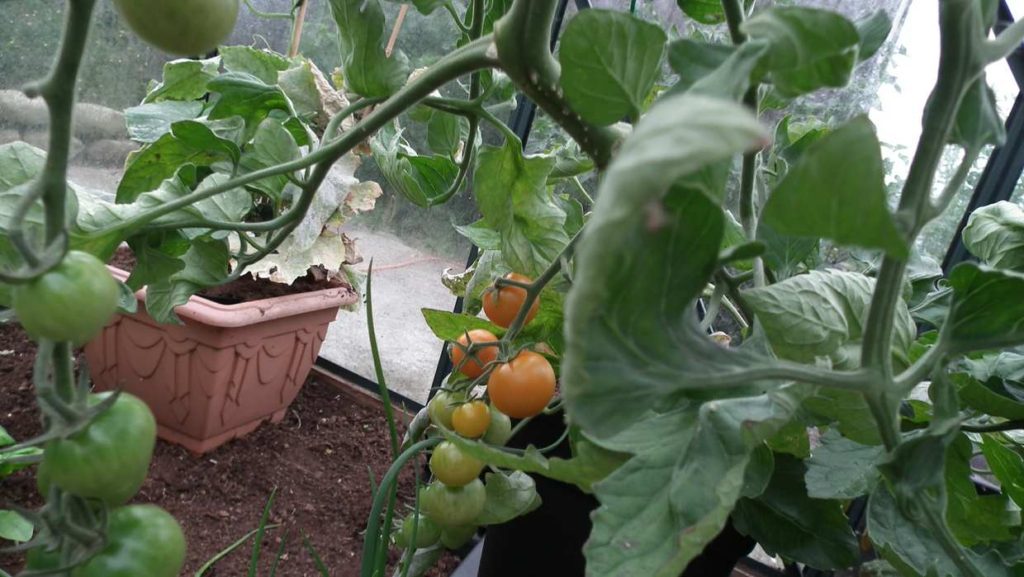 A week back last Monday I enjoyed the first delicious tomato of the season, a Sungold. These have been on my ‘must grow’ list for years now. They’re so sweet, prolific and early – a real winner. Now the rest of the truss are ripening up. The only problem is the grandson may find them and then they’ll magically vanish.. bet he blames the cat!

There’s always a temptation to harvest all the ripe tomatoes as soon as they’re ready but you’ll find this can check ripening as the ethylene gas given off by the ripe tomatoes triggers the unripe ones to ripen. It’s worth leaving a couple of ripe tomatoes on the plant until others start to colour.

All the salads are coming in now; cucumbers, peppers, spring onions, lettuces. It won’t be long before the aubergines start producing. The lower broad bean pods are filling nicely although losing some of the polytunnel crop as the plant stems collapsed under the weight was more than a bit frustrating.

Young broad beans, quickly blanched make a nice addition to a salad. Next bit of decent weather I think I’ll try a broad bean hummus. I like hummus with chickpeas and I like broad beans so fingers crossed I’ll like that.

Finally getting some carrots from the bed in the tunnel. They’re OK but not anything to be really proud of. It’s as if they get used to the compost in the raised bed and then, having had it too easy, have trouble getting into the soil below. Still, it’s taste that matters not shape.

The only thing with growing so much in the polytunnel and greenhouse is the time it takes watering in hot weather. In the heatwave I was spending nearly 2 hours a day on watering which is time I could do with spending on other gardening tasks.

One of the benefits of the Quadgrow is that it only needs topping up weekly, which is a big time saver. They reckon the reservoir should last a fortnight but with the plants being large and the weather hot, I’m not so sure. The plants have just the right amount of water all the time so long as the reservoir isn’t dry.

The peppers and aubergines being in pots require watering daily to avoid drying out in hot weather although you can get away with every other day normally. Next year I’ll grow those in Quadgrows as well. I’ll also be getting another soaker hose or two for the polytunnel. The soaker hose in the centre bed saves a lot of time so it makes sense to set up similar for the side borders.

Thinking ahead for next year, I had such wonderful results from supplementary lighting at the start of the season that when I saw a bargain clearance of 4 foot T5 growlights and reflectors I quickly hit ‘Buy Now’ and ordered 4. They arrived today so, having checked them, they’ve been put safely away until next year.

Just to make my day, I twisted my knee over the weekend. I’ve done this before and was told to rest it and it would get better. It did but it’s a slow business and it’s happened at the worst time when I’ve loads to do. Just limping up to the polytunnel or around the greenhouse leaves me feeling like the joint’s on fire. Even sitting at the desk causes it to play up, at the moment. More Ibuprofen and rest it. A chance to catch up on some reading.