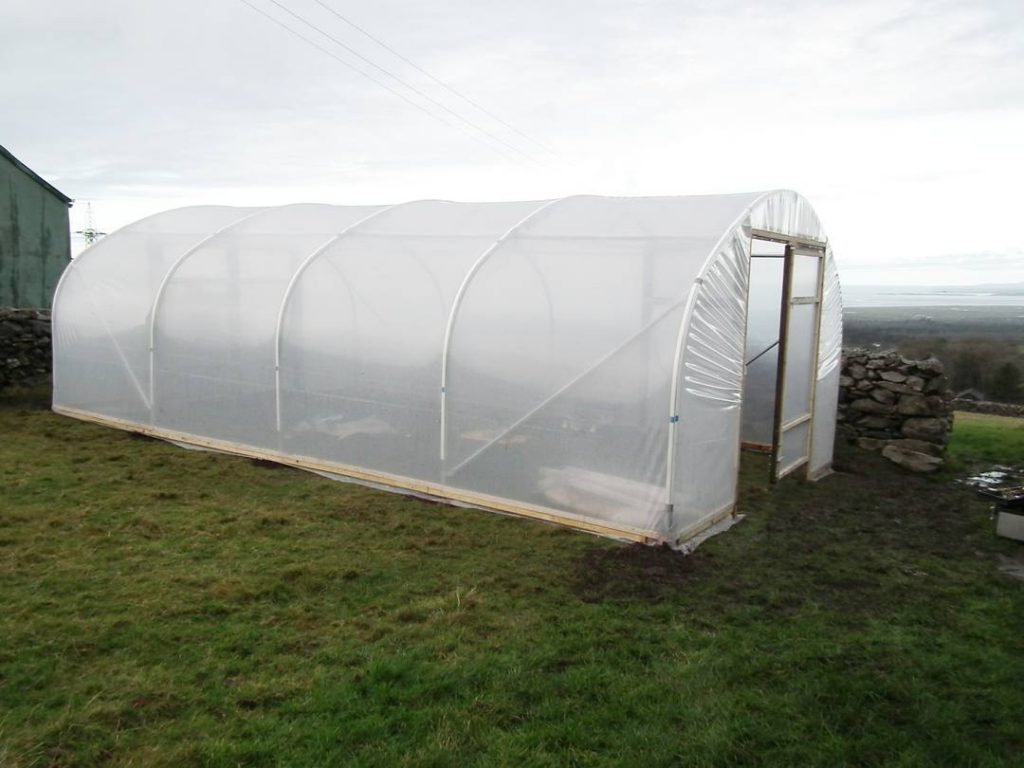 Tuesday went well. Despite the BBC insisting it was raining all day, it actually held off and threatened instead which was fantastic as it was building the polytunnel day.

The guys from First Polytunnels arrived as promised just after 8am having been on the road since 5:30am! I thought they’d want to have a drink and maybe a bit of breakfast before they got started but no, they wanted to get on with things immediately.

I showed them up to where it was going and they went into action like a well oiled machine, unloading the van in minutes. 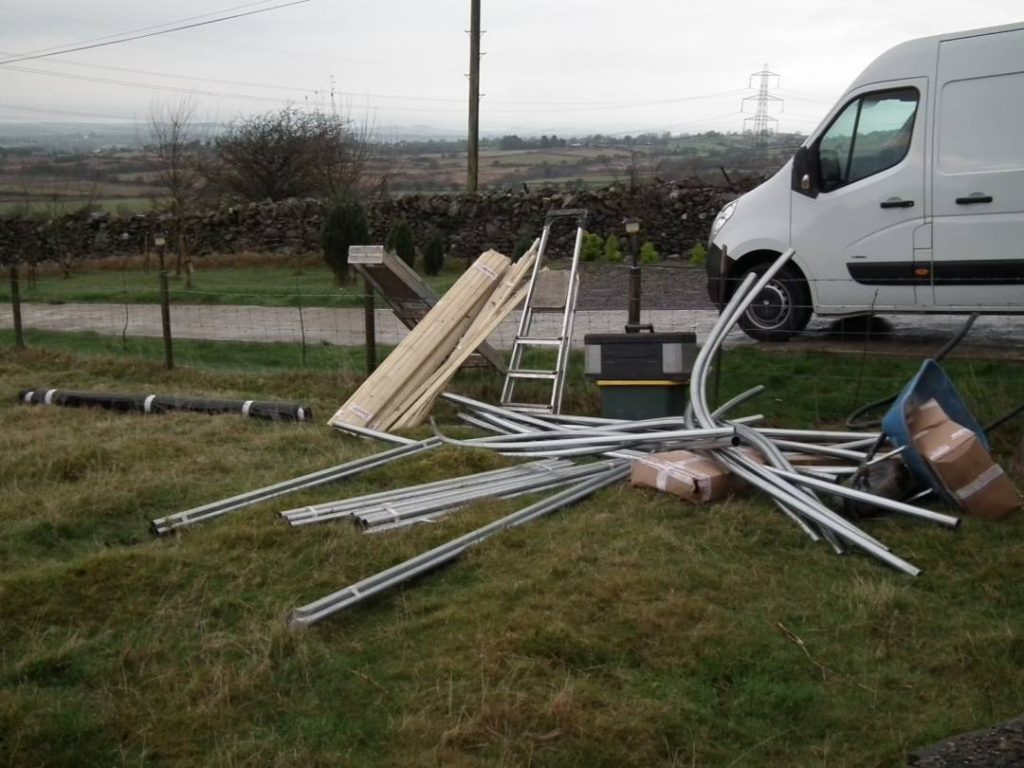 Polytunnel unloaded from the van to take up to the site

Start with the Foundations

Everything needed came off the van and was taken up to the site, so half an hour later they were ready to start building. As with any construction job, the critical thing is to get the foundations right. 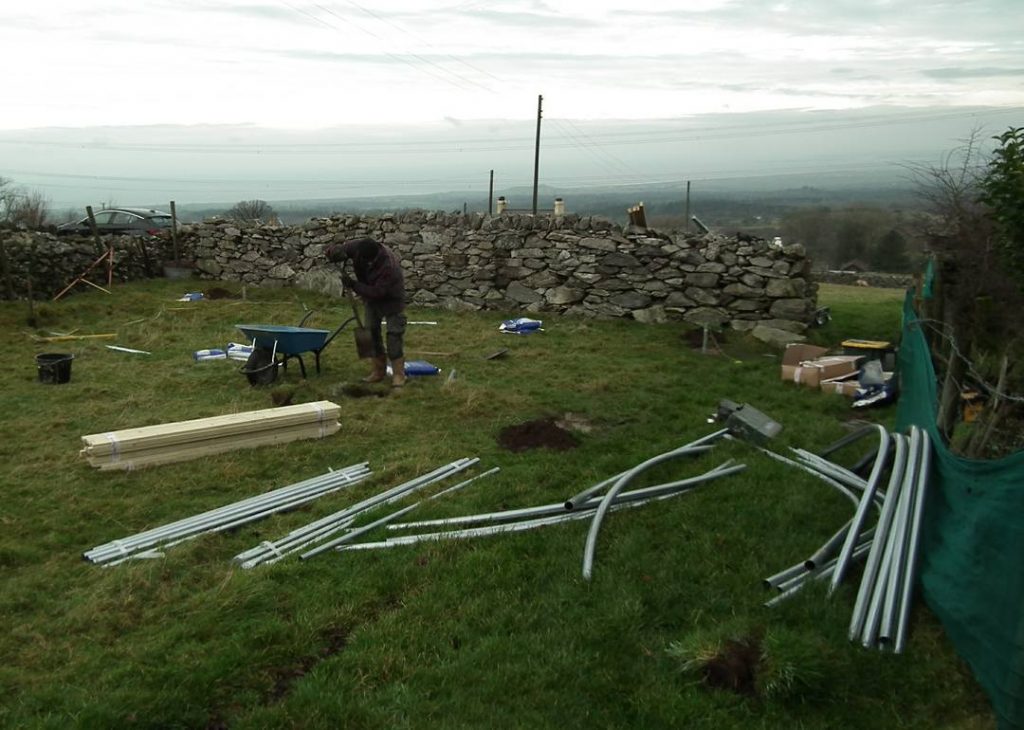 Digging the holes for the support posts to be concreted in.

The support hoops slot onto poles which are set in concrete in the ground so 8 holes were dug. You can use anchor plates set into the ground which stops the poles from pulling out upwards but because of our stony ground, it was easier to set the poles in concrete.

Rather than a concrete mix, postcrete was used which sets very quickly. It’s more expensive than ordinary concrete but well worth it. One problem, which we got over, is that the site isn’t as level as it appeared to me. It’s not terrible but were about 40cm out from side to side.

It does mean I’m going to have to add some strips to the bottom of the doors and work things out carefully inside.

Fast Progress on the Polytunnel Build

Once the post supports were done, things progressed at an incredible rate. The hoops were in, main ridge-bar fixed and crop-bars on within a few hours. Things seemed to slow down a little after this as the next tasks, whilst important, aren’t so obvious. 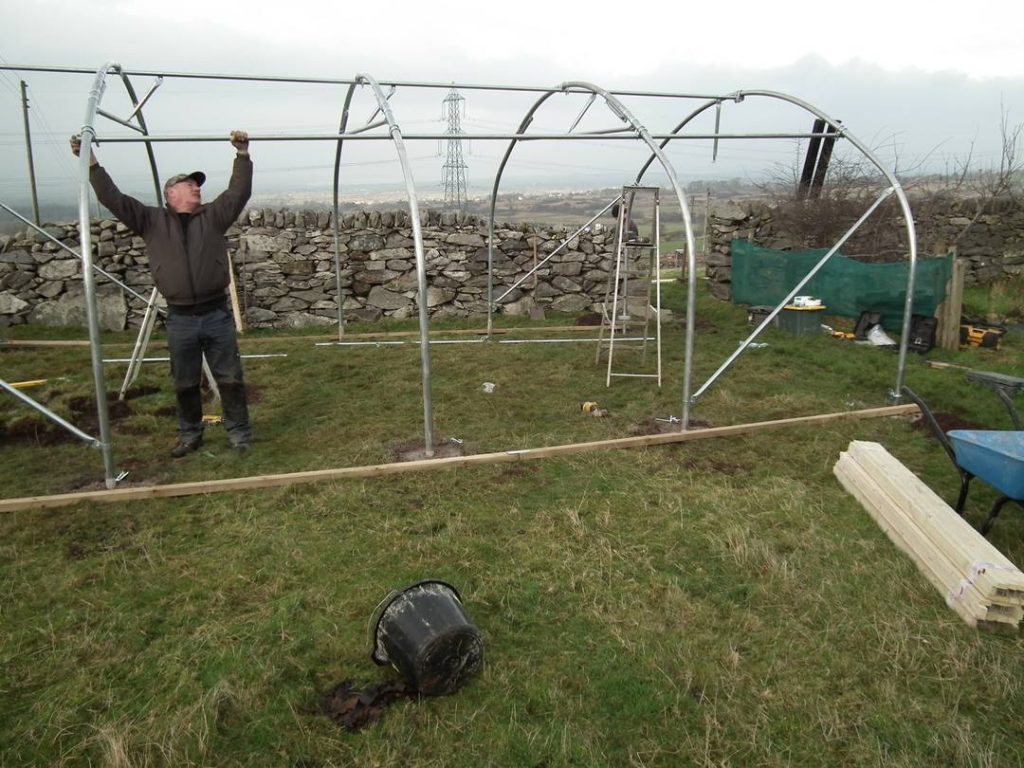 Hoops up on polytunnel frame, side bars going on to add rigidity

Hot-spot tape was applied to the hoops and various strengthening bars attached and tightened in place. Reminded me a little of Meccano – one of my favourite toys as a child. 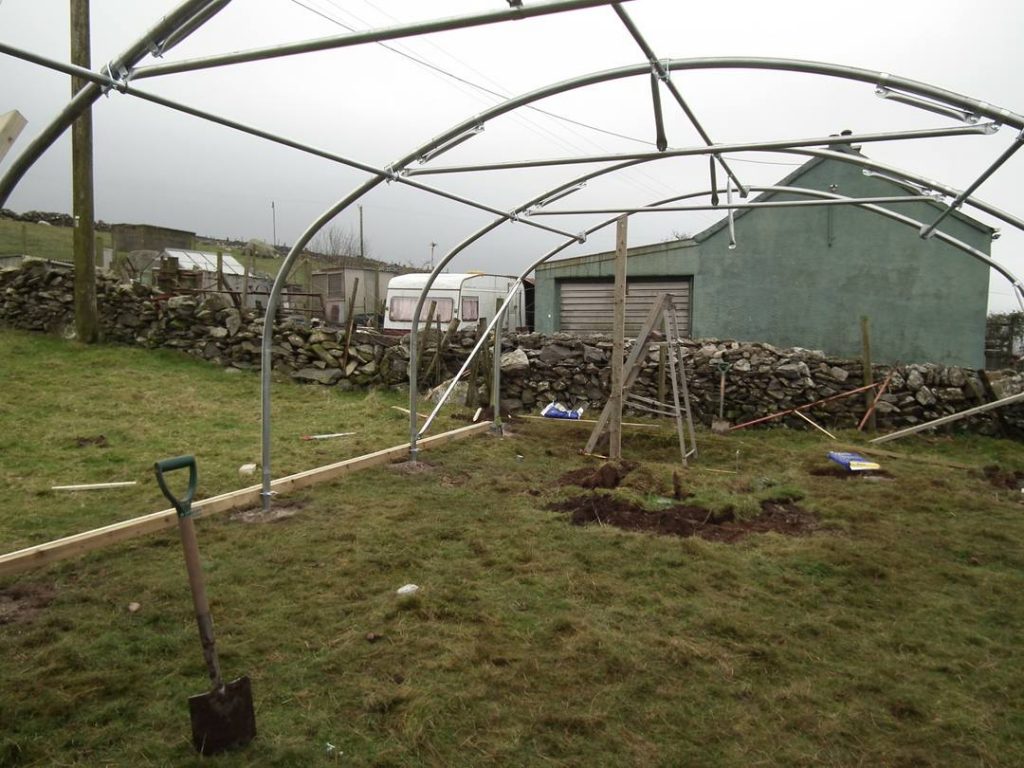 Polytunnel Frame from the inside. First door post fixed in place.

Next the support posts for the door were set into concrete and connected to the hoops at the front and rear. The doors were fitted and temporarily battened in place. So far the job had taken 8 hours and the light was fading fast. We’re at the winter solstice so the shortest days of the year. 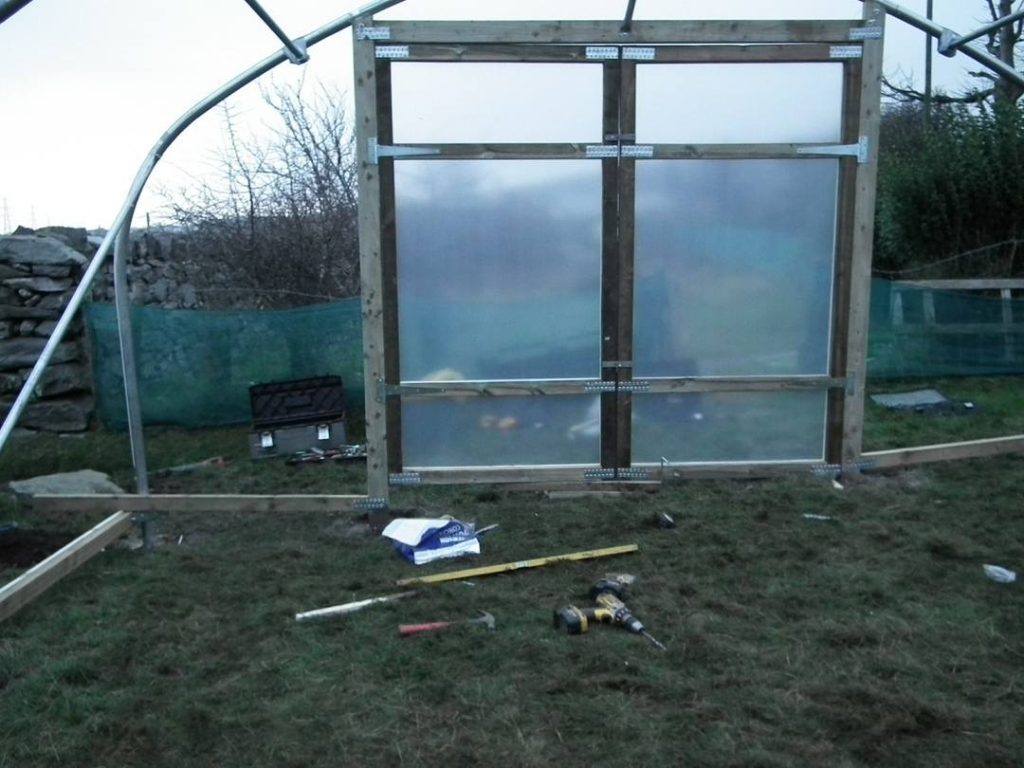 Doors For Polytunnel in Place. But the light was fading fast.

Wednesday morning they arrived with the dawn, just after 8am again, and headed straight up to the tunnel. I thought I’d be useful so cooked up a couple of breakfast baps for them by which time the heavens had opened and the wind had got up.

On goes the Polytunnel Cover

Nothing stops these guys – they’d got the cover on already and were fixing it on around the doors. After the skin was completely secured, leaving me with enough ‘bits’ of polythene to make some useful cloches, the last hardware like door hasps was fitted.

I have to say how impressed I was with Mick & Brent, the construction team. I wasn’t surprised by how professional they were and what a good a job they did – you sort of expect that from a top firm like First Polytunnels – it was the way they just didn’t stop.

Well, that’s not quite true – I did manage to get them to come in and sit down for a cuppa when they’d finished work on Tuesday night. They even gave me some good tips for setting things out inside the tunnel prior to heading home. 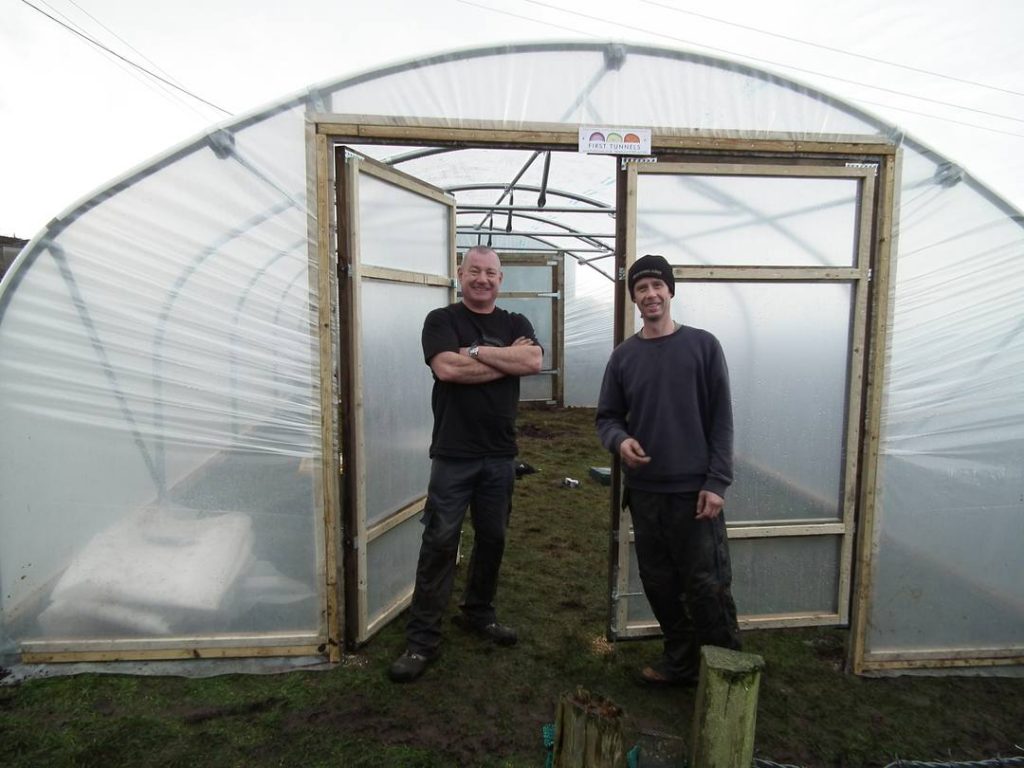 Mick & Brent who did a sterling job building the tunnel in challenging conditions. And they even kept smiling!

5 comments on “Building a Polytunnel”

Leave a Comment Here on Building a Polytunnel Cancel reply