Power to the Potting Shed 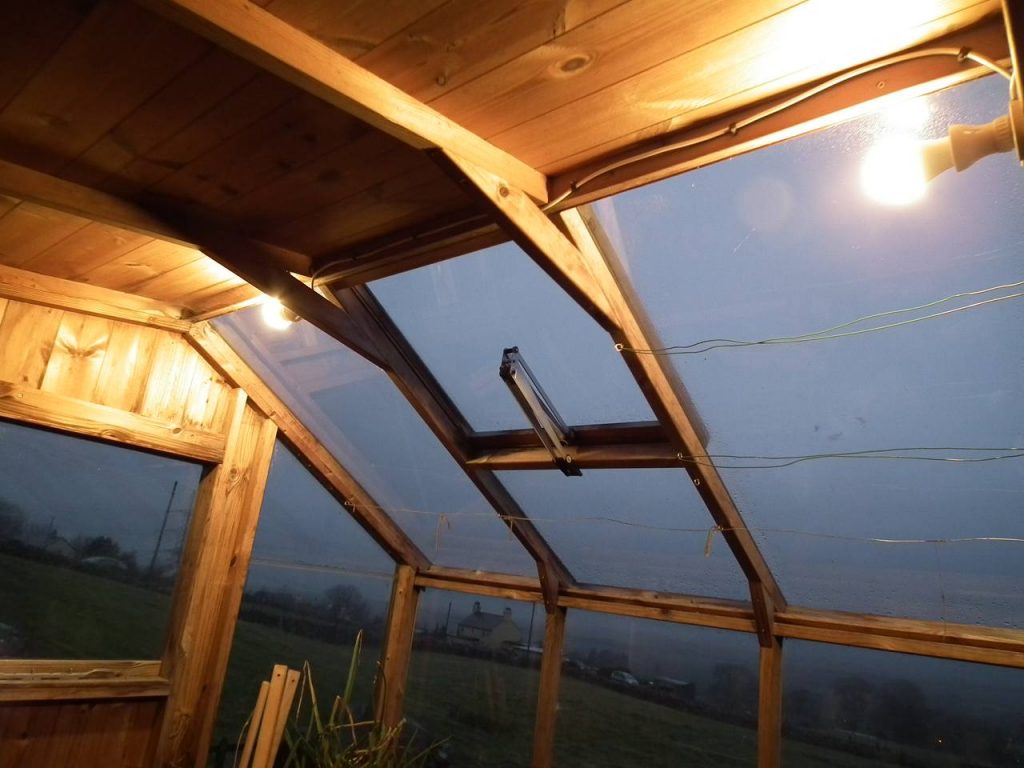 Lighting working in the potting shed

Having got the main power cable through to my Swallow potting shed on Sunday, on Tuesday I decided to get things wired up. I went through my bits but as is always the way, I’ve loads of things I don’t need now but was short of what I needed for this job.

Drive over into Caernarfon and sort those out at Stermat. I think it would be easier to list what they don’t sell rather than what they do. It’s a brilliant proper hardware shop and very keen prices too.

I needed a few other things while I was in the metropolis like some tongue & groove to build a door for the old pigsty shed. First rule of living in the sticks is to combine journeys or pay a fortune in fuel. By the time I’d finished it was already going dark so that was the day done for outside work. 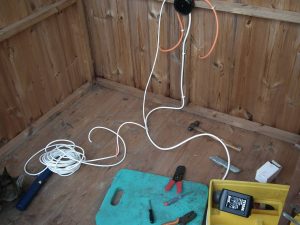 The junction box finally wired up with power and lighting cables for the shed.

Wednesday it was back to the shed after an early lunch. Ran the Arctic grade extension cable from the shed across and into the greenhouse, then fixed a rubber plug socket to the end.

Back in the potting shed where I connected a 1.5 flex for a socket and a 0.75 flex into the junction box along with the 2 main cables. This was not an easy task. Get the earth wires in and then the live but the earth’s pulled free. Finally got everything secure and safe after some serious talking in Anglo-Saxon to it!

Made a start clipping the cables but the light was going fast. So far this job is not going to the envisaged time scale as proper builders say when things take longer than planned. 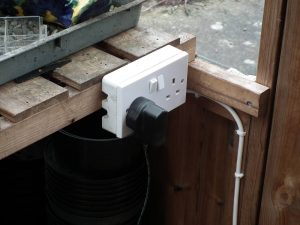 Thursday started well, finished clipping the cable around to the double socket and quickly connected that up with no problems. Back inside for an early lunch and then the fatal mistake of answering a few emails. Eventually escape back out at 2.30.

By now I’m back in a race against sunset. Clip the lighting cable round to the door and up the frame to where I fixed an inline switch. Thence up to the apex of the roof and the first light fitting which daisy chained off to the second fitting.

I nearly got it done but with heavy cloud rolling over outside, it was that dark I just couldn’t see to fix the last bit. So far a job I thought would take about 4 hours to do is moving into its fourth, admittedly short, day. 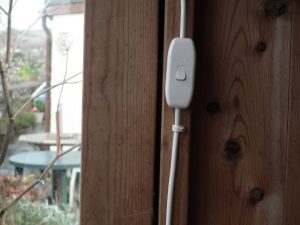 Inline Light Switch by the Door

Friday morning was another visit to the dentist as my temporary cap turned out to be more temporary than hoped. After lunch it was back out and a five minute job to fix the last batten lamp holder up.

I was only slightly nervous when I switched the power on. Nothing went bang! So, I now have power and light in the potting shed.

4 comments on “Power to the Potting Shed”