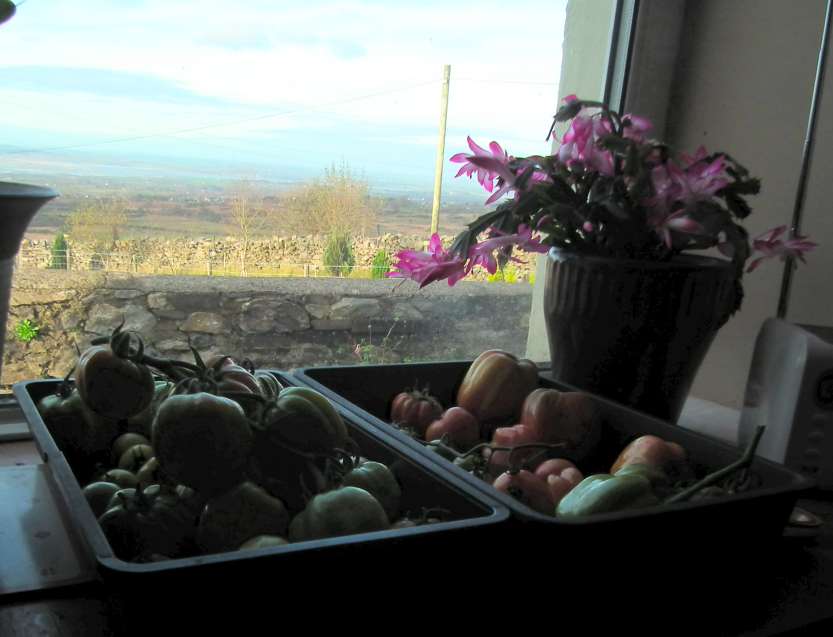 Ripening Tomatoes in the window

Well the good news is that the torn calf muscle problem is getting better, albeit slowly. I managed to get out to the greenhouse and the last of the tomatoes came in before the frosts hit. They’re in seed trays in the window to finish ripening.

Judging by the the way my calf felt afterwards, I think I may have been pushing a bit too hard. At least I’m getting around without a stick now, if a little slowly. It’s so frustrating, the weather has been lovely here. Crisp blue skies and sunshine although very cold. Perfect weather for digging and other heavy jobs like turning a compost heap that keep you warm. Not for me though, within minutes of going into the cold I can feel the muscle complaining.

I’m fine indoors so long as I don’t spend too long sitting with the leg bent in one position or standing. I dare not drive either. Flexing the foot as you do to press the accelerator or more importantly the brake is a bit dodgy. At least it’s going the right way, healing. I’m told that the more I avoid straining it, the faster it will get better.

Anyway, back to gardening. We’ve had a couple of hard frosts which is great. Freezing off all those slugs and snails so we should have less of a problem with them next season. I honestly think that warm, wet winters like last year are the worst for gardening here.

The tomato plants are now turning into compost in my hotbin composter which is in need of emptying. It’s a really great bit of kit turning all our kitchen waste along with some garden waste and browns like card and bark peelings into really nice compost.

Because it’s sealed there’s no problem with cooked food attracting rats and mice or smells. To work properly, it needs emptying when it fills with compost. That’s a job I definitely am not up to tackling until this leg is better.

The greenhouse is looking very empty. This is no bad thing as I want to give it a thorough clean and fumigate before next season which won’t be that long coming.

The power will come from the outside plug socket on the side of the outside loo. If I ran a permanent supply I’d need to follow regulations and get it done or at least checked out by an electrician. As it’s a plug in connection I can do it myself, as long as it’s safe of course.

It’s funny, we have all these electrical safety regulations that other countries seem to survive without. I remember being told you must have an electrical socket by the basin in Spanish bathrooms. Then again, the chap who told me that had an answer to plugging in a mixer in the kitchen without a plug on the flex. He stuck the wires into the socket and kept them in place with matchsticks. Did the job for him!

I’ll be a little more sophisticated. The cable which is 2.5 mm flex that can be used at low temperature sold for connecting power to caravans will go into the shed connected to a junction box.

The box splits the power running across into the greenhouse and to sockets in the shed. These will feed the propagators which are all pretty low powered. A maximum load of about 400 watts if everything is going full tilt.

I’ve 2 small propagators without thermostatic control and they’re fed through a home-made rig that takes the power in and feeds it via a frost-stat to a double socket so they only come on when it is below about 5 degrees.

2 comments on “Getting Better, Slowly”

Leave a Comment Here on Getting Better, Slowly Cancel reply