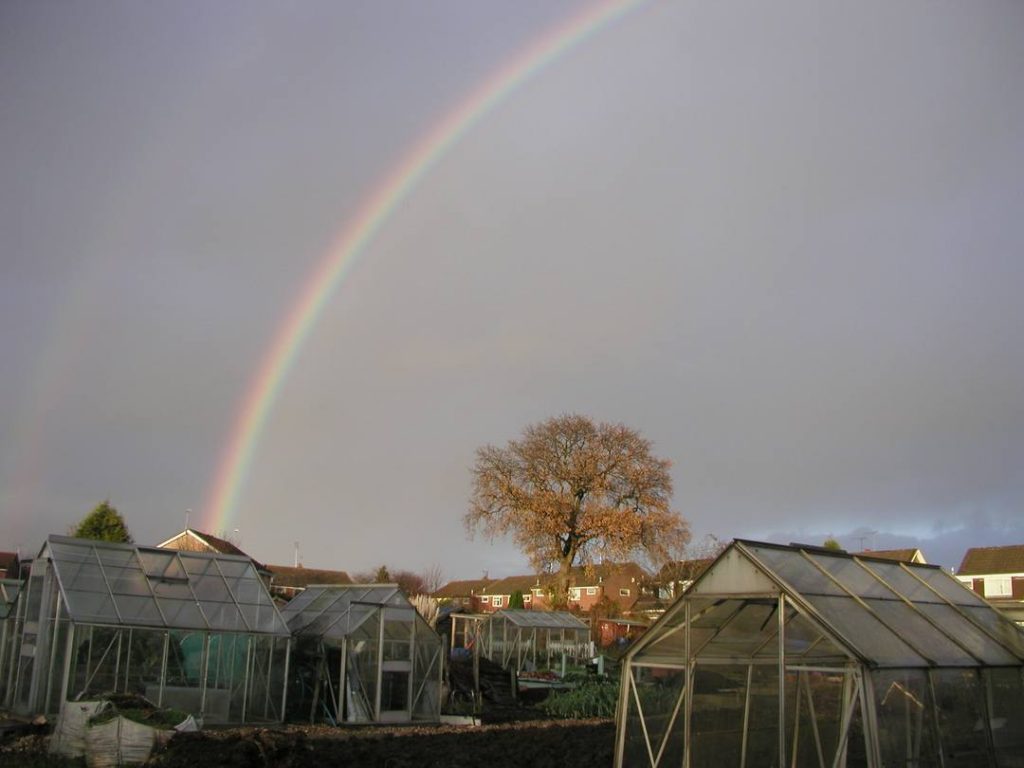 Rainbow Over Allotments – we’re getting warmer and wetter years than we used to.

I’ve been very cautious with my torn calf muscle. It’s reached the stage where most of the time it feels normal and then I’ll do something like stretch up on my toes and BAM! Oh boy, that hurts. The last thing I want to do is make it worse. So more time than usual for reflection.

Weather Variations in the UK

Watching the weather the other day I was struck by the variations we have in the UK. We all know that the north is colder than the south. It’s a fairly gradual process but just a two hour drive up or down the motorway can make a week or more difference to the start of spring and onset of winter.

Less obvious but just as important is the difference between east and west. Here in the west the best weather often seems to be spring and autumn. Quite a few times in the spring Porthmadog, which is 15 miles from us, has been the hottest place in the UK

Summers are rarely fantastic here in North Wales but in the summer the weatherman assures me it’s glorious in the south-east. Come autumn though and Wales and the west come into their own until the storms start to roll in, one after the other, from the Atlantic.

If you go over to the Met Office Climate Maps pages you can see the differences between areas. The west of Wales and Scotland ‘enjoys’ an average rainfall ranging from 1,000mm to 3,000mm with a few high points above that.

Over on the other side of the country there are areas where the rainfall falls to 600mm or below. For comparison, a desert is defined as an area that receives less than 250mm of rain a year and the average rainfall in much of Spain is around 600mm pa

The average growing season in the UK is actually quite even. It drops down in the centre of the country and drops even further in the mountains and high moors. But the coastal areas of Wales and the south and south-east of England average around 300 days a year.

Where are we Going?

Interestingly the Met Office maps also show the same maps averaged over different periods of time. It looks like the trend is longer growing seasons and wetter years. The effect on gardening is obvious. Quite how far this trend will go is another subject but certainly gardeners of the future are going to have to adapt.