Apologies for not posting for a while – there’s not been enough hours in the day! As much as anything else, we’re working hard on the poultry pages update. Like the recent update to this web site, it’s a lot of work but hopefully worth it. 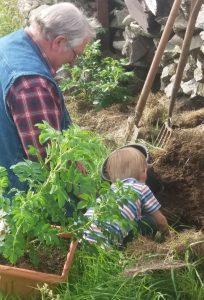 Grandson helping plant a rose – his turn with the trowel!

Yesterday being fairly decent, well at least not raining, got a few more jobs done outside. Val asked me to plant a couple of climbing roses by the wall and grand son Gabriel insisted on helping.

The roses were in pots so the holes were dug wider and deeper. Then a mix of soil, multi-purpose compost and slow release fertiliser in the hole. This should encourage growth and ease the transition from the pot’s compost to the rough soil.
Sometimes when you put a compost grown plant into a poor soil the roots prefer to keep circling rather than move out – so easing the transition is quite important.

Whilst I applied some mycorrhizal fungi to the roots, Gabriel helpfully added extra fertiliser to the hole behind my back. I scraped out what I could but expect the fastest growing rose in the world! Kids can be lovely, but never turn your back on them.

Happily my son-in-law was also able to give me some help. A little more usefully as well.

We’ve got a couple of fields that a local smallholder runs some Texel sheep on which keep the grass down. However, they don’t eat thistles so son-in-law headed out with the brushcutter and chopped them down. They’re just starting to flower so it is the ideal time to cut them as they’re putting all their energy into seed production. With luck they won’t re-grow.

Next he ran the mower over the small field where I’ve got the raised beds. That was really over-grown and tricky. If you just let the mower run as normal, the long grass clogs it up and stops it – even on the highest setting.

There is a way though, we tilt the mower so the front wheels are a couple of inches high and it will go through. Then come back the other way with the wheels on the ground. In an ideal world, I’d go over it again the next day but this being Wales, it rains instead. 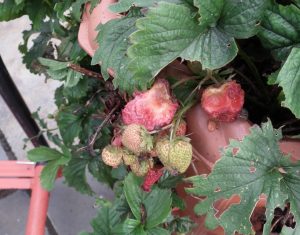 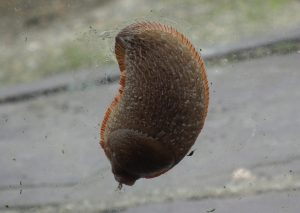 My biggest problem, apart from lack of time, has to be the slugs and snails this year. I knew it was going to be bad after the mild winter but it’s worse than I feared. The ideal winter should be short and sharp. Just a few days of minus 5 is enough to make a big difference to the pest population. The year we moved here we had that really cold winter with lows of minus 15 and I hardly saw a slug the next year.

In the greenhouse it’s snails that are the problem. I’ve lost a couple of the onions, eaten away at the base by snails. That’s something I’ve never had before. I’ve been through the house, picked out every snail I can find but the next day they’re back in force.

How they’re getting in is a mystery. I can understand a slug squeezing through a tiny hole but a snail has a shell that won’t squash and squeeze. Missing one or two on my search I can accept but dozens? Maybe some things are not meant to be known by man!

Even the strawberries in the barrel are being attacked. I’ve tried scattering pellets around the base (it’s on the patio) and some in the top but still keep finding the juicy ripe ones half eaten.

I could get quite paranoid about this, I step out after dark and they’re crawling up the walls and when I look out of a window I see a snail making his way up it.

Maybe this is the answer I need from Cathy of Suffolk who emailed to say:

Thought this tip may be useful! My cauliflower seedlings were getting well chewed in the greenhouse so I rubbed vick round the top of the pots and they haven’t been touched since and even the whitefly have kept off!