Since the weather has decided to be kind, I’ve been catching up with the plots and sowing. 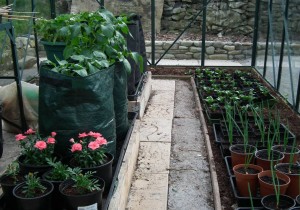 With some seeds like beans and sweetcorn you can’t get easier to handle but when it comes to seeds like carrots and lettuce they’re so small that handling is a problem. Fluid sowing is one way around the small seed problem but it’s a bit of a fuss. Mixing up solution and seeds is a bit of an art in itself.

The seed merchants have had an eye on this problem and their answer of seed tapes and mats certainly do work and answer the problem but you’re stuck with the spacing that they feel is appropriate.

With normal carrot seed the advice is to sow thinly and then thin out to the correct spacing. This is fine until your fingers twitch and suddenly you’ve a thickly sowed spot to sort.

I have tried broadcasting over an area and then thinning but it’s not ideal. Leave it too long and you’ve a carpet of seedlings that are all too close to develop into a useful sized root. 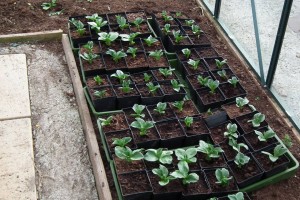 Broad Beans in Greenhouse
Ready to plant out now

The answer I really like is pelleted seed. Large enough to handle and sow individually whilst giving you total control on spacing so you space as you feel right.

It’s true that pelleted seed is much more expensive, about 3 to 5 times ordinary seed on average but the amount wasted is next to nothing. When direct sowing I reckon 100 pelleted seeds is as useful as 1,000 normal tiny seeds in the end.

The big drawback of pelleted seed is lack of choice for variety but that’s no reason not to use them when the variety I want to grow can be found.

I’ve used pelleted seed parsnips, Gladiator, at 8” spacing in staggered rows which has nearly filled one raised bed. The space left at the end was filled with carrots, Early Nantes 2 at a much closer 3” spacing each way in staggered rows.

A second raised bed has been given completely over to carrots. First of all Autumn King which is a good old maincrop variety. It stores well in or out of the ground and I like the strong flavour. Great in winter stews or mashed up with parsnips.

Sweeter early carrots, which are lovely grated in salads or as a side dish can be too sweet and mild for some dishes.

I’m trying a new (to me) variety this year – Artemis. It’s a Nantes style but reported to stand well and even over-winter in the ground. I’ve also put a few more rows of Early Nantes 2 into this bed leaving some space for a couple of successional sowings. 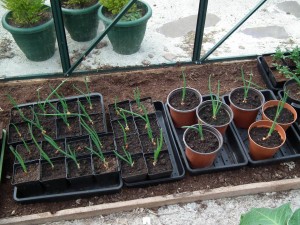 I should have more than enough carrots and parsnips from those two beds to see us through a year.

Although it’s still in winter mode the greenhouse is quite full. Despite being three quarters through April and having had some really warm days there’s another cold spell here. The shelter from the greenhouse makes a huge difference.

I sowed 80 broad beans in pots in the greenhouse to get them off to a quick start. They’ve done really well, only 4 have failed to come up, a 95% germination rate! They will be occupying another of the raised beds

The Sturon onion sets I’d got left over and planted into pots have shot up in the greenhouse. Compared with the sets I planted outside before them, well they’re a good month ahead.

The idea was that the ones in 3” pots would be planted out and the ones in the larger pots grown to maturity in them. I’m wondering about potting on rather than planting out but still in two minds about it. 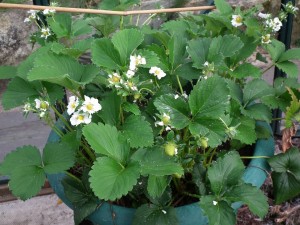 I took a couple of tubs with strawberry plants in to the greenhouse to overwinter and it looks like we’ll have some fruit in a few weeks. Considering the strawberries outside are only just waking up after their winter sleep, it’s amazing.

One small problem with the strawberries is they’ve got whitefly. I’ve given them a spray to knock them back for now. When they go back outside I’m sure they’ll stop being a problem but I think I need to fumigate the greenhouse before it really gets going so I’ve ordered some Dead Fast Fumigators from Amazon