Apologies for not posting for a while – it’s not been the best of months to say the least. You know you’re in trouble when the first thing the doctor says is “Have you made a will?” It’s not quite that bad, but I think I’ve been shown the yellow card.

Apparently, if I get more exercise and stop doing anything pleasurable I’ll live a lot longer. Or as the joke goes, it will seem a lot longer anyway. 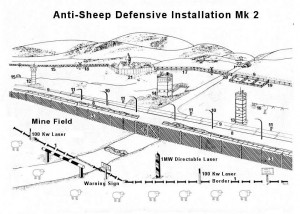 Well the Berlin wall is nearly finished. That’s what we’re calling our sheep-proof boundary. The stone walls have been repaired and holes plugged but we know these Welsh sheep like nothing better than scrambling up and over the walls.

To stop them getting over we’ve inserted metal brackets in the wall which support 3 strands of barbed wired. Stringing barbed wire is a lovely job, if you enjoy pain and bleeding from loads of scratches.

It’s annoying how much time and money is going in to the Berlin wall but the alternative is years of arguments and annoyance as marauding woolly monsters ravage anything that grows. 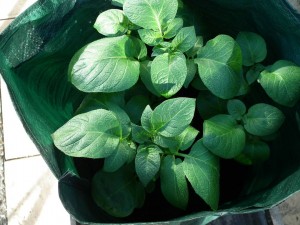 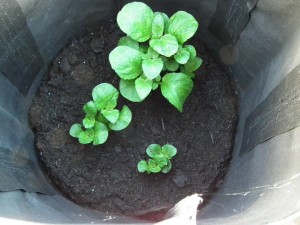 The weather is best described as variable but yesterday took the prize, starting with a bit of snow but finishing with warm sunshine. Still, it’s not the first April to have snow although it’s not common.

The potatoes in the sacks in the greenhouse have all broken through but the results are not even. I’d have bet on the Swift coming through first, followed by Arran Pilot and Charlotte (2nd Early) bringing up the rear.

The actual results are: 1st Arran Pilot with Swift and Charlotte in joint 2nd place. Good job I didn’t bet myself!

Being late, I’ve sowed a load of broad beans in pots which are now breaking through and the leeks in modules are germinating too.

As an experiment I’ve started some Sturon onion sets in 3” square pots and they’re doing nicely. I’ll plant them out in a few weeks except for some that are in 6” pots. It’s just a bit of fun but I’d like to see how they do compared with the ones in the soil.

The leeks I sowed in modules are just popping out. I was just at the panic point, thinking they’d failed completely. The cunning plan is to pop the modules on top of compost in troughs giving them depth to grow prior to planting out whilst spacing them to reduce root-tangle.

Question is – is it worth the bother? All depends on how they look come harvest time.

Anyway, I’ll try and post more regularly and to spend less time on the computer as I get more exercise on my diet of cardboard and water. If you spot a contradiction there, I’m ahead of you!