Rain, Wind & Floods for Some

I’ve not posted anything for a fortnight because I’ve nothing much going on to report. The rain and winds continue which makes getting anything done outside a challenge to say the least. 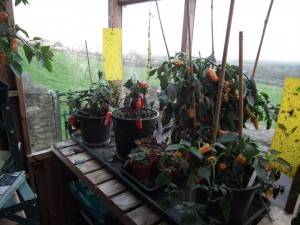 Chilli Peppers in the Solar Shed

The temperatures are more like May than December. Just last night the outside thermometer was registering 10 degrees in the small hours. Because it’s so warm, many things are growing strong that normally would be asleep until spring.

It’s not so bad when it’s brassicas like winter cauliflowers and sprouts growing too well. They are far ahead of the normal growth curve this year. Sprouts don’t store well but they do freeze well. Just blanch for 3 minutes, dry off with a tea towel and freeze on a tray prior to bagging.

Don’t forget when you come to use them that they’re almost cooked. Just defrost then drop into a pan to heat through with some melted butter, lemon juice and season with a little salt and black pepper. I’ve tried a number of sprout recipes and that’s still my favourite method.

Cauliflower can be frozen but I think it’s better fresh. Traditionally it was dug with a root ball and soil attached and then hung upside down in the cool, dark store shed. It keeps remarkably well like that. The more modern, but I’m not sure superior, method is to wrap a fully trimmed head and wrap tightly with clingfilm before keeping in the fridge. 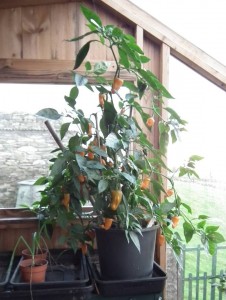 The grass and weeds continue to grow well. There’s nothing to be done about the grass, mowing isn’t possible when it’s soaking so it will just have to look unkempt. There’s not much that can be done with the weeds in this either.

One result of this weird weather is we’ve still got a lot of chilli peppers in the solar shed. I reckon one of them would make a nice table decoration – just add a bit of tinsel perhaps!

There’s not even a glimmer of good weather on the horizon. No Christmas on the plot! Still, catching up with a lot of indoor jobs and work. I swear the computer is worse for my back than digging!

Unlike some people we’ve not had any flooding as such but Cumbria has really suffered. If you’ve been flooded, you might want to check out this article I posted back in 2014 after the floods then: Safe Crop Growing after a Flood

Leave a Comment Here on Rain, Wind & Floods for Some Cancel reply