Having lost half the strawberry barrel to a ravening hoard of locust-like sheep, I need replacements. Luckily for my pocket strawberries are really easy to propagate. 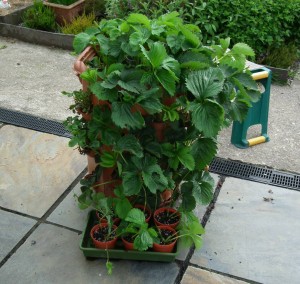 Strawberries naturally throw out runners with a plantlet at the end that will put down roots and grow into another plant. Left to themselves in the ground they’ll gradually expand their territory, spreading in all directions. The normal way of propagating is to put some compost into a pot and peg the plantlet onto the surface so it roots into the pot. I use some garden wire bent into a narrow U to make the peg. After a week or two, cut the runner stem off at the mother plant and at the new plant which can be then be grown on in the pot to be transplanted on at your leisure.

Incidentally, I use a multi-purpose compost mixed with about 25% by volume of perlite to lighten it and allow good initial root development. I’m quite sold on the benefits of perlite and vermiculite but that’s another story.

An Experiment With Strawberry Propagation 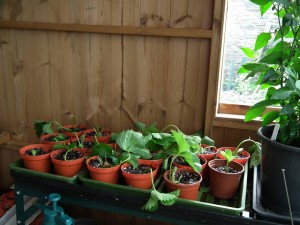 The pots are sitting in a centimetre of water, so the compost won’t dry out. I’m not sure if it will work or I’ll end up with 16 dead plantlets, but nothing ventured, nothing gained. The worst case is I’ve wasted a bit of compost and an hour. It will be interesting to see either way. I suspect it will fail as the plantlet loses water through the leaves and hasn’t the roots to replace it. However, it just might have enough strength to put down roots before it dies of dehydration.

The first cucumber of the year came off the vine yesterday. Wonderful! I’d nearly forgotten that cucumber can have a taste. Shop bought always seem to be so watery and insipid. There’s another couple nearly ready, one for my daughter (grandson loves cucumber) and one for the neighbours.

Val’s been patiently harvesting the blackcurrants. She removes the stalks and then just pops them into the freezer until she’s ready to use them. They won’t keep forever just bagged and frozen but they’re fine for a month or two. We’ve got 8lbs so far, which will make jam, blackcurrant brandy and we’ll still have some left over for something else. 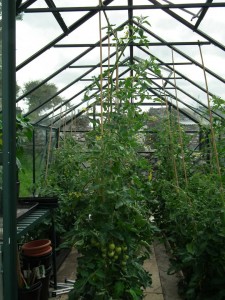 Tomatoes in the Greenhouse

So far, touch wood, we’re having a fantastic year for tomatoes. Only a few ripe as yet but there’s a lot of green ones starting to ripen. I’ve stopped (cut off the growing tip) of some of the plants because they’re as tall as I can reach.

I remember visiting Flavourfresh commercial tomato producers some 7 years back (boy, doesn’t time fly!) and marvelling at them getting 27 trusses from one plant. I’m more than happy with 8 at home and usually lucky to get up to 6.

Last, but not least, the cactus is in flower. So beautiful but sadly they only last a couple of days. 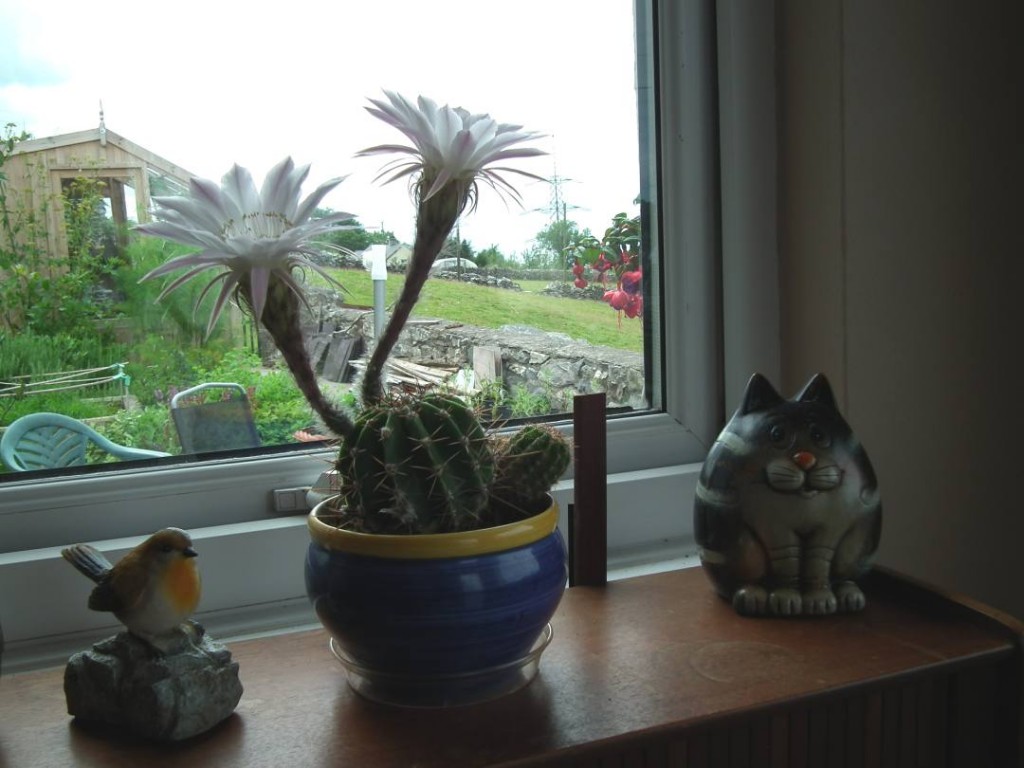