Has anyone seen the summer? I’m sure it was supposed to be here! Just when you think you’ve got a handle on the weather it changes.

Saturday wasn’t bad, not brilliant but at least it wasn’t raining. I got quite a bit done outside, cleared and weeded a couple of the raised beds and carried on with some landscaping.

Since they were predicting rain for Sunday I put the drying rack into the wood store and moved the garlic and shallots undercover. That’s another job I need to get on with, cutting wood and moving it into the dry ready for winter.

This year I’ve grown quite a lot of elephant garlic. I really like garlic and elephant garlic with its huge cloves certainly seems like value for the space it takes to grow. No matter its size, elephant garlic is very mild and roasted hardly seems to taste of garlic at all. Since I believe it’s actually more a leek than ‘real’ garlic that shouldn’t be a great surprise.

My normal garlic is OK but that’s the best I can say about it this year. Still, I’ve seen smaller bulbs in the shops so not a disaster. As I say, it’s OK.

Late Saturday night the wind started to get up and the rain started. By 1am I gave up worrying and went out with a torch to make sure the greenhouse was secured. Good job I did really as it was blowing strong and in the morning there were chairs scattered on the patio and the wind had ripped off a branch from a fuscia Val’s got in a wall mounted pot.

Monday was just miserable but things improved on Tuesday afternoon. Actual sunshine late on. Val harvested yet more blackcurrants, I think we’re up to 12 pounds now. A few more tomatoes had ripened along with some deep purple coloured peppers and a another couple of cucumbers.

I had to do more sideshooting and tying in with the tomatoes and feed them of course. They’re getting fed and watered every three days at the moment but if things warm up that will move to every other day. 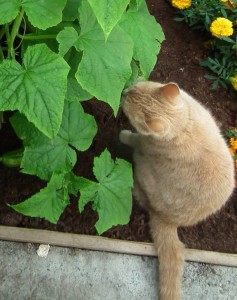 Bit of an odd one. One of our cats, Amber, is blind. Not that you’d know it, she trots around outside with total confidence and even catches the odd mouse. The other cats don’t mess with her – she’s a scrapper and doesn’t know or care how big the other cat may be.

Anyway, the moment I open the greenhouse door she appears from nowhere and makes straight for the cucumber plant where she starts eating the leaves. I shooed her out but the moment my back was turned she reappeared munching away. I’ve seen cats eat some odd things, my first cat had a thing for chips although they always made her sick, but never one eating cucumber leaves. 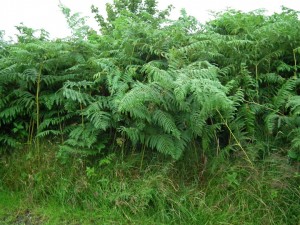 Locally we’ve a lot of bracken. In fact over 4% of Wales is covered in bracken and it’s spreading. Because it’s poisonous and can cause cancer the land it takes over is not good for grazing animals. It can be used to make compost though and cutting it down will eventually kill it back

I spent a day fact checking with various scientific papers and have written an article on it which you can find here: Bracken, Controlling & Composting Bracken which is a carcinogen 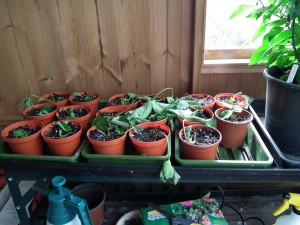 Propagating Strawberries in the Potting Shed

The experiment of potting up runners after cutting them from the parent isn’t looking too good. I did notice one or two without leaves were looking as if they may make it so I cut the leaves off most of the plantlets.

It’s only been 6 days so too early to call it. Then again, if you don’t try things you don’t discover. When I was 6 I planted a burnt stick from a bonfire, much to the family’s amusement. I had the last laugh, it grew into a lovely fuscia. That’s one of my earliest horticultural memories.

Leave a Comment Here on Where is Summer? Cancel reply