It’s been a messy week, but I’ve managed to get some productive time outside. One of the weather patterns we have here is that fairly miserable days brighten up no end towards the end of the day. With the long days we’re enjoying now that means I can keep going until 8pm or even 9pm. 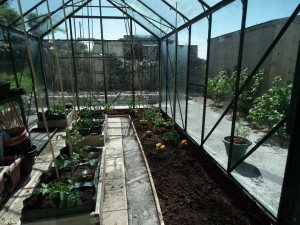 16 tomatoes went into the greenhouse, leaving 2 small plants to grow on a bit in the potting shed along with the 2 Crimson Crush plants that arrived free from Dobies to trial that are now potted and growing on in the potting shed.

I’m using the solar potting shed rather than the greenhouse for seedlings because it provides loads of light with its front and overhead glazing but because of the rest being wood, doesn’t cool down as quickly and as far the greenhouse. The younger plants in particular benefit from the more even temperature.

I’ve still to plant a cucumber and I’ll grow some lettuce in the border. On the bench I’ve room for an aubergine and a couple of chilli peppers. The sweet peppers will be grown in the solar potting shed.

Preparing to Plant out the Windbreak

I’ve 20 leylandii to go in as a windbreak in the top field. My intention was to spray off a strip of grass but having given it a bit more thought, I’m handling it organically.

The plan is to mow the grass fairly low, plant the trees and then lay a decent quality weed mat over, which will be covered in bark chippings. The mat can go straight onto the grass, it will kill it off and stop it competing with the small trees.

The mat will be held down with copper staples. Plastic pegs are all but useless on this stony soil. The mat will allow water through so the trees will be fine.

Mowing was not so simple. I’m sure this soil grows rocks! About 4 times I heard the crunch as the blades hit a rock so I had to stop mowing and firtle about in the grass pulling out rocks that should be in the wall.

Anyway, as I had the mower going I just carried on cutting the rest of the field. Didn’t do it all by any means but some is better than nothing. The clippings are being used for mulching on the other side of the holding around the fruit bushes.

I’m learning new techniques here to cope with large area and mulching with grass cuttings saves a lot of time and effort. Of course the mulch rots down into the soil over time, but that’s a benefit in itself as it improves the soil.

The lack of organic matter in the soil is noticeable as the worm population is low. I’ll know I’ve cracked it when every spadeful of soil has some worms in it.

Up by the old pig-sty that’s now a shed, I’ve a patch that has gooseberries in front and then a rough grassed patch to a tall dry stone wall where a self seeded fuchsia is doing well in the corner.

I’d sprayed off the grass and when it died burnt it with a flameweeder. I suppose I could have stripped the turf but it was easier to run the Merry Tiller over it, breaking it up and cultivating the soil below. The problem being, as usual, all the rocks. The Merry Tiller generally just kicks them up whereas a spade bounces.

The cherry went in a few feet from the wall leaving room for a loganberry below, towards the gooseberries, once I’ve the supports erected. Once again, covering with grass mulch will stop weeds and rough grass from growing whilst improving the soil.