Make Your Own Strawberry Barrel

Back in April I wrote about setting up my strawberry planter on the patio which set allotment holder Louise Nowell to thinking it could be an answer for her.

It all began because she needed to dig up her old strawberry bed where the plants were getting old (strawberries only produce well for 3 years) and which had become infested with bindweed. She needed somewhere to grow on some runners.

First of all she spent some fun time researching on the net where she came across some people cutting slits in plastic barrels and then softening the plastic with a blow torch prior to forcing the slit open with a stake. There was one woman making a strawberry barrel with drill, jigsaw and blow torch in her sitting room. 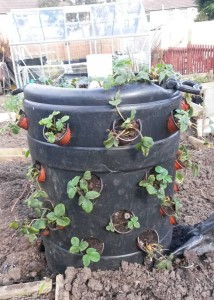 I can’t say I’d recommend messing around with a blowtorch and plastic barrel in the house. Far too risky for my money; a moments inattention and the plastic could be burning, producing toxic smoke in a room. Seriously dangerous.

Anyway, having decided what she was going to do, Louise obtained a barrel – slightly smaller than the 55 gallon one she was after but large enough. Then she borrowed a hole saw from her neighbour and spent some enjoyable hours drilling holes in the sides. She then put a watering tube in the centre of the barrel into which she can insert a stick to support netting if birds prove a problem.

Finally she installed cups to hold the plants and soil in the holes. She used little shuttle tray pots which cut in half easily with scissors for the cups. Initially she considered glueing them in place but it really wasn’t necessary as the soil keeps them secure.

As she told me, “Mine is for the allotment so doesn’t need to be as pretty as on patio.” but I don’t think it looks unattractive anyway. I do love the sheer inventiveness of allotmenteers and their ability to recycle waste into useful aids. It’s frugal and makes total sense ecologically.