The last week seems to have raced by, but we’ve managed to get a bit more done outside. Sometimes I get a bit down by how long things take but a lot of the jobs are things that only need doing once. 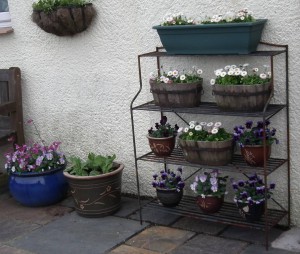 The plant stand greets visitors to the house

Val’s hardened off her annuals that were in the potting shed and they’ve gone out in pots and troughs around the house. I know I joke about flowers being just expensive compost material but it is nice to see the house looking bright and cheerful with the colourful flowers around it.

It would be good to have some hanging baskets but when the wind gets up they’re literally horizontal and swinging violently.

We’d picked up some fruit trees and 4 out of the 5 have gone in. The thing is not to cut corners when planting them. Start with a good large hole with the soil in the base well broken up with a fork. On a normal soil that’s a half hour job but with all the rocks here it’s a two hours or more job.

From each hole I’ve filled a large bucket with rocks and stones. Anything being bigger than a hen’s egg gets fished out. With the greengage I hit a rock too big to get out so it moved a foot to avoid it.

Once the hole was dug, added about two pounds of hoof & horn mixed 50/50 with bonemeal and a couple of ounces of slow release pelleted Miracle Gro slow-release fertiliser. This is well mixed into the soil and should get the trees off to a really good start.

On top of that a couple of inches of soil mixed with compost. I don’t want to burn the roots with the fertiliser and by the time they get down to the fertiliser it should be fine.

Added mycorrhizal innoculant (Rootgrow) to the holes before putting in the tree. I wish I’d discovered this years ago, but having seen so many ‘miracle fertilisers’ turn out to be nothing, I’m very cynical. Still, when the RHS push something it has to be worth trying and my simple trial showed fabulous results.

The greengage went in to the area to the rear of the greenhouse along with a pear tree near to the existing pear. An apple went in near to the Welsh Bardsey apple which left a couple of sour cherries.

One cherry has gone in between the gooseberries. I don’t think it will shade the gooseberries significantly and interplanting makes good use of space. We’ve got 3 acres here but precious little sheltered flat land to grow on. The second will be going in up from it when the area is cleared.

Having prepared the borders, I thought it a good idea to to set up the supporting canes for the tomatoes and fill the large growing bags prior to planting up. Usually I end up trying to work around things and end up with wobbly supports that keel over when the plants are fruit heavy. Nice to be ahead for a change!

Having got that done, I was ready to take the tomatoes from the potting shed and plant up but it felt cold, even in the greenhouse so I thought another day for them in the warmer potting shed would do no harm.