Thursday was a reasonable day, we even had some sunshine so I thought I’d get the greenhouse set up. Last year due to getting the new greenhouse up late, I’d grown in pots sitting in the border but this year I’d like to plant directly into the border. 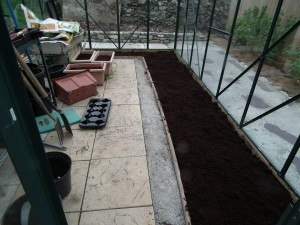 The benefit of growing in a border is that it holds water and allows plenty of room for root growth. The disadvantage of border growing is the soil will need to be changed. Ideally you should do this every year but in practice every other year is sufficient.

I decided to dig out the border to about 6” deep and then break up the soil below before filling with some multi-purpose compost to provide a good growing medium.

Taking out the existing soil involves breaking it up with a hand fork and then picking out the larger stones before barrowing the soil to the veg plot. It’s actually a very slow job as there are so many rocks to lever out and separate.

We had a couple of visitors in the afternoon so I didn’t get as much done as hoped, but then I never do. Off to vote in the early evening and we treated ourselves to fish and chips on the way back before settling down to watch the election results come in to some silly hour of the morning. What a surprise! So much for the neck & neck polls.

Visit to the Nursery

Friday started cloudy and then it poured. I mean really poured. We headed off to a local nursery (Bryncir) where there were a couple of other bedraggled shoppers, dripping as they examined the plants. Gardeners, a mad lot. 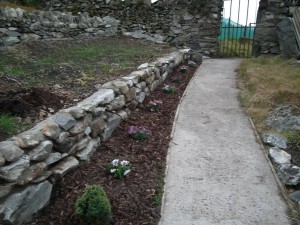 Back home we dried out, had lunch and then 4 hours sleep caught me and the next I knew it was evening. Not very productive. A quick top up trip to the supermarket where I noticed some small but healthy strips of peppers reduced to 60p.

Normally I wouldn’t buy plants from a supermarket. They’ve driven the small shops out and I don’t want to see them do the same to nurseries. Actually I don’t think there’s too much risk of that due to the way they treat their plant stock. It arrives in perfect condition but doesn’t get watered or even proper light so a week later it’s just fit for the compost bin.

I also riddled some soil which was mixed with the ericaceous compost to add body to it before re-potting the conifers to grow on for another year before planting out. As they went in I added some mycorrhizal fungi innoculant to help the roots and some slow release fertiliser to feed them.

Sunday the weather had changed back to miserable, although not as bad as Friday. Potted on some of the tomatoes and peppers that were pushing their pots in the comfort of the potting shed. 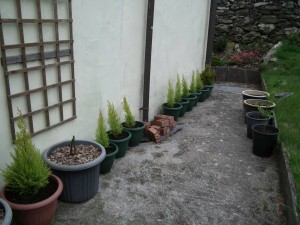 Over to the greenhouse where I filled the border with compost. Hopefully the compost and soil will mix a bit and deepen the growing depth. Another of those multi-year tasks.

Finally I filled three large deep troughs with multi-purpose compost and sowed leeks into them. I’ll keep these under cover initially to help them along faster being quite late. They’re an old French variety we picked up in France, Monstrueux de Carentan 2, which you can get in the UK as Giant Carentan. Mild and very hardy, they should do well.

Leave a Comment Here on Preparing the Greenhouse Cancel reply