Well it really isn’t on. I’m willing to accept some rain in August, even some cool days but this weather is too much. Not merely cool but combined with the wind it’s more like late autumn than summer.

Despite having a sweater on and my padded gilet I was shivering as I ran the Mantis tiller over the raised bed. The Mantis is brilliant for the raised beds; it’s light enough to lift in, very controllable yet powerful enough to turn the soil into a fine tilth down to 9 inches. Ideal for root crops like carrots. 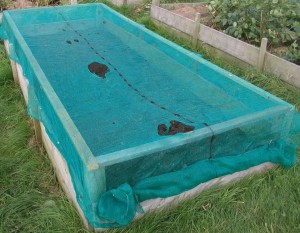 I then sowed some Eskimo which is an over-wintering carrot. I’m a bit late really, should have been done in July but I think I’ll get away with it. We usually get late winters here and I’ve covered the bed with some windbreak netting. It will make a small difference to the temperature in the bed, raising it by a degree or two.

One of the things that makes growing here difficult is the wind. It’s not just that it literally blew sweetcorn out of the ground but the wind chill effects plants just as much as people. A 15mph wind reduces a measured air temperature of 10 deg. C down to between 2 and 7 depending on how you calculate it (there are various methods). The windbreak shelter reduces the wind speed by half and the windchill is just a degree or two.

Another benefit of netting the bed is that it keeps my cats off. They look upon a raised bed full of fluffy soil as a large public loo. I love them to bits and they do keep the rodent population down but I could do without them toileting in the carrots.

Talking of raised beds, I know the theory is that because you don’t walk on them the soil doesn’t get compacted and cultivation is enough to keep the soil aerated but in practice it does benefit from forking over at least.

I’m used to getting emails telling me I’m terrible because I’m not 100% organic along with emails saying I should stick with science and organic growing is a fad but I didn’t expect quite a rude email telling me off for not loving no-dig growing and raised beds above outdated methods.

The facts of the matter are that of you have a plot of lovely, deep topsoil then I think raised bed growing is just expensive landscaping and fashion following and gains nothing in terms of average yield. Break up the plot into manageable patches by all means, I used to use degradable paths made from wood chippings for that. Psychologically far easier to cope with a patch at a time rather than weeding a full plot.

However there are circumstances where raised beds make a lot of sense. Our situation here where the topsoil is thin and stony is one example and raised beds can be useful where ground is subject to water-logging and drainage is difficult.

With no-dig systems I think some growers use it as an excuse to avoid an unwelcome task although, done properly, it’s not labour free since the mulching compost has to be made and carted on to the land.

If I had a light soil with a reasonable worm population, then I’d certainly try the no-dig method and probably dig over every five years or so to deepen the topsoil and prevent a fertility crash. With clay soils and soils deficient in worms though, my practice is to dig over. Preferably double dig and incorporate loads of manure and compost to deepen the fertile topsoil.

It’s all about using the best method for your circumstances. Sadly I’ve yet to find any way of growing without actually putting some effort in and improving the soil is a long term project. I reckon that it will take me ten years to get the quality and depth of soil that I want here. Unless I win the lottery and arrange for tons of compost and topsoil to be delivered. Hey, we can all dream!