The weather continues cool for the time of year and cloudy but we are getting the odd sunny afternoon and evening which reminds me how lucky we are to live where we do now.

On Thursday I went off to Bangor to visit Ian Sturrock at his Welsh Fruit Tree Nursery. Ian spends his time searching out lost varieties of apples and other fruits which he then propagates at his small nursery, tucked at the end of a winding lane and almost hidden within the trees.

Apples are obviously his passion and there’s not much he doesn’t know about them. He runs apple days at various venues and courses in grafting and has appeared on a number of TV programs as well as making videos which are available on YouTube. It’s a mystery to me how he gets the time to fit everything in!

We’ve decided to plant a small orchard and run the hens under. Hens like shade, not just to shelter from rain or hot sun but also it makes them feel safe. Under open skies they feel vulnerable to eagles swooping down. However, they’re not really bright and don’t know we’ve not got any eagles here.

I’m well aware we are planting something here which is most likely to outlive us so it makes sense to do some research and planning beforehand. Many of the well known and popular varieties do well in the sunny south of England and the garden county of Kent. Often they’re imported from even easier climates like Italy.

I’m not an organic grower but I don’t use systemic pesticides and have no desire to eat fruit and veg with added chemistry. Neither is our location ideal for fruit trees. We’re 700 feet high, have a very wet and windy climate and our soil is poor, stony and thin. However, there are varieties that have been bred locally and are adapted to our sort of conditions and climate. Ideal for organic and minimum input growers like me.

Because of this adaptation, these local varieties tend to be far more disease resistant and productive.

The small island of Bardsey lies off the the Llyn Peninsular in the windswept Irish sea. It used to house an abbey and, as was usual for monasteries, they grew their own fruit and vegetables. The Bardsey Island Apple is a cultivar that survived from those days and if any variety will cope with our wind and wet, it’s the Bardsey which Ian has in his range.

Even if we could grow the same fruits they grow in the gentle, sunny south we wouldn’t. Just as I don’t grow commercial varieties of vegetables, preferring to grow varieties that have flavour and aren’t bred primarily for uniformity of appearance, ease of transportation and storage life.

Basically with apples we want some cookers, eaters and cider apples. Some pears would be a bonus and we definitely want some plums and damsons. I think apricots and peaches are a little too ambitious unless we provide a sheltered glass house.

Although we have a commercial vineyard nearby at Talysarn (Pant Du) they’re actually a few hundred feet lower than us and grapes may purely be a greenhouse crop for us. Incidentally, Ian supplied the apple trees for Pant Du which they produce a lovely cider and apple juice from. Their red wine is excellent this year, fruity with a little fizz on the tongue. Perhaps a little light for beef but perfect for lamb and great for a glass on a summer afternoon. I really ought to ramble on about blackcurrants and nose but I couldn’t keep a straight face! 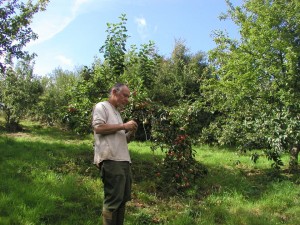 Ian Sturrock tasting one of his apples

Ian rates his apples by their taste rather than just appearance along with the qualities of the tree such as disease resistance. His personal orchard is on a steep bank with just a thin soil covering the rocks.

By growing for himself over a long period he’s better able to judge how a variety is going to perform for others in the wet and sometimes harsh climate of Wales. 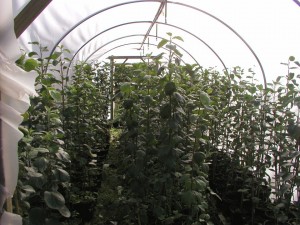 Like myself, Ian isn’t 100% organic although his trees are, being disease resistant, ideal for organic grower. 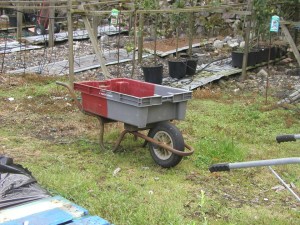 It’s obvious touring the nursery that there is a philosophy of not wasting and seeking alternative, more ecological solutions. Ian also mentioned some guerilla gardening, planting native apples on roadsides.

He uses a wheelbarrow to move trees around but when the body rusted through, rather than buying a new barrow he improvised a repair using an old fish container. Apparently it’s actually more efficient than the original! 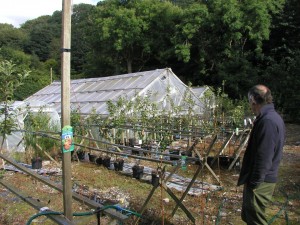 The afternoon was moving into the cooler evening as I left for home. Ian was contemplating his nursery and his next jobs.

Ian sells his trees via local garden centres, direct from his nursery in Bangor and online. Visit: www.iansturrockandsons.co.uk for more information on apples and other fruits ideal for Wales