Friday didn’t see much improvement in the weather but it did brighten up in the afternoon so I headed out to do what I could. First of all was the greenhouse, which is bursting. I’ve said it before and I’ll say it again: whatever the size of your greenhouse, no matter how big, come high summer you’ll want a bigger one.

All the tomatoes except the bush plum Roma are laden with fruits although ripening is a bit slow. If need be, later in the season I’ll pop a couple of ripe bananas in there under the plants to hasten the process. Bananas give off ethylene gas which is a trigger for tomato ripening.

As I pottered about, watering as needed and ripping off side-shoots as I went I had a bit of a shock. Suddenly my vision was obscured by an enormous, huge, gigantic spider. About the size of the one in the photo. Did I mention I’m phobic about spiders? Rather face an angry Rottweiler than a spider.

I instinctively batted it away from my face, knocking my specs off in the process which went to the floor. They didn’t break but I’ve now got a scratch on the lens. A spider about the size of a 5p scuttled away from the glasses. 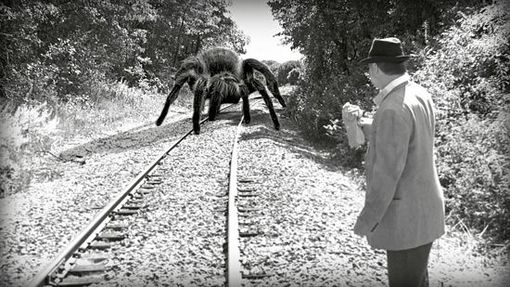 Sprays may not be effective in controlling large spiders!

Outside I decided to use the strimmer on some rough grass before mowing to uncover any stones lurking ready to damage the lawnmower. I was getting on well when Ian Sturrock and his son of Welsh Apple Trees arrived. I gave him a bit of a tour and he suggested I use the walled garden for some cordon or espalier apples, ripping out the existing canker ridden, non-productive trees in there.

He’s a bit dubious about productivity and growth rates of trees planted in the open field where the wind does whistle around. He reckons we’re pushing the envelope for growing apples here being as high up as we are but worth giving it a try.

Another suggestion he made was that I graft some pear branches to the existing hawthorns. Apparently that works for for quince and medlar as well as pears. Hawthorn is as tough as old boots, so the pear branch just draws it nutrients from the established and vigorous rootstock.

After they’d gone I returned to strimming only find that the line feed mechanism had jammed. Normally you just bang it down and it feeds out more line but not now. So back into the shed where I took the line holder off and removed some grass that was tightly wound around the shaft.

Back outside to test it but it refused to start which I assume is due to it being flooded or something because it was upside down whilst I cleared the jam. Petrol powered equipment is useful but it seems to take longer fiddling about with the engines than actually doing the job. Anyway, put the strimmer back and I’ll see how it goes another day.

Saturday was supposed to be overcast but dry here according to the BBC but in reality it was alternating between rain and drizzle. So, when sister-in-law said they were in Criccieth (a seaside resort about 20 minutes from us) and it was sunny there we headed for the beach. As we drove downhill the rain stopped, the clouds cleared and the temperature rose. I’m beginning to wonder if we did right moving here but we are where we are. And an afternoon on the beach raised our spirits.