Well it’s been one of those weeks for me, great plans which went to pot as it went along. The weatherman promised a week of sunshine and we got about a day and a half. 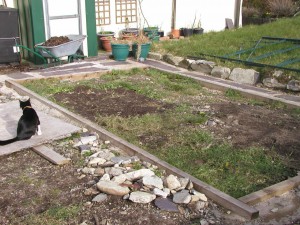 Base for the replacement greenhouse

As you might recall our greenhouse was destroyed in the storms last year. I thought it was in a relatively sheltered spot, but obviously not as sheltered as I hoped. So the new greenhouse is to go on the other side of the house.

A new base was put down last summer but we just didn’t get chance to get the house up before winter arrived and so the replacement has sat patiently waiting in its box. So  when the weatherman promised a good week decided this was the job.

With the help of my son-in-law the sides were assembled in an afternoon and we thought we’d get them up, connected and the roof on the next day. So what happened? Next day arrived and the promised sunshine was nowhere to be seen. Just fog and the damp sucking the heat from your bones.

Thought it might clear, it’s bound to burn off. Ha – no chance. Perhaps the next day? You guessed it, yet more fog. So, as it stands today we’ve got the sides assembled and we’re waiting on a decent day to get on with things. 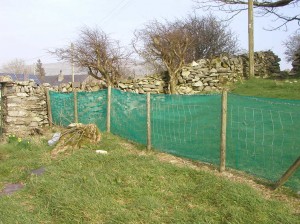 We did get one job done, but it raised another. Around where the new vegetable garden is going we’ve got a stone wall to two sides and fencing to the other two. My cunning plan is fix wind break netting to the fence sides which should make it fairly sheltered in there.

Now the purpose of wind break netting isn’t to stop the wind, it’s to reduce the force and slow it down. In some ways that should be better than the solid wall which can cause eddies on the sheltered side. But it does absorb about half the force of the wind.

It was a relatively straightforward job, tacking the netting to the posts using fence staples. Only thing was that some of the fence posts have seen better days and I’m worried the next storm will just bring the whole fence down. So we’ve bought some extra fence posts as reinforcement to the existing.

Banging in fence posts in this rocky soil is not as easy a job as we’d like. I just hope they’ll do the job. The good news is the posts were cheaper than I thought – £2.30 a piece for 3″ posts. 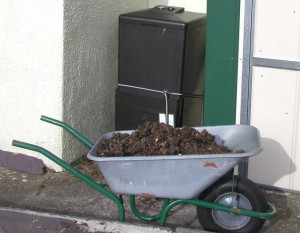 Compost in the wheelbarrow, hotbin composter behind

I’ve a row of blackcurrant bushes near to where the greenhouse is going to be and since they’re showing bud now I thought it would be a good idea to feed them and mulch.

First of all I had to hoe off the weeds, which would be easier if we didn’t have such stony ground. Then a handful of chicken pellets and a trowel of wood ashes per bush followed by a good inch of compost.

Last year I acquired a hotbin composter which is really good. It helps the process by insulating and controlled airflow so the compost heats up well and rots quickly. It’s rodent proof and works so well that it will rot down small bones and bits of meat in plate scrapings. Usually not a good idea to add bits of meat and bone to your compost because of smell, flies and rat problems.

The only tricky thing with the composter is keeping the balance of brown and green right and avoiding it being too wet. I’ve a lot of shredded bark and sawdust which soaks up the moisture nicely. The quality is excellent with the only ‘fault’ as such being that egg shells take an age to go.