When we moved from gentle Cheshire to rugged Snowdonia, I knew we’d find the weather a bit challenging. For a start, we’re 600 feet high up a hill so it’s a little cooler than down at sea level. It actually makes about two degrees difference and whilst that might not sound like much, it’s the equivalent of moving a few hundred miles north. 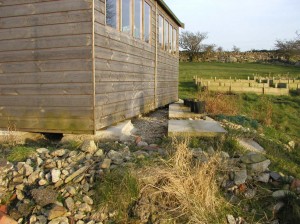 Garden Shed Moved in the Winds

Being just a few miles from the coast, the sea has its moderating effect on the weather and we often escape a frost that hits those inland, although the deep freeze winter of 2010/2011 caught us as badly as anyone with temperatures falling to minus 15.

We expected more rain, being in the wettest area of the country, but what we didn’t expect was the wettest summer since Adam was a lad and the wettest winter since the big bang. Luckily, being that 600 feet up, we’re not under water but it hardly makes growing easy.

The thing that’s caught us out though is the wind. There were two things I promised myself when we moved; a good greenhouse and a good shed. The greenhouse, you may recall, went onto a purpose made base in the lee of the old cowshed. So the wind hit it from an unusual direction and turned it into some sort of modern art sculpture of twisted metal and broken glass.

In fairness to the greenhouse, it was the way I fixed it to the ground that failed rather than the house itself although the wind was stronger than it was designed to resist. The replacement is going in a yet more sheltered spot and will certainly be better fixed to the ground so with luck it will last.

On the subject of greenhouses, I had some sad news from the old allotment site. I left my old greenhouses behind and gave the big one to Gianni from the neighbouring plot who had helped me build it. Apparently he’d not fixed it down well enough and the last lot of storms destroyed it. I know it’s silly to feel sad about a greenhouse, but I’d had some happy hours in there along with some great crops.

Anyway, that leaves my shed. Once again, it’s on a purpose-made, level base. Slabs raised slightly with space in-between to allow airflow under the shed, stopping it from rotting. It has additional bracing to make it more robust in the wind as well, diagonal metal strips holding things square.

The worst that has happened until recently is that the wind ripped the roofing felt, tearing some off. That was fairly cheap and easy to mend, a tin of the sticky black stuff, some patches of new felt and a load more galvanised nails.

The shed is 16 feet by 8 feet and has a solid floor and roof, made from tongue and groove. I don’t know what it weighs but it certainly isn’t light weight. Inside I’ve built benching and shelving and whilst the plastic pots don’t weigh much, there is a fair weight in the shelves themselves plus I’ve various bags of fertiliser and composts. At least another half a tonne in weight.

So, up to the shed where things were in some disarray. Stuff off the shelves and so forth. Now I’m not the tidiest, but this was bad even for me. It’s not until I go back outside I realise that the whole shed has shifted a good three feet! It’s basically off its base now.

Since we’ve some fine days predicted next week, I’ll have to empty the shed and see if it can be pushed back into place with the help of a few friends. Then fix it in place somehow, although quite how I’m not sure yet.