Well I went from the dizzy heights of the NVS show at Harrogate back to reality with a bump. Because of work and weather, I’ve ignored the plots badly for a few weeks and they show it. When I got down on Saturday, I said to Larry I didn’t know where to start. I was a bit surprised how quiet the site was generally. You’d have thought that a decent weekend would fill the site, but it was near empty. Sunday was, if anything, quieter.

One thing I was told in a kind email was that I should hide my failures as it could put people off buying my book. I take the point but there is no gardener who wins with everything every year. We all have losses, bad weather, pests, demands on our time. I’m no different and I think telling the truth and admitting my mistakes helps more growers than pretending to be some perfect grower.

It must be nice to have under-gardeners who ensure the plot looks perfect before the TV crew arrives for a shoot. I’ve got weeds. Lots of them.

One good thing, when I first took on the plots, the soil was tough. It was either concrete or sticky, muddy clay and weeding was hard. The hoe would hardly go through the top and that was with a lot of effort. Now it glides along, just under the surface and the pressure is used to cut weed stems rather than push clay.

Well plot 5 looked the worst by far, so start there. The Sarpo had gone down, foliage looking blighted, which is unusual for them to say the least. Strangely, the travellers that have grown in the compost heaps on plot 29 look fine!

Cut the haulm off the Sarpo, four rows so it took a little while, and then to the weeds at the top of the plot. The pumpkins were almost swamped and they’d gone over. The leaves were mainly yellow or dead so took up the three Jack O’Lanterns and put them onto the table in the hope some sunshine will harden and colour them up.

Next it was time to hoe. Sharpened it up and away I went. It only took a couple of hours, but a hard couple of hours, including a few breaks. I’ve now got a large pile of potato haulm and weeds to get built into a compost heap.

Back over to plot 29 and started taking up some of the sweetcorn plants. I cut the stems into short lengths before adding to the heap. Must admit to wishing for a petrol-powered shredder. With one of those on the plot, I’d have them rotted down in days rather than months. There are no power points on the site so the only way to run my electric shredder would be to buy a generator. Despite my convincing arguments about needing a back up generator for the computers and freezers, Val is not moved.

Cleared the weeds off a raised bed and hoed down on the large bed on plot 29 and then started on the strawberry beds. Potted up about 8 runners that will fill gaps and snipping off runners not required. I still have the rest of the bed and the barrel to do, but it will wait until next time.

One chap on the site asked me about his greenhouse tomatoes. They were, like my outdoor ones, completely blighted. He’d happily been watering, spraying it everywhere and the atmosphere was pretty humid and warm. Perfect for blight. If you just water gently at the base or better still into bottles at the base of each plant keeping the border top dry and the atmosphere dry, you have a much better chance of avoiding blight.

Larry waters through bottles sunk into the border soil in his greenhouse so the surface is dry as is the atmosphere. It really seems to work for him, keeping blights and rots away. The other benefit he tells me, is that the weeds don’t grow in the border.

The weekend finished, it’s back to the grind. The weatherman says we’ll have a couple of dull days and then it will brighten up. Maybe even a late Indian summer. That would be nice.

Photo below: 3 not very orange pumpkins. 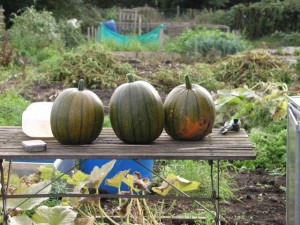 8 comments on “Weeding & Clearing the Plots”