Friday we went up to the autumn show at Harrogate in Yorkshire. The National Vegetable Society is made up from 5 area branches and this year it was the turn of the Northern Branch to host the AGM and the National Championships so it was in the Harrogate show.

If you imagine a village produce show but multiply tenfold and make the quality of the entries beyond your dreams, then you get a feel for the competition. Leeds is on the way to Harrogate from us so we picked up our daughter on the way. She was pleasantly surprised to find there were lots of food stalls and trinket stands as well as display after display of vegetables.

The small stalls were really quite interesting in themselves, although a lot of them were pretty overpriced. I suspect they have to get back a fair chunk to pay for the pitch. I did get one bargain, a new gilet for ten pounds. It’s quilted with lots of useful pockets and well made. Supposedly reduced from £16.99 but I never pay too much notice to original prices.

My daughter, Cara, bought some really impressive cut gladioli and a bonsai for Val. I can’t say bonsai do too much for me, they remind me of the model trees that used to go with train sets. Do kids still get train sets?

Anyway, back to the show. We finally worked our way to Hall 2 where the NVS had their competition. Ignoring the halls full of flowers, which I must admit were impressive but I could feel a hayfever attack coming on by just looking at them, we got to the NVS.

The West Yorkshire District Association had put an impressive stand up by the entrance. All the usual things, large leeks, perfect cauliflowers, perfect tomatoes, etc. When I look at my cauliflowers with the leaves turned to lace by those cursed caterpillars…

Then there were benches that seemed to go on for miles with yet more fantastic vegetables. When you grow your own you begin to get an idea of the effort and devotion that goes into this. Half an allotment full of potatoes grown in special compost, watered and fed carefully to produce 5 perfect specimens on a plate. All in the hope of getting that elusive red card with the word ‘First’ on it.

I met John Bebbington, who has an allotment in Willaston near to us with his wife. He wasn’t so much walking around as floating on air, having gained his first ever red card at the National’s with a cauliflower.

Being a member, I attended the prize giving ceremony and the AGM that followed. A rather impressive row of cups, shields and plaques to say the least.

I’ve taken quite a few photos, which are online at Allotment Photos September. The only thing that went wrong was John Bebbington getting his cup. I wanted to shoot it but the camera was writing to the card and went off about 3 seconds after I pressed the button, taking a great shot of the floor. John had asked me to take a shot with his camera, that has slide film in it as well. That played the same game as well so I have a horrible feeling it hasn’t come out. Could have kicked myself to say the least.

Anyway, I caught up with John in the grounds and took the shot below. I’m so happy for him, it means a lot to him. 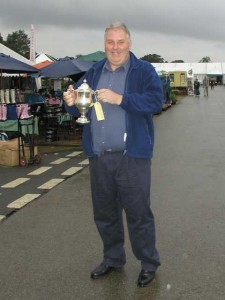 5 comments on “NVS Show at Harrogate”