I could actually make this entry a rant about computers, Microsoft and possibly evil spirits and gremlins. Shall we just say the new computer is fantastic if I only could get to grips with a different interface!

Not least was the fun of re-installing my web design software. The main program went on a dream but the add on modules I have need to go on in specific version order, which isn’t apparent from the files and it took 5 goes to get that running.

Then there’s the printer. I actually had it printing perfectly, just like the old computer but Val’s machine couldn’t see it and neither could I print out on the colour printer attached to her machine. Well, my attempts to sort that resulted in my machine not being able to print at all, no machine (including the old one) can print on the laser so things like book labels (to send out orders) are put on a document on my machine, copied over to Val’s and printed from there.

I may be heading for a breakdown!! I’ve got a chap coming in on Monday to sort it. Although I work on a PC, it doesn’t make me an expert when it goes pear shaped and 6 hours was enough of my life to spend on something he’ll probably have come across before. Each to their own.

We’ve been down to the plot a few times to water in the greenhouse and come back with carrier bags full of produce but I’ve not had much time to get anything done even when the weather has been half decent. Anyway, it’s like a swamp on there. Blight has killed all the outdoor tomatoes, which is a shame but luckily the greenhouse ones are OK. They’re so productive anyway we should be OK. Still, that’s two years running I’ve had a disaster with outdoor tomatoes so I figure next year must be a bumper crop.

The Carmen cucumber in the main greenhouse continues to do well, 2 lovely fruits of it today alone. The sweet peppers are nearly gone but the chilli peppers are producing loads. The badly treated Habenero in a pot in the small greenhouse is fruiting well but the much larger plant in the large house hasn’t any ripe fruit yet. I think sometimes you can treat plants too well so they’ve no reason to produce offspring – their fruit.

The swedes have done well, despite an attack of caterpillars reducing the leaves to skeletons. Some big ones and some small, but the size variations are no bad thing. If you only want a bit of swede then a small one, if more then a larger root. It’s a bit like proper home laid eggs. Some little and some big ones, depending on the recipe you’ve got the ideal egg.

My onions may have been a flop this year but the garlic was great and the shallots wonderful. It’s never all bad or all good news, but this weather has certainly been against us. Strangely, despite the weather, the sweetcorn has been very good. Unfortunately, we now have the European sweetcorn mountain to go with the carrot mountain.

Still, the season is far from over. Pumpkins are colouring and yet to see how the squash pan out.

We’ve taken some more time in the food processing factory we call a kitchen. Corn blanched and stripped from the cob for the freezer, yet more beans frozen and so forth plus Val made some Rhubarb and Ginger jam and Rhubarb and Orange jam. Superb! She’s also made some mango chutney, having picked up some bargain reduced mangoes. It will take a while for the flavour to develop but first indications are a winner.

Whilst we’re on a culinary roll, we had a stew for dinner. Now we like to use less meat than most people so we add beans, which are meaty in texture and full of protein. This time we added some borlotti beans and they were absolutely gorgeous.

I did take some time out on Tuesday for the National Vegetable Society local meeting. We had a slide show and talk from John Bebbington, a local show grower. He grows on a local allotment and produces wonderful crops of large onions, fantastic potatoes and brassicas. He’s hoping to do well with a large onion for the National Vegetable Society championships on Friday at Harrogate. We wished him luck. 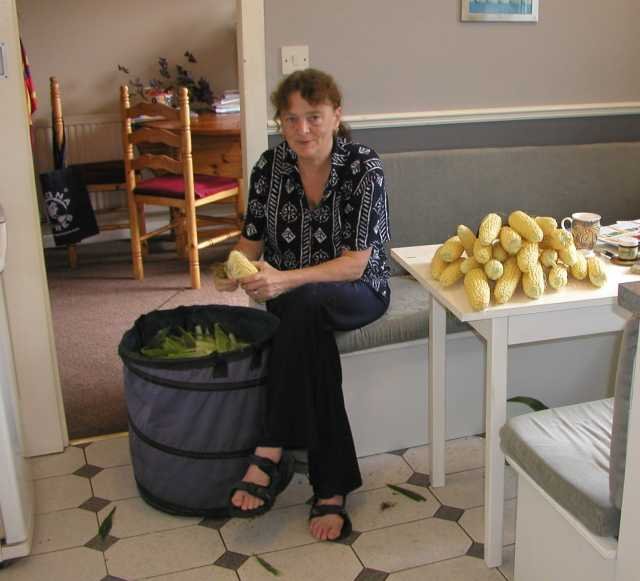