The last couple of days have been a little difficult for me from a work point of view. My internet connection decided to play up and was off and on. So many emails between me and what my ISP laughing call customer support. The theory of most customer support in IT seems to be to ask the customer to jump through so many hoops that they’ll get tired and go away.

It seems logical to me that, if nothing has changed at my end, the problem lies at their end but, no, apparently I need to replace this, change that and re-install the software that’s run perfectly for years. Eventually it’s sorted by reducing my speed to 1mb, so I now get about 12.5% of the advertised 8mb. In the small print it states something like that 8mb customers are unlike to ever get more than 7mb.

Perhaps the customers should respond that for every nominal pound they charge they will receive 90p. Seems fair to me.

Just to add to the fun, during one of the uptimes I downloaded the emails and as soon as they were down and deleted from the server I managed to knock the power cable from the back of the computer. Sudden power loss is never good for PCs and this was no exception. Jumbled up the email system losing the newly downloaded mails and making everything that was already in the inbox appear to contain no content. Arghh! It also corrupted a start-up file so that took an hour of fiddling about to actually get the machine running normally.

Apart from popping down to water the greenhouse, I’ve not got much done on the plot until today. The sun was shining and it was too good a day to waste on the small screen. The compost chap, Steve Bloor, was coming and by the late afternoon the site looked like the victim of ‘Attack of the Giant Mole’

Great piles of compost along all the paths including mine. I looked at my compost mountain and I’m sure it’s twice as large as the last time I had some. Or perhaps my memory is playing tricks. This time I’m not intending to try and move it all in one go, I’ll spread the work and try and avoid the backache that I got last time.

Before I move it onto my plot, I thought I’d better clear the weeds from where it’s going. Dumping the compost on top of the weeds just ends up with super healthy weeds popping through. It’s actually ideal for hoeing off, the ground is dry but not baked and the sunshine ensures they dry and die off when cut. In the wet weather they just re-rooted half the time.

If you missed my February diary, I’m reprinting the relevant bit here-

Get Your Compost Here!

I had a chat with Steve Bloor who is that chap who makes and delivers the compost, which was really interesting.

I think I’ve got this right, but any errors are mine!

Local councils deliver the contents of the green waste bins to his farm, up to 160 tonnes a day! They shred this waste and stack it in long triangular rows. Imagine a long old fashioned style of tent. Natural bacteriological action causes the heap to heat up and they then turn it, mixing the contents. Repeat eight times and you have something resembling the content of a growbag or a commercial potting compost except that it contains lots of twigs and bits of wood.

The next stage of the operation is to sieve the compost through a 20mm mesh twice to remove these bits and what you are left with is very similar but a little coarser than bagged compost you might buy from the garden centre. Incidentally, it’s about a tenth of the price of buying bags of compost buying in this bulk.

The twigs etc removed by the sieving process are shredded again and he mixes them with straw for bedding cattle. I really liked the integration of this. A really green business.

I asked him if they had analysed the compost and he said they had. Basically the NPK value is about 80% of that of rotted farmyard manure but the nitrogen wasn’t readily available. Still, even as just a soil conditioner it is fantastic stuff.

The bulk of the cost is, of course, in the delivery charge, which will vary according to how far you are from Steve’s farm. If you live a reasonable distance from Crewe, Cheshire and are interested in bulk purchasing compost you can contact Steve Bloor on 01270 526210 or mobile 07759 145967 or by email to stevebloor@uwclub.ne

Val struck a bargain offer in Mr Sainsbury’s shop, organic grapefruit reduced to a few pence per grapefruit. She’s busy converting these into marmalade and my job was to slice slivers of peel off and keep out of the way. It’s surprising how a small amount of brandy or armagnac lifts the flavour. I expect she’ll be posting the recipe soon.

I was contacted by the BBC about the slug plague they’ve caught on to. Unfortunately I didn’t get to speak to them, telephone ping pong but I heard an interview with Hugh Fearnley-Whittingstall on Radio 4. According to HFW the way to deal with the masses of slugs is to hunt them at night with a torch and feed them to your chickens or cut them in half with scissors.

I was a bit surprised he never mentioned nematodes since they are an effective control and environmentally sound. No mention of slug pellets, either. You can get the ferramol based pellets that are perfectly safe for wildlife and the metaldehyde pellets aren’t dangerous to pets and wildlife if used correctly.

With slug pellets a light scattering is far more effective than piles of them. Most people use them too heavily and this is actually counter-productive.

Photo Below: Compost Delivery – More photos in the allotment photographs 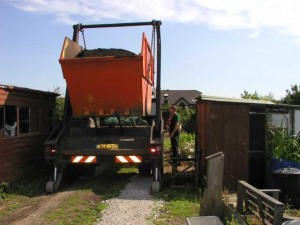