As I write this it’s about 7 o’clock and so dull we’ve got the lights on.  Considering it’s mid-August, a time when we should be sitting on the patio with a drink waiting for the day to cool, it’s not very good is it?

I did a little tidying up on the plot but not much, mainly keeping the greenhouse watered. Despite the blight in the tomatoes we’ve had quite a crop. What a shame that none of the San Marzano plum tomatoes came through. I’ll stick with plum Roma next year.

Had a few more sweetcorn as well, and some calabrese.  That was absolutely lovely with our dinner. The  excess was blanched and frozen. We’ve both been busy in the kitchen, me pottering around with pans of boiling water and cooling water for the blanching and Val making conserves and jams.

I used to use a large maslin pan to blanch in but I’ve found that a slightly smaller large casserole pan does the job better because, although it has less volume, it has a lid which helps it  get back on the boil faster.  Just a tip, pans hold a lot more heat for less energy if you use a lid.

I’ve been wondering what to do about the bottom end of plot 5. The picture below shows how soggy it is down there. The comfrey is further down and doing OK but this part of the plot just isn’t doing well. It has to be bad to drown runner beans.

I’ve thought about running a trench through but it will be a job and a half. Because of the comfrey and horesradish, I think I’d have to run some sort of pipe under the path.

The other option to make this part of the plot productive would be deep beds. I  have this horrible feeling that I could trench, pipe and put deep beds in only to see next year being a drought year. Fun, isn’t it?

Back on the web site, I’ve started checking and updating the seed section. Some of the prices are wrong, some things discontinued by the merchants and some things have been added. I didn’t think it would be more than a few hours work but having realised there are over a 1.000 items, it may be a bit more than that! 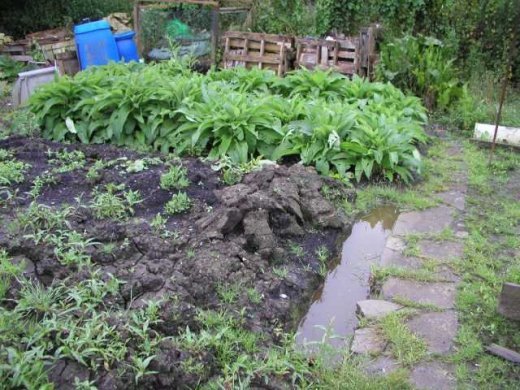 2 comments on “Planning Ahead”

Leave a Comment Here on Planning Ahead Cancel reply