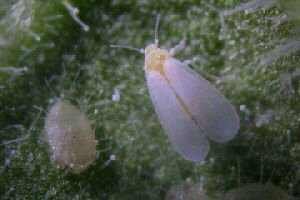 Description and Life Cycle of Whitefly

These eggs are initially white but darken to an almost black colour before hatching into a nymph, which will crawl around the leaf surface before settling to feed. The legs of the nymph then degenerate and the nymph becomes an immobile scale, feeding for 2 weeks before pupating.

Adults emerge 10 days later and begin feeding immediately. The development from egg to adult can be as rapid as 3 weeks at 21 degrees centigrade but will take much longer at lower temperatures.

How to Know if You Have Whitefly – The Symptoms

The presence of the various species of whitefly is indicated by large amounts of sticky honeydew and sooty moulds on the upper surfaces of leaves, and by a yellow mottling where the whitefly have fed. Whitefly can transmit several strains of plant viruses and infested plants suffer from a lack of vigour.

Of the greenhouse crops, tomatoes and cucumbers are usually most severely infested, although this pest will attack many other common glasshouse and houseplants. Also at risk are cabbages, brussel sprouts and other brassicas, rhododendrons and azaleas.

The parasitic wasp, encarsia formosa, has been used with great success to control whitefly populations since 1926. Encarsia females lay eggs directly into the immobile whitefly scales which remain white and develop normally until the encarsia pupates, turning the scale black.

Although it is technically a wasp, it is very small and will not sting you.

The adult encarsia will emerge around 10 days later. The presence of encarsia formosa is indicated by the black parasitised whitefly scales alongside the un-parasitised white scales. Leaves containing black scales are introduced to the greenhouse environment, and under ideal conditions the adults, when they emerge, can lay between 12-15 eggs per day. Keeping the temperature between 18 – 21 degrees centigrade with good light intensity will result in maximum activity. As with all biological predators, it is important not to introduce an excessive number of encarsia formosa as they depend on the whitefly scales to continue their life cycle.

How to Obtain & Use Encarsia Formosa

They are supplied as pupae on cards which are simply hung in a shady position throughout the crop. Encarsia will be most effective when temperatures are at least 18 degrees C during the day and 14 degrees C at night. Each application is supplied on 25 hanging cards with between 60 pupae on each card – a total of 1,500 pupae.

NOTE; the pest MUST be present before introducing this predator for control to be effective

How to Apply Your Whitefly Control

Open the box in the greenhouse, handling the cards by the top to prevent damaging scales in the circle.When using in tomato and cucumber crops, hang the cards in a shady position among the foliage around 1m below the top of the plant – and space the cards evenly

For pot plants, again evenly place the cards in a shady position level with the lower leaves but not in contact with the soil.

Use within 18 hours of receipt or keep outer box in cool place (between 5-10 degrees C) Never leave the box, or place cards, in direct sunlight

Available from Harrod Horticultural through the allotment shop: Whitefly Control

One comment on “Controlling Whitefly with Parasitic Wasps Encarsia Formosa”