As well as my Vitopod propagator and heated base propagator, I’ve two fairly cheap electrically heated propagators. The problem with these is that they’ve no control, either they’re switched on or off and that’s it.

Now the biggest problem with propagators isn’t that they don’t keep plants warm enough but entirely the opposite – they overheat and cook the plants. The answer, to some degree, is thermostatic control. This automatically turns them on when too cold and off when warm enough.

Having said that, on warm days and even cool but sunny days, they’ll still overheat and you have to open vents or take the cover off to keep the temperature under control. Going back to my uncontrolled propagators, the best answer would be to buy a temperature controller, similar to that used by fish or reptile tanks, with a waterproof temperature sensor that you can put into the compost. However, suitable ones seem to run from £35.00 upwards and I’m known as a mean bee. 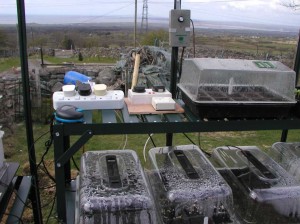 A rougher form of control is to just switch on and off based on the air temperature. A simple 240V central heating thermostat can easily so that. New these run around £7.00 to £10.00 but you may pick one up second hand for a pound or two. Mine came from our neighbour but it’s worth checking at car boots or even asking your plumber.

I had a bit of flex, plug with 3amp fuse and a double socket and surface mounting box lying in my bits box – so everything I needed to build my own thermostatic propagator controller.

Now the two uncontrolled propagators are plugged into the double socket and switch on and off according to the air temperature. Total cost to me was nothing but if I’d bought everything new it would have been about £12.00.

Having gained more propagator space, time to pot on my tomato seedlings. There’s a simple trick to maximise the results with tomatoes, plant deep. If you look at the stem just above the roots, you’ll notice little hairs. These will turn into roots if buried. The more roots, the more the plant can feed and the better the crop. Well that’s the theory and it works for me.

One great source of potash is wood ash and I spent a couple of hours burning the twiggy branches left after trimming the sycamore and removing the log sized pieces. Did the burning in a dustbin style incinerator which burns hot and produces very fine ash. Once cooled, these go into a plastic bag, stored in the shed to keep them dry. Free potash fertiliser.

Truth is that burning the wood is one of those jobs that doesn’t require much thought but still keeps you occupied. I’ve found over the years that gardening is great therapy when you’re stressed. It doesn’t matter what the problem is, doing a job that occupies you without requiring too much attention is very soothing. To be honest I think there have been times when I would have cracked up without gardening.