As you can imagine, with everything that’s happened, I’ve not spent a lot of time on the plot. It’s really touched us and been some comfort to see how generous people are – the appeal is, as I write, over £2700 and still growing. Logan Martin Appeal.

As you’ll have seen, we’ve a shiny new web site now. I should have checked things more before we went live but didn’t get chance so I’m afraid a few bugs got through. Still we’re fixing them as we go and generally it’s running well.

We may have some bugs, but the search facility is superb. The old one would often return a pile of results, everything except what you were looking for, but this one seems to give what you’re actually after.

Back on the plot

My time away from the plot doesn’t seem to have done much harm, everything has been slowed down so much with the cold, wet April. It seems like a dream now, wandering around in T shirt and shorts in March! ‘Ne’er cast a clout till May be out’ is still wise advice, I’m in sweater and jacket outside most of the time. 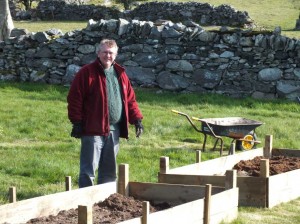 I’ve two of the deep raised beds in place now, another 4 to go. The sides are made of two 7″ planks, raising the top to 14″. However, the corner posts and side pins are higher which will allow me to add another plank in time taking them up to 21″

On one of the old allotment plots I added so much compost etc. that the soil level was a good foot higher after 8 years. So I expect I’ll need that extra plank in about five years! I’m experimenting a bit with the beds. Normally I would dig down under the bed to increase the depth of soil but here it’s so stony under the grass it’s a nightmare job.

So, on the first bed I’ve laid cardboard over the grass and then added rotted horse manure, loam from piled turf and my own compost. A few passes with the Mantis Tiller

to mix and finally some commercial multi-purpose compost. The cardboard should stop the grass growing through and hopefully the worms will go for the manure etc. and break up the turf under the bed in time.

The second bed has more or less the same mix of ingredients but I ran the Mantis as deep as I could to break up the turf at the base. The question is whether the pasture grass will grow through or will it rot down and be broken up by worms. Only time will tell.

Because the land has a slope to it, the upslope side of the has to be put into a trench. I’m using a lawn edger to cut a slit in the turf on either side and then my mattock to dig it out. It’s not a lot of work. In fact, constructing and setting up each bed only takes a couple of hours. The real time is taken in filling the bed with growing medium.

Each bed is 3Mx1.2M and basically 0.3M high which takes just over a cubic metre to fill. If that doesn’t sound much, then can you explain that to my back! Despite Ibuprofen, I’ve flashing pain right the way down to my heel.