It’s been a busy old week for us so far. We had the annual general meeting of the Crewe & Nantwich District Association of the National Vegetable Society (now that’s a mouthful) on Tuesday evening so in the afternoon Larry and I puzzled out the accounts. I loathe accounts and forms so Larry was treated to my moaning and hysterics. We also had to renew the insurance for the society. Is it too much to ask for them to assemble the information on one piece of paper?

The meeting was terrible to start with. We re-elected officers and despite my begging they insisted on re-electing me secretary for yet another year. Minutes of meetings are nearly as bad as forms.

It really improved after that, everyone had brought along something for the buffet and Susi Mitchell had baked a beautiful Christmas cake for the raffle. That was won by Gianni from plot 28, lucky chap! He deserves a break, his motorbike was stolen from his back garden recently and ended up as a bonfire in the park. His insurance company have offered him half what he paid a year ago for it, before he tidied it up into the perfect machine. Gianni is a natural engineer and his work has really been rewarded, not.

The buffet was brilliant, more than enough for everyone. We even had a couple of lovely pork pies that were over for the next day.

It was interesting to see that the price in France for butter has risen just as ours has over here, I suppose it’s what happens in a single market. Stranger still, the price for Bell’s whiskey is dearer than Morrisons price in the UK.

One thing we picked up that might be helpful if you’re planning a ‘booze cruise’ is that the supermarkets offer a very good exchange rate for British cash. We’ve always paid by credit card but next year we’ll take notes. 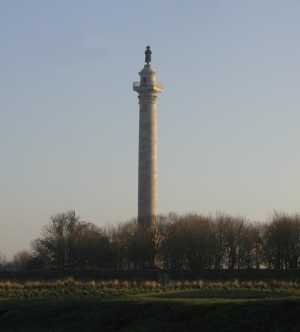 Why they should offer such a good rate for cash, I don’t know but I’m sure Monsieur Le Tesco has sound reasons. The picture on the right is from the car park at Intermarche in Boulogne. Quite impressive, Bony, but not  quite good enough!

The drive back was not a lot of fun. That there London with its M25 is a nightmare. Stop start for miles, Val’s asleep and I’m reduced to pinching myself to keep alert until we finally reached some services where a cup of coffee re-awakened us. At the price they charge for a coffee, roughly similar to the GNP of a small country, they ought to provide a driver!

Talking of charges, we had a meal on the boat as we came back. We rarely eat out and now I remember why. Broccoli and cauliflower were under-cooked, not so much al-dente as raw and the sprouts were soggy balls. I suppose it’s the punishment for growing and cooking our own, we’re fussy about what we get served.

As well as the usual stuff you get on a booze cruise, we picked up some Le Parfait storage jars cheap and some spare sealing rings. You can buy them online (allotment shopping cookware) but I suppose they have to cover postage and breakage which does bump the price up.

All the French supermarkets seem to stock a range of storage jars and preserving equipment. I think the traditional skills are alive and well over there even though the microwave ready meal culture is creeping in.

I was a little disappointed when we went into Leroy Merlin. That’s a French DIY chain, a bit like B&Q but they stock loads of gardening equipment, seeds and rotovators. Unfortunately they’ve re-done their Calais store, it’s gone all posh and upmarket. The gardening stuff is squeezed down to make room for Christmas lights so there was not much to see. We did have a bit of spare time so I thought about popping into a garden centre but we missed the junction on the motorway and it had gone a bit foggy so thought it best to carry on for the boat. Yet again I missed out on taking a photo of the French allotments that are beside the A16 motorway, this time because you couldn’t see much to the side due to the fog.

Well, it’s back to reality and 130 emails in the inbox for me. Here’s Val looking happy as we prepare to empty the wine shelves in this store. 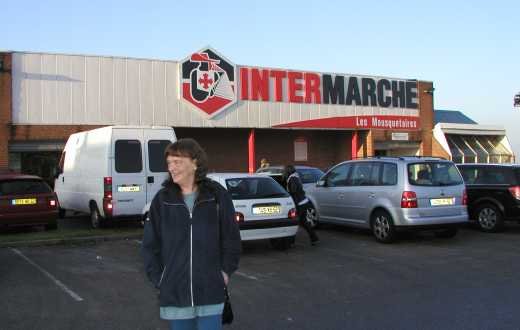