It might not be the legendary summer of ’76 but we’re getting some nice days and Thursday afternoon was superb. The clouds only served to show off the blue in the sky.

Val took the opportunity to empty out the stored potatoes onto an old shower curtain and check them over. They were a little damp so the sunshine made sure they were thoroughly dry as well.

Lucky she did as one potato was starting to rot and it would have spread to the whole sack. When you’ve gone to the trouble of growing something, you’re a bit silly not to look after it properly.

I’ve got the Mayan Gold and Lady Balfour maincrops waiting to harvest. The haulm has been cut off so the skins should be hardening (setting) as growth has stopped. The Sarpo Mira are still going strong and I doubt they’ll be coming out much before October.

I’m building a food store in the old cowshed. It’s ideal as it tends to keep cool in there and there is power so I can make sure the temperature keeps above freezing in there. If it drops to just below freezing then the root crops and onions etc. can be ruined. The water in them forms ice crystals that damage the cells so the moment the temperature rises they’re mush and vulnerable to moulds and disease. 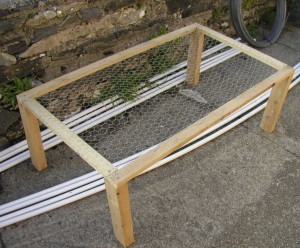 Building the food store is a wet-weather job, for this sunny day I wanted to build a drying frame for the onions. I’d a long length of 2×1 wood hanging around and a  length of 2×3 that had come out of a stud wall we took down.

I pulled out a few nails from the 3×2 and then cut it into 4 pieces, the legs of my frame. Cut the 2×1 to lengths, 2 long sides, 2 shorts. Few nails and screws fixed it all together. Then a bit of chicken wire I had hanging around was stretched over the rectangle and stapled on. Roughly one hour, including a tea break.

Incidentally, if I was buying in the wood I’d have used 2×2 for the legs. I expect you could get away with less but saving only a few pennies. Best off is to keep an eye out for skips. Always ask the owner, it’s technically theft to just take out of a skip even though they’re throwing it away and some people get really cross you’re pinching from their skip that which they are chucking away. Why? I don’t know! 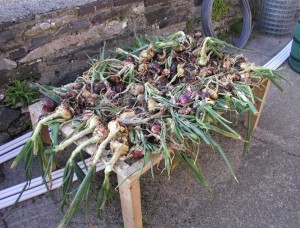 Onions Drying on the Frame

Once I asked a builder about having the scrap wood from a skip and he helped me by delivering a load of old decking and a dog run. He was happy as he saved a skip and I was over the moon with my haul.

Having built the frame, it was just a matter of lifting the onion and shallot crop and laying them on the netting. If the weather goes towards monsoon then we’ll take the frame under cover but the odd shower won’t make much difference to the drying process..

We’d still got a lot of last year’s garlic hanging in the shed. It was right on the edge, some sprouting and going soft. To avoid wasting it Val stripped it and just popped it in a jar of olive oil.

Now before any comments about the risk of botulism, yes we know and we have researched it properly, not just a search on the net finding the same story re-hashed a number of times. We consulted food scientists.

Storing garlic or peppers in cold oil does present a very small, minute, teeny-weeny risk of giving you botulism poisoning which can be fatal. Store as we recommend using a hot oil method and you are safe. Note, do as I say not as I do – and that’s my back legally covered!