Friday was a fairly decent afternoon so I cleared another potato bed. This one was completely Arran Pilot and somewhat overdue for harvesting. Well, what a result! I suppose I should have properly weighed the crop but I’m fairly good at judging weights. This bed resulted in a full sack so roughly 25Kg! About my lift limit nowadays -it used to be more, but time creeps on. 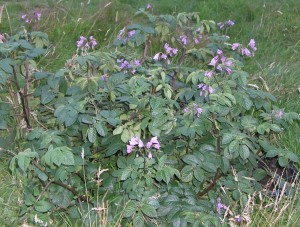 Anyway, that’s near twice optimum expected yield, which I’m rather smug about. And they’re lovely quality, a couple of splits and a handful of damaged but far less than in previous years. Next week I’ll start on the maincrops. There’s a bed of Lady Balfour and of Mayan Gold both ready to come up.

One thing I love about this gardening and growing, there’s always something new to learn. I was listening to Gardener’s Question Time and heard Bob Flowerdew discussing fruits on potatoes. 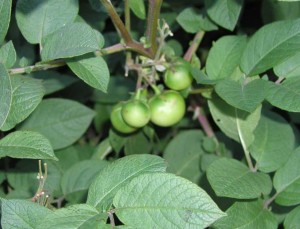 Potato Fruits – Seed Pods NB These are NOT edible

As you may know, although we plant and grow from seed potatoes, potatoes develop flowers which pollinate and then produce a small round fruit rather like a green tomato. These contain seeds and it’s from these seeds that the new potato varieties are bred. Of course, the vast majority are useless in comparison with the parent varieties which is why developing new varieties is an expensive business or a life long hobby.

Anyway, back to these ‘potato fruits’. If you didn’t know, please be aware they are not edible. They are positively poisonous in fact and will give you a very upset stomach at best.

Now our Bob had been reading that removing the flowers and thereby preventing the plants developing the seed pods results in a yield increase of 8%.

So next year, I’m afraid my oft repeated statement that flowers do have a value, as compost material, will apply to the potatoes. OK, I’m only joking about flowers, it’s been an ongoing joke in our family for 30 years but I’m serious about removing the potato flowers. After all, an extra 8% yield for nothing isn’t to be sneezed at.

Having cleared two beds, I gave each about 250 grams (I think that’s 8 oz in funny money) of fish, blood & bone general fertiliser and raked it in to the surface. That should restore the nutrient levels that the potatoes have been eating away.

Saturday was as the weatherman threatened, horrid. Rain and wind with low cloud here which made it more like a winter’s day than August. Incidentally, before I single handedly destroy the Welsh tourist industry, our weather here 600 feet up in the foothills of Snowdonia, tends to be extreme compared with the coast and sea level.

Val’s re-drafted her articles on bottling fruit and vegetables so I uploaded them to the web site. We’d not been 100% happy with the originals and a few mistakes had crept in so we took the opportunity to correct them. The series start here: Bottling (Canning for our US readers). 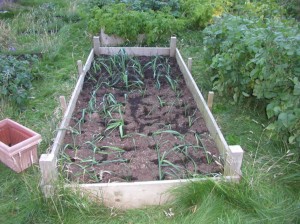 Leeks Planted Out in Raised Bed

Sunday was better, if not brilliant and sunny, so some time back outside. I’ve filled one of the beds with leeks. Over the years I’ve been refining how I grow leeks and think I’ve just about got them down pat now. I start off in modules, sowing 2 or 3 seeds and reducing to the best seedling. Once well established, I then fill a largish trough with a mixture of soil and multi-purpose commercial compost.

Remove the modules and place on the surface of the trough, filling any gaps with compost. Nicely spaced. Keep in a sheltered, sunny spot and after the first 4 weeks feed each week with a general purpose liquid fertiliser, like Phostrogen or Miracle Gro.

By the time the first early potatoes are lifted, the leeks are ready for planting out. I’ve fiddled about with various spacings over the years but I’m now settled on 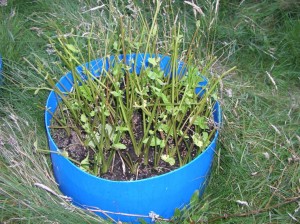 Parsnip Remains After the Sheep

20cm (8in) apart each way. Wider spacings don’t improve the yield but smaller spacings reduce the size of the leeks.

I’ve an old spade handle which acting as a dibber, makes perfect holes about 15cm (6in) deep to drop the transplants into. Never throw anything away, it’s bound to come in useful one day – usually the day after you give up on finding what it is good for and chuck it away.

As I said, I’ve added some general purpose fertiliser before planting but this trick is new to me. I take the leeks and drop them into the holes and water in as usual but the trick is to add some high-nitrogen balance liquid fertiliser to the water. Not too strong, about half the recommended strength.

The thing is that the leeks take a real check due to root damage when transplanted and the idea is to feed them directly to aid recovery and establishment. Fingers crossed, the theory makes sense at least.

It’s not been a bad year for slugs and snails really, the birds don’t seem to be much of a problem here either which may be due to the local buzzards deterring pigeons from setting up home. We’ve got rabbits around but 3 rabbit hunting cats so they’re not a problem on the plot. What can go wrong? Sheep – that’s what, sheep.

The other day I looked out and there were 10 of them in the field. It only takes one to work out a route and the rest follow along. Innocent looking crop eaters! The few carrots that were left are now  but a lump of dung and the parsnips look like they’ve been hit by locusts.

I don’t like confrontation but this is the third time this year and the farmer doesn’t seem to accept that it is up to him to control (fence) his sheep. Even a threat to put the B’s into the freezer doesn’t worry him, he knows me too well. I can see me exploding next time though.