The other day I was asked to pop along to some new local allotments. Basically an unused field in a village has been divided up into plots. Apparently S4C have been filming their development but I hadn’t seen any of the programmes. Not speaking Welsh, I can’t say it’s a channel I switch to often. 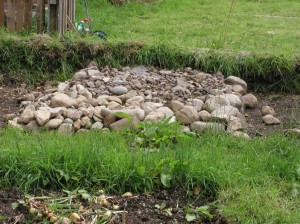 Stones removed from a couple of beds.

It does strike me they could attract much bigger audiences if they used the technology to provide English sub-titles or dubbing on a sub channel. I’m sure some of the programmes are really interesting if only I knew what they were on about.

Anyway, back to the local allotments. What the plotholder wanted was some general advice and guidance which I was happy to give, for what it’s worth. Now this wasn’t a one way street, I actually learned a valuable lesson too.

Like my soil, their soil is stony ground. I mean really stony, ranging from pebbles through lots of tennis ball sized stones to boulders that take two people to lift. I’ve discovered that an ordinary digging spade is of little value, the blade hits the stones and you can’t get a good spit deep. The answer to that problem is to use a mattock and I’ve recently got a Sneerboer pointed spade which is great for splitting new ground, slicing through turf with matted grass roots and pushing the smaller stones to the side. Even the solid, heavy stainless-steel blade won’t go through house-brick sized stones of course. 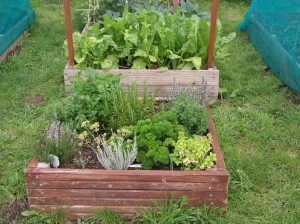 A lovely Herb Bed but that rosemary is going to grow considerably.

So, what to do? The answer is to sift the soil. Yes, it’s an awful lot of work but once an area is cleared, it’s a job done. Their novel soil sifter is to use old supermarket shopping baskets. The mesh is about the right size, allowing the smaller stones through which help the land to drain but holding back the larger stones.

From what I was told, you need to watch out for developing tennis elbow and bleeding knuckles from shaking and shaking the basket. My neighbours up the hill have the same stony soil problem but they’ve built a sieve.

It’s basically a wooden frame with wire netting stretched across, supported on legs and angled. Attached to the side is a reciprocal saw without the blade, that causes the frame to vibrate.  So, one wheelbarrow under the net collects the sieved soil and one at the end collects the large stones. All you need to do is shovel the un-sifted soil onto the frame. Seems like a winner to me, still hard work but not as hard as manually shaking the soil through.

Looking around the plots I noticed a few things people were going wrong on. So my top 3 beginners mistakes. 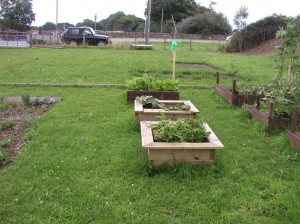 Cabbages and other brassicas, sweetcorn were the main victims of this. When you plant out a seedling even six inches apart seems a large distance yet once they leap into full growth they need a lot more. For sweetcorn and most of the cabbage family I’d go for 18″ apart.

Even if space is limited and you’ve more that you could squeeze in, don’t. Better to get 4 good cauliflowers than 8 that don’t achieve anything like their potential. Of course some varieties are suited for closer spacing than others but generally follow the advice on the seed packet and you’ll get a better crop.

A lovely Herb Bed but that rosemary is going to grow considerably.

It takes years to get soil into good heart with plenty of organic matter, major nutrients and micro-nutrients. Keep adding rotted manure and compost and you will eventually get there. In the early days at least, add a bit more food for the plants. As a rule, a handful fish, blood & bone or Growmore per square yard before planting will help no end whatever you’re growing.

An acid soil hangs onto it’s nutrients so the plants are hungry and crops poor. Adding lime and taking the soil to neutral is of as much benefit as adding fertiliser. You can buy soil test kits for a few pounds and they’re worth every penny. Adding lime releases the nutrients to the plants and particularly with brassicas has a huge effect on growth.