It’s been a busy week for us, not least because we’ve had the builders in. Where the house roof meets the wall of the old cowshed there’s a gully that channels the water to the gutter. Well it should channel the water away but the lead was cracked so the water pushed down into the wall where it oozed through making the house damp.

I’d tried to repair it with waterproof paint but it hadn’t worked so time for the professionals. Rendering was chiselled off the wall, slates removed from the roof and the old, very patched lead flashing replaced before re-rendering and slating. Not a cheap job but it had to be done. Hopefully a dryer winter this year than last indoors at least. 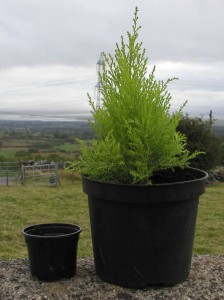 Moved from 7.5cm pot on left to 1ltr pot on right

I’ve been planting out some conifers. Initially when we moved I thought to plant just native trees but conifers being evergreen look better in winter so we’re planting a few around. Never be afraid to change plans when facts hit you on the noggin.

The cost of trees is closely related to how old they are, obviously cheaper to care for a plant for one year rather than two or even four. So we buy small plants, pot them on and eventually plant them in the ground when they’re big enough to survive all that gets thrown at them. Happily they don’t seem to appeal to the blessed sheep that seem to be our biggest (in every sense) garden pest.

Conifers tend to like a fairly acid soil so when I get them in their little 7.5cm pots, I move them into 1 litre pots with a mixture of half ericaceous and half normal multi-purpose compost to which I add about a third of normal soil (that’s quite acidic here) and a little slow release fertiliser. 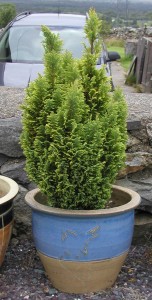 The next year I double the pot size and increase the ratio of normal soil to about half the mix. Depending how fast growing, they’ll either go to a larger pot or for their final pampered year into large tubs. In the tubs I put a layer of old turf upside down which acts as a water holding sponge.

In the summer we liquid feed the conifers about half what we’d feed the flowers in tubs, preferably with an ericaceous feed.

When planting out, I dig a hole about twice as wide as the pot and half as deep again. Break up the base of the hole with a fork and add some compost along with 500gr of bonemeal to feed it for the next few years.

Take some of the soil removed from the hole and mix with compost about 50:50 in the wheelbarrow. Remove the tree from the pot and tease the circling roots out a little. Making sure the top of the pot soil is level with the ground, back fill from the barrow adding a little slow release shrub fertiliser to the soil.

Tread down well as you fill and then give a really good watering, at least one can full if not two, to settle everything down. In dry weather, water weekly to really get them established. 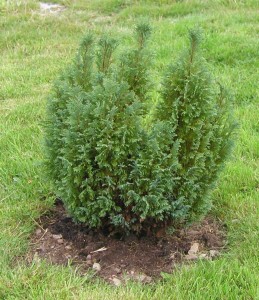 Conifer finally planted out and hopefully growing on

If you were to just grow the conifers on in compost rather than mixing some soil in, then they’d probably grow a little faster but when they go into the ‘wild’ the tree will check as the roots won’t be used to soil and have been known to just keep circling the original root ball. Sticking with the good stuff.

Given a few years, they should be getting towards 2M high and providing some winter greenery to look at. Do watch what variety you get and remember fast growing usually means a large tree. I’m trying to add some decoration, not a tall forest so I’m looking for trees with a maximum height of three metres, two is fine but not the really dwarf types.

The next project I’m thinking about is to grow a bulk amount, maybe 50, Rowan in pots. Rowans do fairly well here but we’ve had much better results with pot-grown trees about 4 years old rather than bare-rooted 2 year olds. But the 4 year old trees can easily run over £20.00.

The local trees are heavy with berries but I believe extracting the seeds from them is a fiddly job and 100 seeds can be purchased for a few pounds which would be reasonable for the time saving.