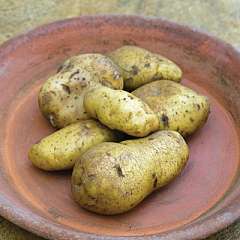 Sarpo Kifli potatoes have a truly outstanding flavour. Best planted early as it can be a slow starter, Kifli shows the usual good Sarpo resistance to drought and blight, as well as a high resistance to virus Yo.

It’s an early maincrop variety with elongated white-skinned tubers and a fabulous ‘new potato’ flavour, Kifli can be harvested over a long period – the larger and more mature tubers will still have excellent flavour.

Although blight can be controlled by pro-active application of chemical sprays, none of us relish the idea of eating chemical residue with our chips. Just salt and vinegar, thank you!

There are serious benefits to the economy as well from developing these disease resistant varieties. Farmers can escape the necessity of constant spraying to ensure a crop. I’ve heard of farmers needing to spray potatoes over 20 times in a season to save the crop from blight, which costs a lot of money. So healthier and cheaper food thanks to the breeder’s art.