Sunday was pleasant day even if we did have one of those strange showers when it’s actually raining and sunny at the same time. No wonder it’s been such a bad year for blight (again!)

As well as losing all the outdoor tomatoes on the plots to blight, the cherry tomatoes around the garden have mainly succumbed. We’ve had some tomatoes off them but nothing like we had last year. Still, it’s hardly been salad weather for the last few months here.

So headed to the plot quite late on Sunday afternoon armed with the camera. I took a few photographs for the album – allotment photographs. It’s actually quite a record now, stretching from December 2003 to now. I find it useful to compare month to month across the years and see how things have been affected by weather as well as the gradual changes I’ve made over the years.

The tomatoes are ripening fast, if late, so I gathered nearly half a carrier bag full from just 4 plants. The Incas plum tomatoes are really sweet but I’m kicking myself for not scattering a few slug pellets around the greenhouse – half the ripe ones were half eaten when I picked them up.

More courgettes, of course, and a nice cucumber went into the bag. All the bean teepees have blown over, first time I’ve had them completely flattened. I think the problem is that the soil was so dry when I erected them that I couldn’t get the poles in far enough. Now it’s wet and loosened up, they’ve come out of the ground easily with the strong winds.

I didn’t want to damage the plants so gave up on trying to re-build them and have left them leaning onto the greenhouse. Still, half a carrier of runners and the same of French beans went home in the swag bag.

Collected some of the pumpkins and squash, putting them on the table to ripen in the sun or at least harden the skin in the rain. Some of the squash are quite small, but that’s not a problem as they’re just right for the two of us. I’ve not grown any giant pumpkins for Halloween this year, so the nieces will have to make do with a normal one.

Finished the day sitting on the bench, watching the sunset behind the just yellowing trees. It was remarkably quiet, nobody else on the site and no cars going past along the road. Even the birds were hushed, except for a few rustles in the trees as the pigeons went home to roost. Probably to dream of finding a way through the netting to my cabbages! 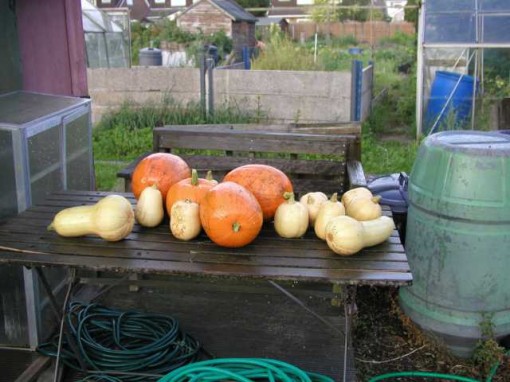