Those who have been following my diaries over the years will know we head off to France twice a year for a shopping trip. Because the drive down to the south coast takes about 5 hours, we stay overnight in a hotel and make an economical mini-break of it.

In fact, it’s more than economical, it pays us. The UK tax on booze and baccy is really counter-productive. Anyone living in the south with easy access to the channel ports would be mad not to take advantage of the savings to be had across the water.

It’s not, for us, just the money saving either. The French supermarkets have a wonderful selection of wines from smaller suppliers that you just don’t see in British shops. Some are better than others, but that’s part of the fun when you open them.

At one time we would pick up cheese over there but in recent years the UK supermarkets expanded their range and now you can often find Camembert and Brie cheaper in Britain than the same brand in France. However, the Auchan stocks a range of artisan cheeses that you’d never see in England, so they go into the basket.

It’s well worth taking a walk around a French supermarket, much is the same as we get at home of course but we found some lovely dried pasta (described as 7 eggs) and a fantastic range of tinned pates – so they go into the basket as well.

However, the real fun for me is wandering around the French DIY stores like Bricomarche and Leroy Merlin. The Leroy Merlin in Calais has a wonderful selection of sheds and wooden buildings outside. I’d reckon they’re about 20% cheaper than we’d pay over here, although a lot depends on the currency exchange rate, of course.

Inside it gets more exciting, the selection of tools and machinery is fantastic. Whole racks of petrol brushcutters and strimmers, large displays of rotovators and ride-on mowers etc.

This time I was really taken with a 6hp walk-behind two wheel tractor with attached reversible plough. It was about £1250.00, which is actually a pretty good price and would be ideal for someone with a couple of acres.

Even water butts are cheaper there. I was looking at some tall 300 litre butts for just £60.00. Compare that with what you can get over here for £60.00! After my window shopping, I ended up buying some carrot seeds. I really like a variety called Touchon which are difficult, but not impossible to find here. The French seeds come with a use-by date of 2016, so I’m quite happy to keep them in stock until I need them.

Now each time we go on our shopping jaunt, I notice the number of allotments off to the side of the motorway. Pulling over to take a photo on a busy motorway is not the most sensible thing but this time I managed to actually find a site that we could get to.

I’m not sure how you actually get into the site but there was a layby to the side of the minor road that bordered these allotments.

Now it was a drizzling as we pulled up and later on, absolutely pouring with rain. I mean real power shower from the sky rain. My French is pretty basic as well, so I don’t blame the chap carrying the board ignoring the weird Englishman standing by the fence calling to him with an umbrella, taking photographs!

This is a fairly new site, I think just a couple of years old, but fairly typical of the sites I’ve seen in the Calais area. The one thing that strikes me is the uniformity. A standard English allotment site is a jumble of different sheds and greenhouses, ranging from brand new to home made from skip saved pallets.

Here the sheds are provided as part of the plot. Each shed is actually a block of 4 separate sheds, each with a water butt fed from the guttering. There are differences between the plots according to what the individual is growing, but no greenhouses or coldframes to be seen.

So, my view of French allotments is that they’re well occupied, well used and very neat. But they lack the charm and interest of our allotments, with their recycled jumble. Perhaps one day I’ll manage to actually talk to a French plotholder! 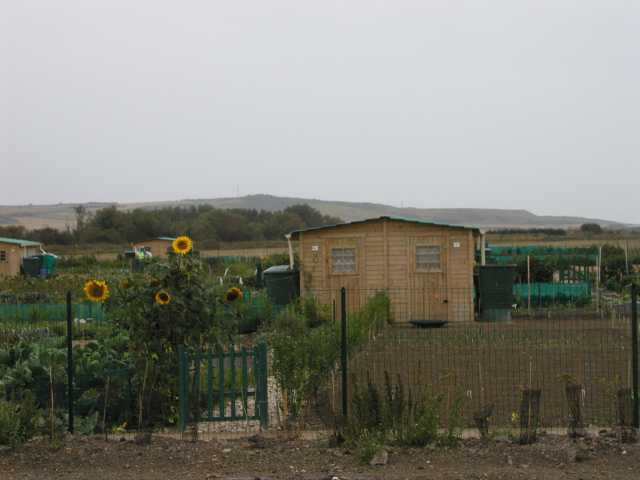 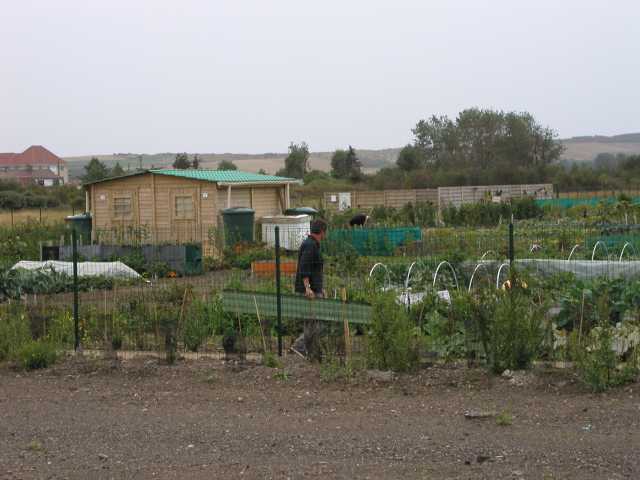 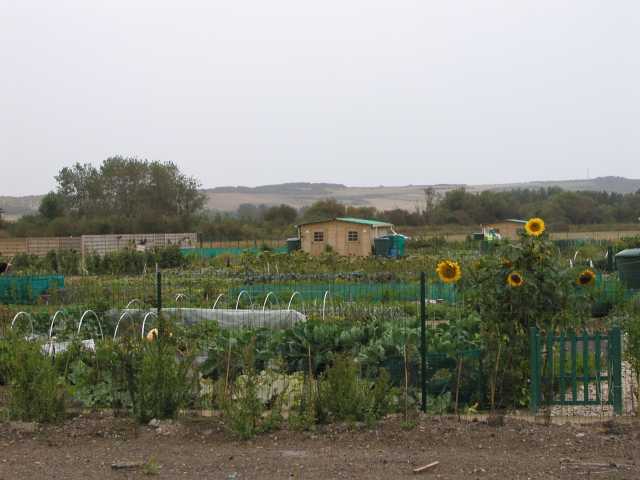