Friday was quite a fine day but I couldn’t get away to the plot until quite late on. Apart from a quick water in the greenhouses, all I did was pick some beans. One of the teepees has fallen over and I can’t get it to stay up, so that’s now leaning on a compost bin.

Anyway, a full carrier bag of French and runner beans plus a few courgettes and 3 more cucumbers came back with me. Not a bad haul really. 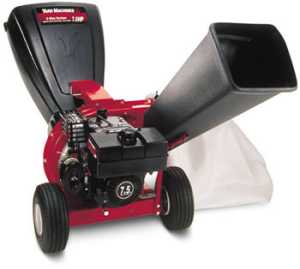 I’ve struck lucky on Ebay with a petrol shredder. I’ve an electric one at home, which isn’t much use on the allotment unless we had a generator, but with our move to a smallholding coming along, I can justify the purchase.

Now with garden machinery on Ebay you need to be a bit cautious. Often people bid up on things that you really need to be a restoration fanatic to get running properly. Collection is the other problem, you want an auction a reasonable distance away from home.

So I saw an MTD 865 8hp petrol shredder / chipper in pristine condition that was located 77 miles away from home up for sale and won it for £460.00. So off to collect it on Saturday. Bit of a painful drive, lots of ‘Sunday afternoon drivers’ and patches of heavy rain slowing the motorway to a crawl, but I got there in just under 2 hours.

It was just as described, apart from a little damage to the collection bag you could have convinced me it was brand new, just out of the box.  Even the oil on the dip-stick is clean.

It’s a heavy beast, well it’s got a 13 gauge steel housing for starters, and a pretty hefty engine. We had to take one of the feed-in hoppers off, but managed to get it in the back of the car and the neighbour helped me get it out at this end. Now it’s filling up the garage.

I’m not particularly looking at chipping large branches, they’ll be going onto the woodburner, it’s the clippings and green waste I’m looking at converting into compost. The pasture soil on the holding is OK for grass, but not much cop for vegetables. Now the best thing to improve any soil, be it sandy or clay, is organic matter, compost.

If you grow sweetcorn, then you’ll know the stalks take quite a while to rot down. Brassica stalks, especially Brussels sprouts, can take two seasons to disappear into the compost. Shredding will speed up the process from months to weeks.

When I’ve shredded hedge clippings, they’ve been heating up within hours of being placed on the heap but unshredded, they take an age. Shredding them with a little electric machine takes a while though, mainly because you’re feeding them through a safety hopper designed to stop you putting your hand in the choppers. Not to mention the machine jamming frequently.

With ‘the beast’ (I’ve named it already) there’s a wide hopper you can lay down and then rake material into. Far quicker. If it copes with 3″ branches, then some clippings aren’t going to jam it up.

Even leafmould can be made faster if you chop the leaves up. Leafmould has little nutritional value, but is a great soil structure conditioner and useful for making your own potting compost. A pal of mine has a leaf vacuum that chops them up and his leafmould pile rots down in just a few months.

The reason shredding speeds up is that rotting down is due to worms and microbial action. The smaller pieces means that there is more surface area relative to the volume to work on for our minute friends and the worms.

I know it’s quite a lot to spend but I reckon this quality machine will last us out if we look after it. Besides, I reckon growing our own vegetables saves us £1,000 a year so spreading the cost of this over 20 years it’s hardly making a dent. And do you think food prices will rise or fall in the future? I’m sure they’re going to rise.

I reckon a petrol shredder would be a great boon on an allotment as well. A bit pricey to buy individually but if the site bought one and hired it out to plot holders then people could make hot compost quickly and easily.