In October 2010 we achieved our dream of owning a small holding in North Wales when we bought Fron Dirion. We’d fallen in love with the area when we visited the Llyn peninsula on our honeymoon, a few years back now!

Working from home we’re fortunate to be able to live almost anywhere and over the years had toyed with living in France or Spain but we kept coming back to Wales. So, having paid off our mortgage and finding ourselves almost able to afford it, we finally took the plunge.

We’re situated at the head of the Llyn peninsula some 5 miles south of Caernarfon near the village of Penygroes. To the front of the house we look down the hill to sea and can see Anglesey to the north. On a good day at sunset we can see the mountains of Wicklow in Ireland on the horizon. Behind the house we’ve fields and from the back field we can see Snowdon in the distance.

We’ve got nearly 4 acres of land in total, divided up into fields with dry stone walls in varying states of repair. The fields are unimproved pasture given over to grazing for sheep. We let these at a nominal rent to a local farmer for his sheep.

There’s a small garden area next to the house along with a partially walled and gated orchard area beyond that. On the other side of the house is a field that we’ve fenced off from the sheep and this will have the veg plot, greenhouse and polytunnel. To the rear of this we’re planting trees both for their environmental benefits and as a source of firewood for years to come.

We’re also planting a mixed hedge to the side of the track to the house. We’ve initially planted some goat willows but intend to add a range of other hedging plants, some just for wildlife and some for us. A bit of permaculture.

The growing conditions are challenging, we’re 600 feet or 200 metres high for starters. This drops the temperature by 2 or 3 degrees compared with sea level. We’re very exposed as well so to describe this as a windy site would be an understatement.

There’s no shortage of water, we’re in the wettest part of the UK but it does mean problems like erosion with too much water flowing down the hillside. Nearly all our land is sloping to some degree. When there’s low cloud we’re usually in it, which is a bit like being in fog.

The soil itself is tending to the sandy but it’s very stony. Stones range from egg sized to granite boulders! In some places it’s almost impossible to dig down because of the stones. It’s very thin and lacking in organic matter. Finally, it is a very, very acid soil.

Gardening is something to look at in the long term, years rather than months. I hope you find our experiences interesting and helpful wherever and however you garden.

The plan of the holding (click for larger image) shows what we have and where it’s going. The links below are some of the diary entries about Fron Dirion. 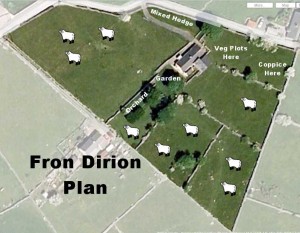