It’s been a bit of a “good news – bad news” time over last few days here. Or two steps forward, one back if you prefer. The first bit of good news is that we’ve finally got the veg plot field fenced off from the sheep.

Fencing is a job I could have tried to do myself but I don’t think I could have done as good a job of it or as economically. The chap who did the job has the right tools, for a start, and he knows how to use them. His hammer was like something you’d expect to be wielded by the Mighty Thor! A sledgehammer but the head was a large, silvery cotton-reel shape. Then he’d various bits like a ratchet strainer so the wire would be taught.

I thought he might have a post hole auger but no, just a long iron bar to lever a starter hole before banging in the posts. The difference between experience and book-learning I suppose! Anyway, it took him less time to do the job than it would have taken me to get the materials. And it’s going to last.

The bad news, now we’ve got the sheep out of the way and can finally get started, it decides to rain.. and rain.. and rain. Meanwhile, the south east of England remains much warmer and dry. Of course, there ‘dry’ is the problem. I’ve always felt that the exhortations to save water we get were more a devious way for the utility companies to save money than any real supply issue. I think I might feel differently if I lived in the south east though.

Of course I’ve not ever been in favour of wasting water (I’m too mean for that!) but spending out on new toilets to save a few litres per flush has never struck me as good use of cash. Perhaps it’s time some wiser heads than me got together and tried to come up with a plan to keep those in the dry areas wet without demanding we spend a packet to save water as the rain pours down in the wet west.

Fitting out the Shed

I haven’t wasted the time when rain has been stopping play, I’ve been out in my shed putting up shelving. I bought a couple of sheets of thin plywood and some 2×1 roofing battens. Along with some scrap wood I’ve got lying around, that’s enough to do the job in style. Total cost just under £40 which isn’t too bad. I’ll take a few snaps when it’s finished. 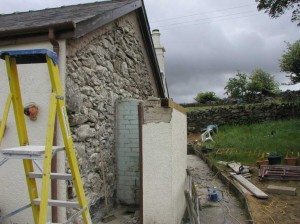 Gable End and Outside Toilet

Another good news, bad news story is our outside loo and tap. It was pretty grotty to say the least. A low roof of corrugated asbestos board and pitch black when the rotten wooden door was shut. Anyway, builders finally arrived to sort it out, which is the good news. The toilet is attached to the gable end of the house which is rendered. (For my N American friends, I think you call it stucco finish). It turns out that the render hasn’t been done properly and is coming away from the wall. Water has got in between, been trapped and is coming through to the house.

So I’m writing to the sound of electric chisel drills removing the bits of concrete left on as they prepare the wall for the new render. Apparently it’s not just plastered on in one coat but put on in a number of thin coats. What is a surprise is that the stonework underneath hasn’t been done as well as the cowshed was. Perhaps this, the oldest section of the house, was done first or perhaps the builders felt the cattle were more important than the humans! 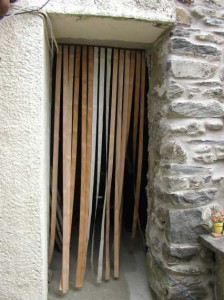 You may recall I was a bit upset at inadvertently flying into the cow shed and attempting to leave through the window. Well there was a couple of these beautiful little birds who had started building a nest in there. They were happily perching on an electric cable in between bringing bits of mud for their nest. Our cats were watching with great interest and trying to work out a way to get up to them.

Anyway, the door curtain went up and the somewhat annoyed birds have moved on. I think they may have been alright but we couldn’t stand and watch them raise a brood only for the cats to get them. The cats are back on rodent duty now.