After our visit to the pig & poultry fair on Tuesday, we decided to re-decorate the office. Now this might not sound a big deal but you’d be surprised. We use the space to the full and boy is our office full.

We’ve two main computers, a test machine, 2 printers, a scanner, back-up drives and switch. That’s just the electronics and you can imagine the number of wires running around.

Then we’ve got the book stocks, filing cabinets, book shelve, in and out trays, stationery and all the other junk an office seems to need. Around the sides there are 4 desks and they’re too big to get out of the room without taking them apart.

So decorating was like that toy you sometimes get in crackers where you move squares to get the numbers in order using the one space! I thought it would take a long day but it was Friday before we were done and back running!

Saturday I decided I deserved a break and it was fine so went off to the plot. I didn’t really do a whole lot down there, my back and shoulders were still complaining from painting an artex ceiling. All that dabbing paint into grooves at strange angles.

Cleared off the last of the raised beds on plot 5 and sowed some very late broad beans. I found the seeds when tidying the shed, they’re a variety called ‘express’ a pal had given me (self saved). I wasn’t sure how they’d germinate so decided to pre-chit them. Got about 50%, which isn’t too bad considering their age and how badly stored they had been. Sowed into the raised bed at the compost bin end of the plot and now we’ll see how they do.

My potatoes are showing now, quite a few of the early birds on the site are suffering as their potatoes have been frosted. With luck they’ll come back for them but it goes to prove my contention that people are too keen to sow at the first glimmering of spring.

My neighbours had actually planted out their courgettes and lost the lot with the frost although, amazingly, their sweetcorn is still surviving. If you’re going to try early planting and sowing, then do keep an eye on the weather forecasts. If frost threatens then horticultural fleece can usually save things.

Fleece doesn’t last forever but if you only use it when you need to and store it carefully at other times, then you will get at least five years out of it. So it’s not a huge investment.

Sunday I nipped down to the plot with my brassicas. They’ve been started in modules, thinned to one per module. They’re nearly ready to move on into 3″ square pots before planting out. I’ve got them in the greenhouse, which isn’t ideal as it gets a bit too warm in there. However, the main thing is to keep the evil air force (pigeons) from eating them.

Back at the ranch it was re-organising and potting on. The Vitopod Propagatorhad it’s second tier put on as the tomatoes were pushing the roof and the squashes, pumpkins and courgettes were moved into larger pots and put on the open benching.

My sweetcorn is OK in the 3″ pots – they’ll go out fairly soon under cloche. Ended up with 24 plants from 30 seeds, which isn’t too bad. Basically, nothing tender will be planted out without protection until June. Our last frost tends to be the end of may. 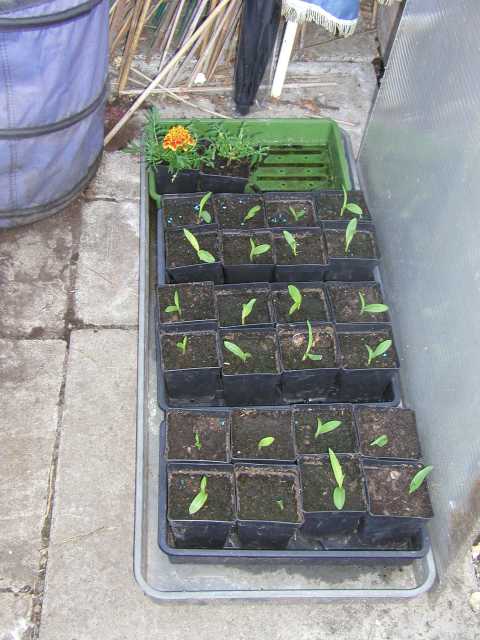 Leave a Comment Here on Avoiding the Frost Cancel reply