Another busy week on the plots, but there’s still loads to do. I think I’ve taken a bit too much on this year, mainly due to concerns about the global food situation. Remember that Russia invaded Ukraine – a world breadbasket – in February.

The increase in fertiliser prices has also effected farmers globally, reducing production. Adding in government policies that encourage taking productive farmland out of production in pursuit of a green agenda and I’m not reassured about our food security. The road to Hell being paved with good intentions, as they say.

I really hope and think my worst fears are unwarranted but regardless, we’ve seen a lot price inflation with food. We’ve also noticed a trend that started a year or so ago of range reduction. Choices are being removed as supply chains concentrate on the most popular products. That’s the first stages of shortage.

Cutting back to a smaller plot and more manageable production levels could be a mistake if things pickle. But if things change, I’ve improved land which can be quickly brought back into production if need be.

My current plan is to concentrate on the walled vegetable plot area. This will be easier than having split growing areas. There’s some flat space to the side of the polytunnel which will take some raised beds. The sloping area behind the walled vegetable plot which has some fruit trees would be ideal to grow squashes and pumpkins. Bit more thought required before I jump, especially with regards to shading. 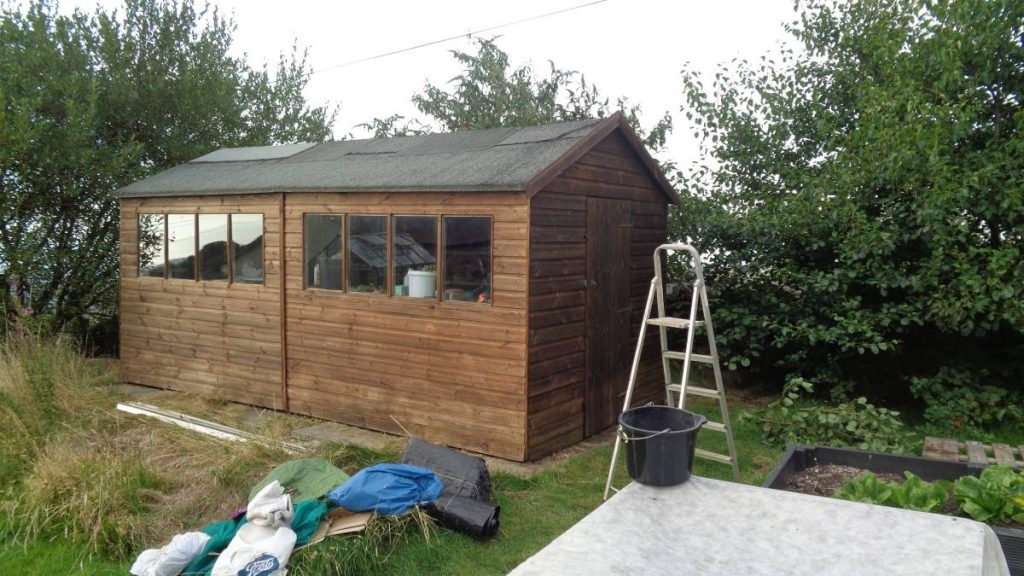 Applying second coat of Cuprinol to the big shed

It’s surprising how much Cuprinol the wood of the big shed absorbed. Usually one coat is enough but as it’s been left so long it just sucked the protector up. As long as I re-stain it annually, I should get many more years out of it. It still needs some more sorting inside but near to being ‘job done!’

The potting shed got a coat outside as well. I can’t get to the back until the blackcurrants are pruned but that side doesn’t get much sun so not so desperate.

Swedes not doing too well. I expected larger but maybe they’ll develop more yet. Doesn’t help that they’ve been attacked by cabbage white caterpillars. Swedes are, of course, a brassica but usually the butterflies prefer cabbages etc.

Harvested a bucketful of peas, some for now and some for the freezer. I’ve been meaning to harvest the last sowing of broad beans, Karmazyn, for a while. Well, I should have as the [expletive deleted] snails have been attacking and I’ve lost about a quarter of the crop to them. Got about half the beans harvested which filled a large trug with pods.

The French beans in the polytunnel seem to be slowing now, which is actually a relief! Took an afternoon for us to pod and prep the peas and beans for the freezer. It’s actually still got a couple of cubic inches of spare capacity!

Planted 10 calabrese in the mini brassica cage on the field plot. They’ve gone in because the [another expletive deleted] rabbits had all but two of the cauliflowers in there. Hopefully it’s more secure against them now. More calabrese to go in the big brassica cage.

Weeded the raised beds and realised that a butterfly must have laid eggs on one of the savoys. That’s despite it being under fleece. Picked the caterpillars off, hope the plant recovers.

Harvested the sweetcorn from the polytunnel. Pollination not good and the second cobs are generally not developed. I think the heatwaves may have affected them, pushing them to mature early. Oh well, still got enough for us even if not realising the full potential of the crop.

The greenhouses continue to be terrifically productive. Sweet and hot peppers, aubergines and enough tomatoes to open a canning factory.

Leave a Comment Here on Another Busy Week Cancel reply