I thought it might be worth noting down what I did last week, day by day. Although I didn’t feel as if a lot got done, seems it did! 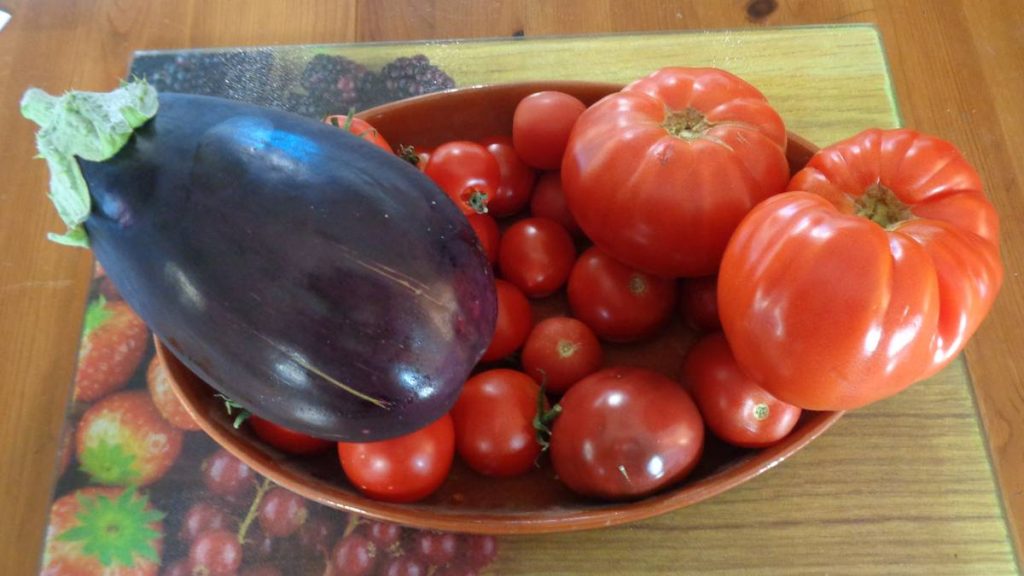 A quick pick from the greenhouse

First job was a bit of weeding, the never ending story of gardening. The worst problem weed here is chickweed. I suspect black helicopters overfly at night releasing the seeds. I may be losing it!

Emptied the Hotbin. People make a lot of fuss about what they put in their Hotbin but 90% of the time the reason mine stops heating is just that it needs emptying. Once the finished compost is emptied from the base, it reheats in short order.

Emptied the spent compost from the salad planter in the Eden greenhouse. I’d experimented with using a John Innes #3 compost in it, which didn’t work out too well. Being soil based it’s a solid, heavy compost and didn’t seem to take up water quite as well as my normal multi-purpose compost.

Replaced that growing medium with a peat-based multi-purpose compost mixed with perlite. Roughly 3 parts compost to 1 part perlite by volume. Light and the perlite helps retain water, so it should give better results.

Later, my back strongly objected to scrabbling around on the greenhouse floor and mixing the growing medium. Kept waking up all night with the back twinges. 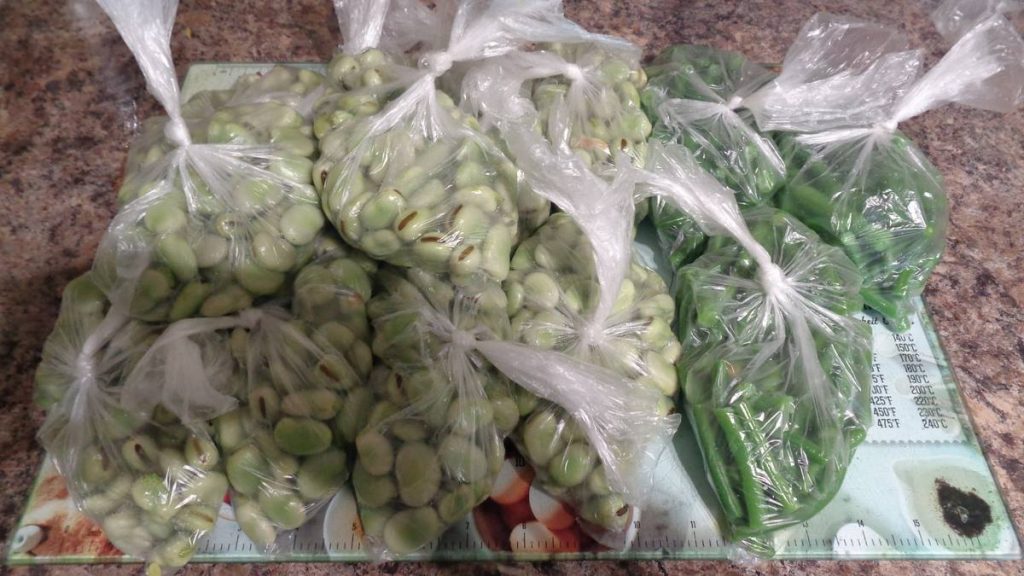 Broad and French Beans ready for the freezer in portion bags.

Horrid weather. Misty, gusting wind, drizzle most of the day. So a day for an indoor job. We podded one trug of broad beans which were then blanched and went into the freezer. Whilst I was at it, processed six portion bags of French beans.

Without a freezer we’d be drying the broad beans and salting or bottling the French beans. Have to admit it’s a lot easier nowadays than it was for our grandparents. And freezing both gives a better result than the alternatives except maybe for bottling.

Bit of a space problem so I’ve added ‘sort out freezer’ to my jobs to do list.

Tidied up the big chest freezer which gained me a little more storage space. Quite how we’ll fit all the harvest surplus in, I don’t know. Sorted through the Charlotte potatoes, most are fine and stay in the sack but about a kilo of chats for the chickens to convert to eggs. 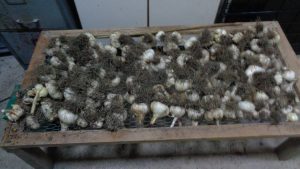 Drying Elephant Garlic in the shed

The elephant garlic isn’t drying off and some of the bulbs getting mould on them. Stripped off the outer layers, got any remaining soil off the roots and stacked them neck down on the drying rack. Set up the greenhouse heater on fan only setting to give them airflow and hopefully dry. If they don’t then we’ll look at alternative ways to preserve them. Mustn’t waste an bumper expensive crop!

Up to the polytunnel to water the hanging baskets. Of course, another picking of French beans was waiting. Filled the colander. Planted the extra beans to replace the ones that mysteriously died and replaced a couple of broken strings.

The climbing beans and the tomatoes are supported on strings which keep breaking. I tried bio-degradable string a couple of years back but that bio-degraded too quickly and was too thick to work easily with my tomato clips.

After some searching about on Ebay found a specialist rope and twine supplier. Initially I bought a 140 metre roll of UV stabilised twine with a breaking strain of 135Kg. Perfect for the beans as it’s quite thick (3.5mm) and effectively unbreakable. But.. bit too thick for the tomatoes.

So I bought 350 metres of 2mm thick twine with a breaking strain of 50Kg. That works well with the tomato clips and should be plenty strong enough. 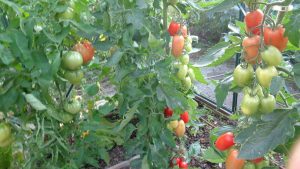 Gourmandia and Crimson Plum Tomatoes in the Vitavia Greenhouse

Was supposed to be sunny but the day started with showers. Not heavy but enough to wet the grass that is overdue for mowing. Decided to have a lazy day so not much done but it did brighten up in the afternoon.

Sideshooted the tomatoes in the Vitavia greenhouse. Fed the border crop, topped up the Quadgrows and the self-watering Growpot with Nutrigrow.

The tomatoes are doing very nicely, thank you. Tried a couple of new to me varieties this year which I’m really pleased with. Crimson Plum which is a blight resistant plum cordon variety from the breeders of Crimson Crush. Good flavour, large yield and blight resistant – although blight isn’t usually a problem with the greenhouse crops.

Gourmandia is described by T&M as “An outstanding beefsteak tomato variety which produces attractive oxheart-shaped fruits with exceptional flavour, all summer long” and they’re not exaggerating. Great sliced in a tomato salad. I think I just prefer Black Krim flavour but the Gourmandia seems more productive.

Not a productive gardening day. We did manage to blanch and freeze most of the second trug of broad beans along with a few portions of French beans.

Most of the day was spent with my son-in-law unblocking the main drain. Not a pleasant job and at one point I was ready to give in and call in an expensive professional. We persevered rodding and trying to flush the blockage despite both the bathroom and outside WCs overflowing when flushed at one point.

Grandson was initially fascinated by the open manholes but then took the sensible course of leaving us to it, commenting “It stinks of poo!” He wasn’t wrong…

A Goldilocks day – sunny but not too hot. However, it looks like another heatwave is heading our way next week. They’re predicting 27ºC for us next Friday but with our position we’ll probably only see 25ºC. No rain in the forecast and what we have had recently was more irritant than benefit.

Dwr Cymru (Welsh Water) have announce a hosepipe ban in Pembrokeshire and a small adjoining part of Carmarthenshire. Driest since 1976 being the reason. That was a vintage year <2 pages of nostalgic reminiscing about my youth deleted> Hopefully we won’t get a hosepipe ban here in North Wales but the odds are getting worse.

Watered in the Eden greenhouse. Next year I’ll use one of the old style Quadgrows in the Eden as it will be easier to top up the water. Surprised how quickly the plants are using water considering it’s not super hot.

Up to the polytunnel, more watering and yet more French beans. The cropping just doesn’t stop from them. The sweetcorn is near ready, tassels turning brown. I’ll check a cob next week.

Went into the brassica tunnel where there’s not a lot to do as the weed matting means no weeding. Despite the netting you still have to check for butterfly eggs and caterpillars. The occasional sneaky butterfly raider still gets through.

Some really nice cabbages (Mozart), sprouts looking OK but my recently planted cauliflowers and kale have gone. There’s a hole in the netting at ground level at the back of the tunnel. A rabbit has got in.

Found myself singing a version of a Cat Steven’s hit from 1967..

Mowed the patch behind the greenhouse, tidying up, folding and putting the netting from the fruit bushes away. Swept and cleared the paths up to the polytunnel. 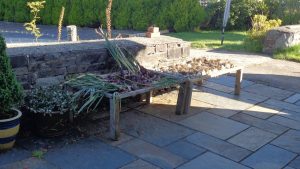 Moved the drying rack with the elephant garlic out onto the patio where I hope the sunshine and breezes will work better than the fan in the shed. Put the second rack out and pulled some red onions, which are looking good.

This current period of hot and dry weather is perfect for finishing the onions. Hopeful that they’ll keep fairly well although the humidity here works against storing onions.

Pruned the cherry tree quite severely. Maybe it will get the message and produce some fruit next year. That was as nothing compared to the destruction rained upon my bay tree. That started as a small pot plant that gradually moved up until I planted it in a decorative raised bed where it really took off.

Left alone a bay can become a big tree. My daughter has one in her garden that they need to get a tree surgeon to as it’s so big. My tree was headed the same way so whilst loppers and secateurs could still cope, went for it.

Pretty big pile of prunings which I made a start shredding. These will, once shredded, compost down quite quickly being a mix of leaves and wood giving a good carbon nitrogen ratio and being small pieces. This gives a large surface area relative to volume for the microbes to work on.

There’s a problem with my Stihl shredder. When it jams, as they all do, it has a tendency to blow the plug fuse. I’d taken it into the garden machinery repairers but they couldn’t find a fault on inspection.

Anyway, now I know what the problem is when it dies, I just replace the fuse after clearing any jamming material. Irritating, though.

Leave a Comment Here on A Week Recorded Cancel reply