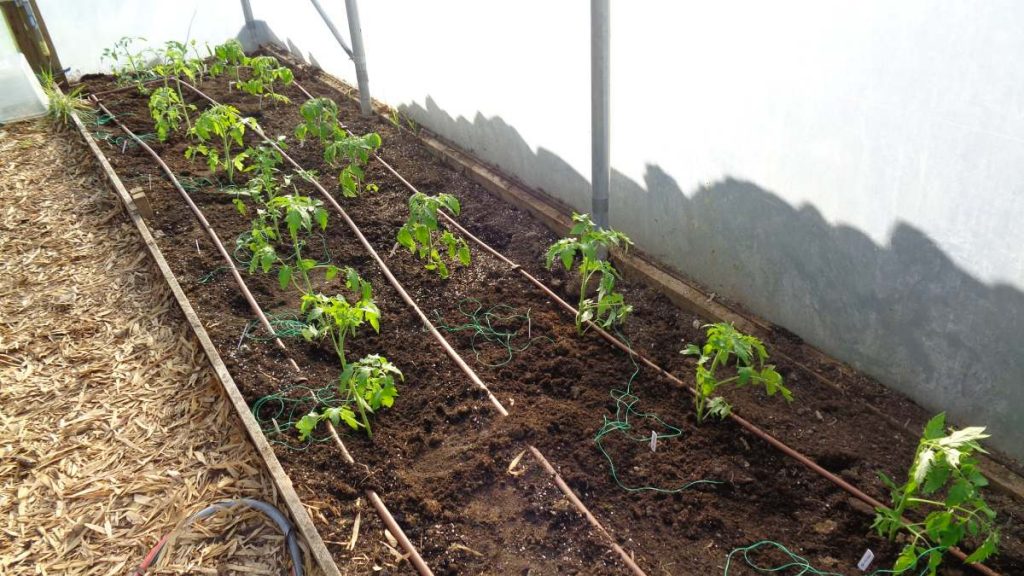 Tomatoes Planted in the polytunnel between lengths of drip hose

For years I’ve used soaker hoses for watering. They’re efficient and waste less water than sprinklers. Because the water is provided slowly over a long period it has time to deeply permeate the soil. It takes longer to water but saves my time as all I do is connect up the pipe and leave it to carry on. 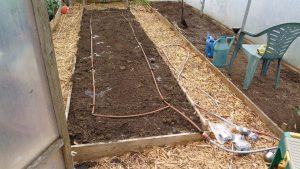 Installing and testing the drip irrigation in the centre polytunnel bed. I ended up adding a third line in the centre.

The problem with soaker hoses, especially as they age and when used under cover, is they get larger holes and spray mini fountains. Rarely where they’re wanted! After a few years, the cheaper ones become more spray than soak.

So I decided to move onto dripline irrigation, which is favoured by the professionals. The lines have little holes from which the water drips out. Inside the pipe there’s a device that equalises the pressure so the holes drip at the same rate. Clever stuff!

I’ve gone for Permadrip Pro Dripline from Access Irrigation who have been really helpful answering my questions. Putting it together was really simple and easy when I came to do it. They’ve a series of helpful videos on their web site.

It’s more expensive than soaker hose but first results are very promising. The polytunnel beds were bone dry and rehydrating is often a problem. After leaving the dripline going overnight on the centre bed, it appeared dry on the surface. Using my finger test moisture meter showed it was damp under the surface. 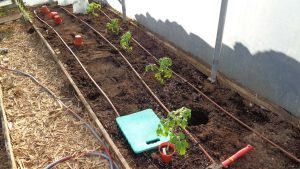 Planting out the tomatoes in the polytunnel

I’ve started planting out tomatoes, despite the cold weather. The propagators are full and the plants are getting very leggy, so I’ll have to take a chance. They’ve gone in fairly deep – burying about four inches of the stem.

By the time I’d got ten plants in, my back was killing me. I’ve been told today that bending and twisting is the worst thing you can do. That was exactly what I was doing as I planted the tomatoes. Oh well, seeing the osteopath on Monday. I think she walks on water on her day off.

We’ve had a useful amount of rain recently, about 60mm and, so far today, 16mm. That might not seem a lot but it’s the equivalent of 76 litres per square metre. Near 14 gallons per square yard.

Because we’ve been improving our soil by increasing the organic matter, water that would have just flowed off the surface is now being held in the soil to keep things green in the next dry spell. The grass in the fields is growing well again, which keeps the sheep happy. 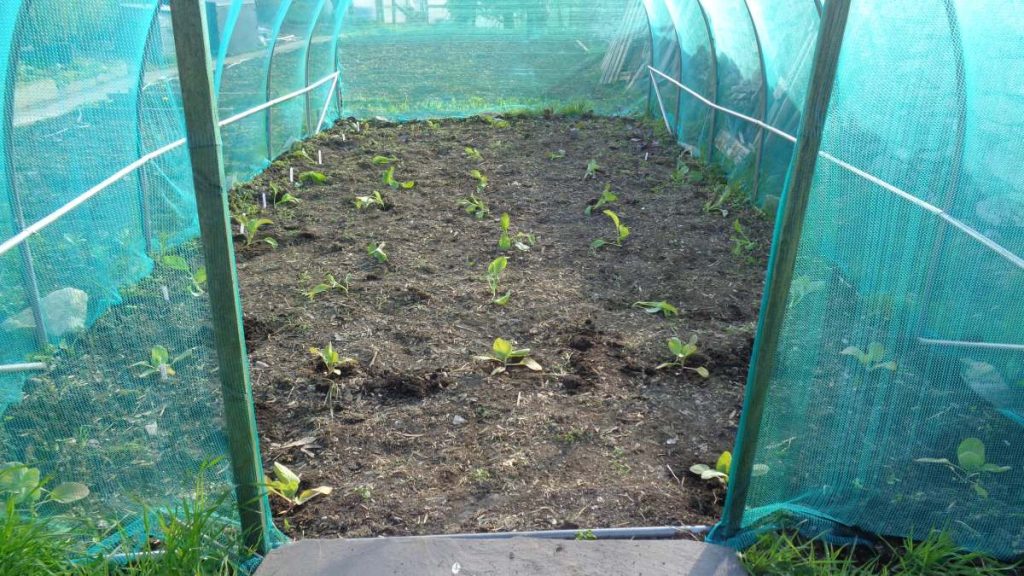 Brassica Tunnel planted up, protection from wind and pests.

Because my back is really playing up, my son-in-law came over to help. All I can honestly claim to have done is show him what to do. The brassica tunnel now has sprouts, cauliflowers and calabrese planted. We also put a row of red acre cabbage, a few Hispi cabbage and a row of cauliflowers in without cover.

The soil is very rich having had so much rotted sheep manure added and it’s been heavily limed earlier this year. Should be ideal for brassicas and legumes.

Hopefully they’ll escape the evil but pretty cabbage white butterflies but who knows? Still got some calabrese to go in the small brassica tunnel in the field plot. They’re holding in the coldframe for now but really need to go out when the weather improves. 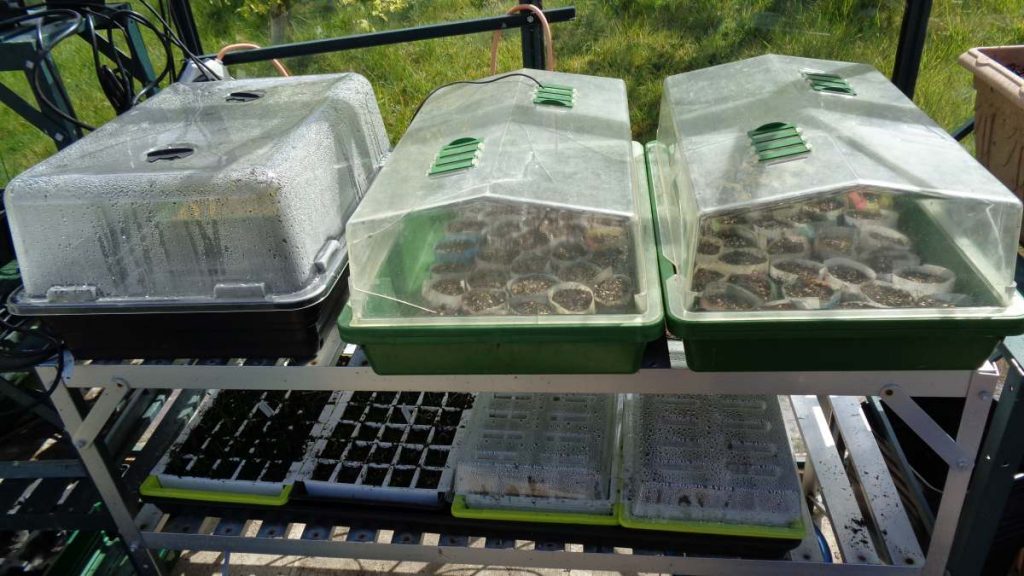 Parsnips in paper and degradable pots kept under heat in the propagator for a week prior to planting.

Filled a raised bed with parsnips started in paper pots on heat. Nothing showing yet above the surface but I’m hoping they’re growing. There were 3 seeds sown per pot which will need thinning down to one. Just a variation on station sowing really.