Cold Weather & Tour Around the Plot

As I write this, on Sunday afternoon, you’d be forgiven for thinking the date was 23rd November not 23rd June. It’s a grey sky, blustery wind, rain coming down the temperature is 11 degrees C. Inside the house we’ve given in and put the heating on.

The only hope is that the met office are warning that 10 years of wet summers could be in front of us. I say ‘hope’ because we all know how reliable their long term forecasts are. So get the sun cream in ready for next year!!

If they are right, it’s pretty serious. It isn’t that we don’t really enjoy being on the plot in the rain but the rain washes nutrients from the soil, cools things down which slows growth and the slugs love it. The farmers aren’t exempt, and we’ll see the prices of home produced foods rise at a time when the international market is set to rise.

Make no mistake, growing your own may be a hobby today but in a few years it may be vital to our survival. The more I research it, the worse the long term picture looks. Countries like China and India are on the up and demanding their share of world food markets. Even in the war, Britain was at best 50% self-sufficient.

The current economic situation doesn’t offer much hope either. Those in a job are lucky to have kept pace with inflation over the last couple of years and those on benefits are seeing them cut. Whoever is in power is going to be hard pressed to keep up reduced levels of payment.

Imagine being on a fixed income. Now double the cost of food. That’s why I think Grow Your Own will be the difference between eating well and subsistence on the cheapest processed pap. 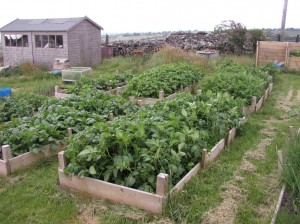 Back at the start of March I planted some Aaron Pilot first earlies in the raised bed with a coldframe over. That’s 16 weeks ago and I’d hoped they’d have been ready after 12. But they’ve yet to flower which usually indicates the tubers are ready. I’ll have to investigate next week.

The rest of the potatoes went out on 20th April into the raised beds.

Pleased to report that these are looking OK. Although I’d have liked them to have bulked up a bit more than they have. There’s time yet but onions react to daylight and we’re on the clock having passed the longest day of the summer solstice.

The parsnips are coming up in the barrel slices and I’m pretty confident we’ll have a good crop this year. They need a bit of thinning but through luck or judgement, I’ve managed to sow evenly and well spaced.

Carrots are another story, at least some have germinated but not what I hoped for by far. I’ve got some Maestro and Eskimo seed and I’ve just time for a last sowing.

The rhubarb is doing really well still, especially when you consider that the strong winds have been blowing some leaves over and breaking stems earlier in the year. Because they’re growing in mini-raised beds it will be easy (I hope) to move them this winter across into the walled garden.

The comfrey plot is established and I’m taking my first cut now. It’s adding it’s goodness to the compost heaps and next year we should be in full production. I’ve some cuttings in pots to go in and hope to double the size of the plot this year.

The lack of greenhouse and my decision to move to the walled garden which is being cleared, means that little else is going this year. Still, something is better than nothing and next year we should be back to self-sufficiency. 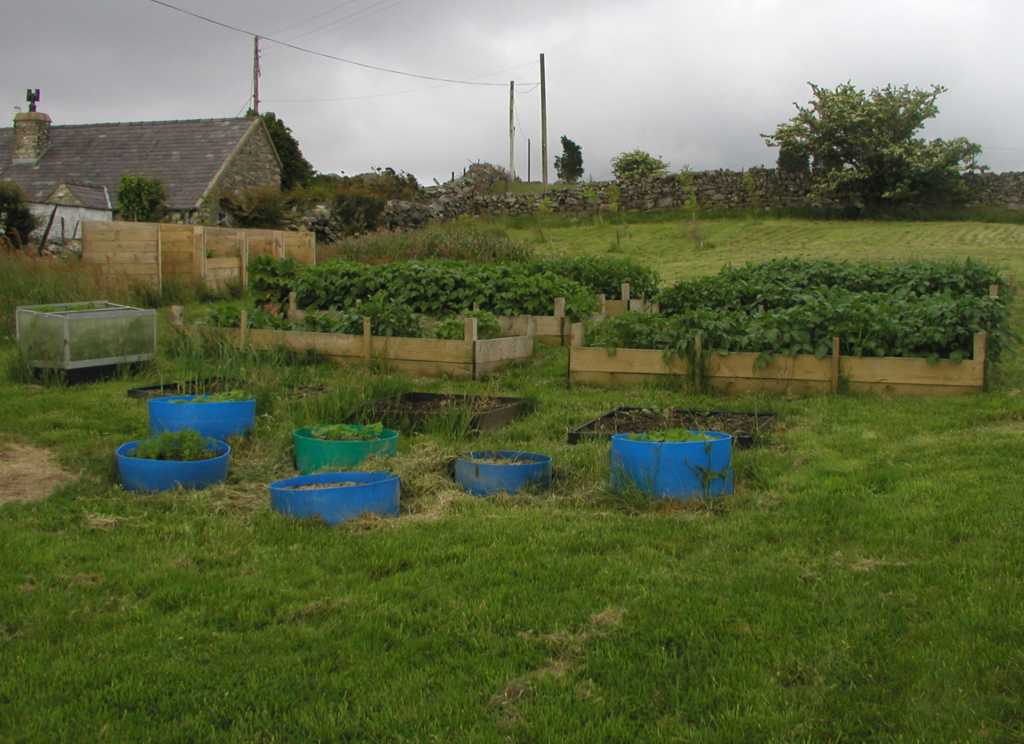 View Up the Plot. Carrots & parsnip barrels to the front 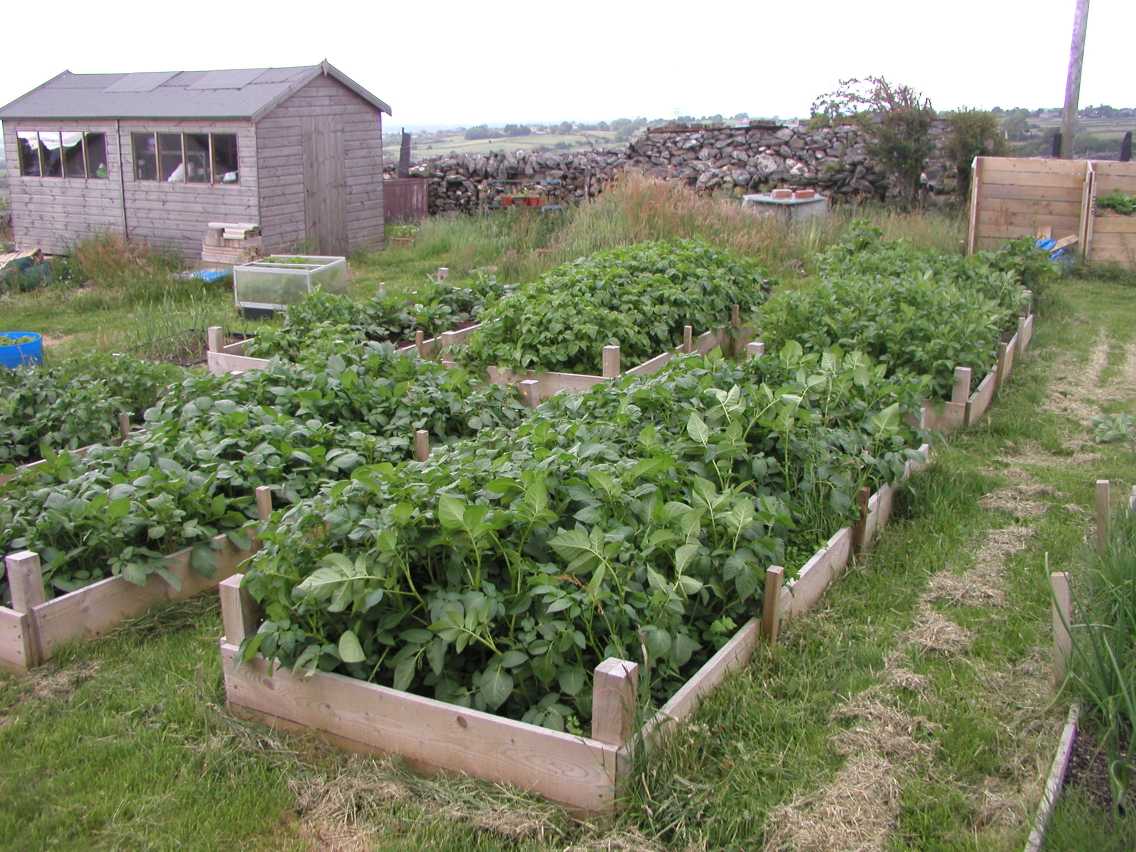 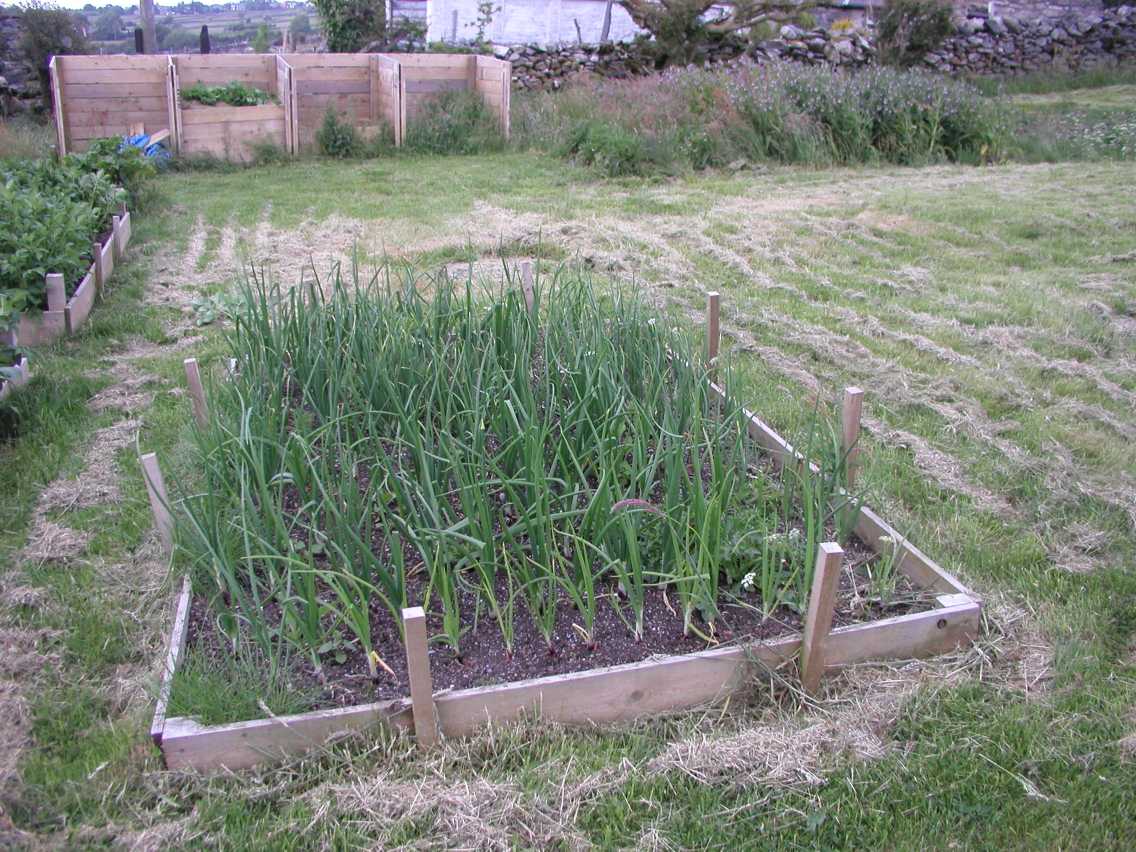 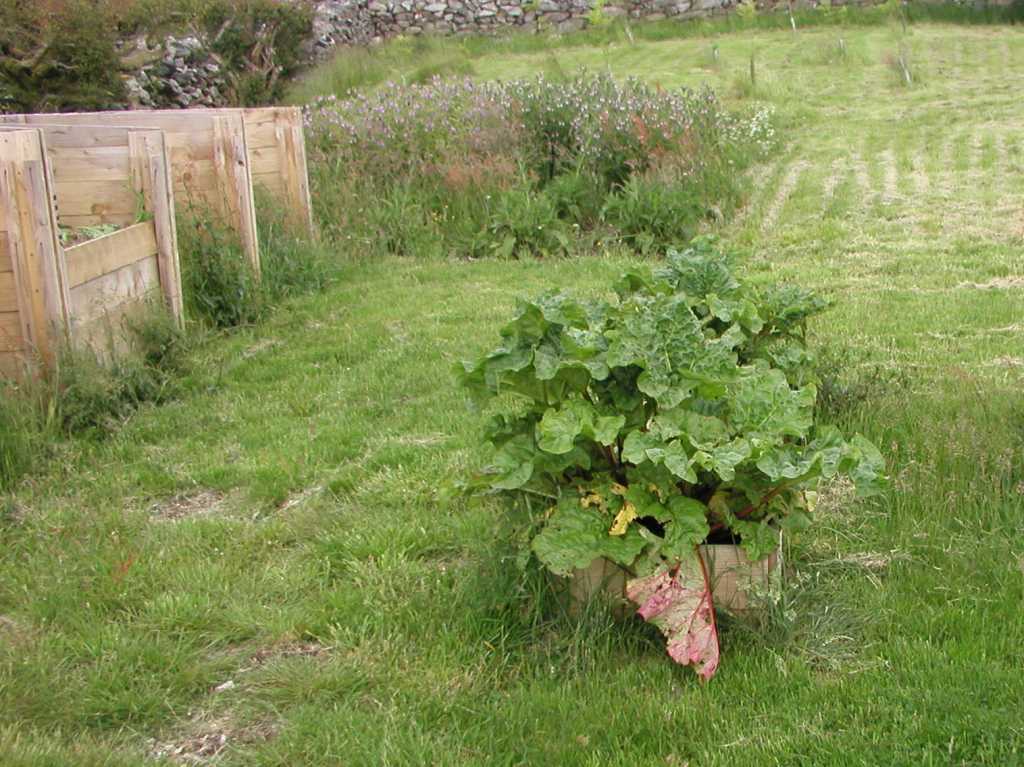 4 comments on “Cold Weather & Tour Around the Plot”