Clearing ground for the greenhouse

Having lost my previous greenhouse with the wind, I’m putting the replacement in a different position. It’s not quite as convenient in some ways, the last one had water and power right by it and it was in a sunny spot but when the wind came powerfully from the east, down it went. 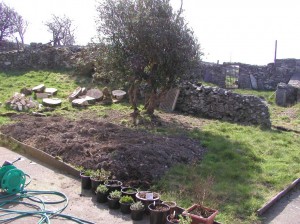 The patch of land to clear for the greenhouse etc. Note the rhododendron just in the wrong place.

The new position is shielded from southerly winds by the house. South is where most of the gales seem to blow from. To the north and east it’s shielded by the land being higher and stone walls and to the west a waist high wall does provide some shelter.

It’s not too far from the outside power circuit so I should be able to get power to it without breaking the bank and there’s an outside tap not too far away for water.

Because it’s going on fairly level ground, I won’t need to construct an elaborate base. The plan is to trench out, pour some concrete and lay 4″x4″ pressure treated beams on top. Basically because I know I get the beams level and smooth, unlike concrete. I can hear builders laughing away reading this, but I’m not a builder.

I’ll lay some slabs in the centre and effectively have borders I can grow in to the sides. A few slabs in front makes sense and I’ll use some pieces of slate around the sides to stop grass and weeds growing right by the house. 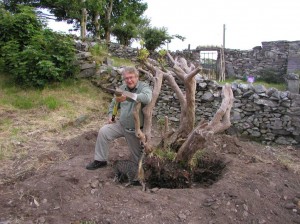 Trimmed back to the trunk ready to winch out. I’m holding the mattock that makes clearing easy.

The first task was to clear off the grass. I’ve found my mattock/pick-axe is ideal for this job. You bring the flat blade in at a shallow angle and then lever back, lifting the turf. Once you get into the swing of it, it’s surprising how much you can clear away without exhausting yourself.

The next job was to remove an old rhododendron from the area. It really couldn’t have been in a worse position. Got the trusty chain saw out and got rid of the foliage, just leaving the main stem. 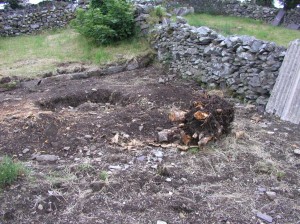 The I had to dig down a couple of feet all around the base of the tree and cut any roots so loosening it. Incidentally. The photo of me with the mattock was a bit staged, I had to have a hot shower the moment I finished. Not just the dirt, but the back was screaming. Hence a very clean John!

The next day I had help from a local chap to get it out. The plan was to use my winch, securing the rope around an old and thick sycamore. Problem, the chain winch has a limited length of pull, about a metre, and the rope was quite stretchy.

After a couple of tries it was obviously not going to work so I headed off to the metropolis of Caernarfon and picked up some wire tow rope (3000Kg strain) and a felling axe. My felling axe vanished under mysterious circumstances when we were having some work done.

When I returned, my pal had actually managed to split the rest of the roots and the stump was loose. Oh to be 30 years younger and fit! We chain sawed it down and he then chopped it further back with the axe until it became manageable and we got it out of the hole.

The next phase is to run the rotavator over the patch to break up the soil and remove the larger rocks before levelling it off with a rake ready to start putting the footings in for the greenhouse.

I think we earned a beer after that!

3 comments on “Clearing ground for the greenhouse”