It’s been an awful week for many of us in Britain, pouring rain and strong winds make venturing outside unpleasant and the ground is absolutely sodden. We’re the lucky ones compared to those who’ve watched their homes and gardens sink under filthy water as rivers burst their banks and flood the lands around. 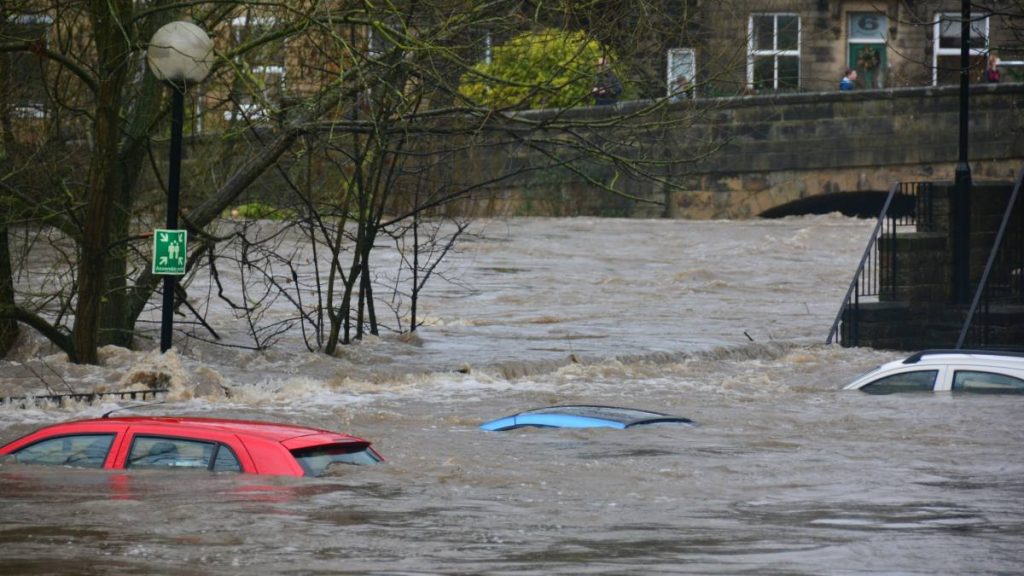 Being 600 feet above sea-level on a hillside, flooding from rivers isn’t a concern here but we’re not totally immune from flood. What happens is that the rain pours onto the hillside above and when the land is saturated the water flows down in sheets. The rough track to the side of us often has trickles of water but in a cloudburst it almost becomes a river, washing the loose stones into piles at the bottom.

My neighbours above have put a lot of money and effort into planting trees which will mitigate heavy rain. The roots penetrate the ground and help water to soak in rather than flow down off the surface. I’ve planted some trees but I think I need to plant a lot more if, as they predict, these storms and heavy rain are to become the norm as the weather people predict. See this post – Floods – the answers in the land 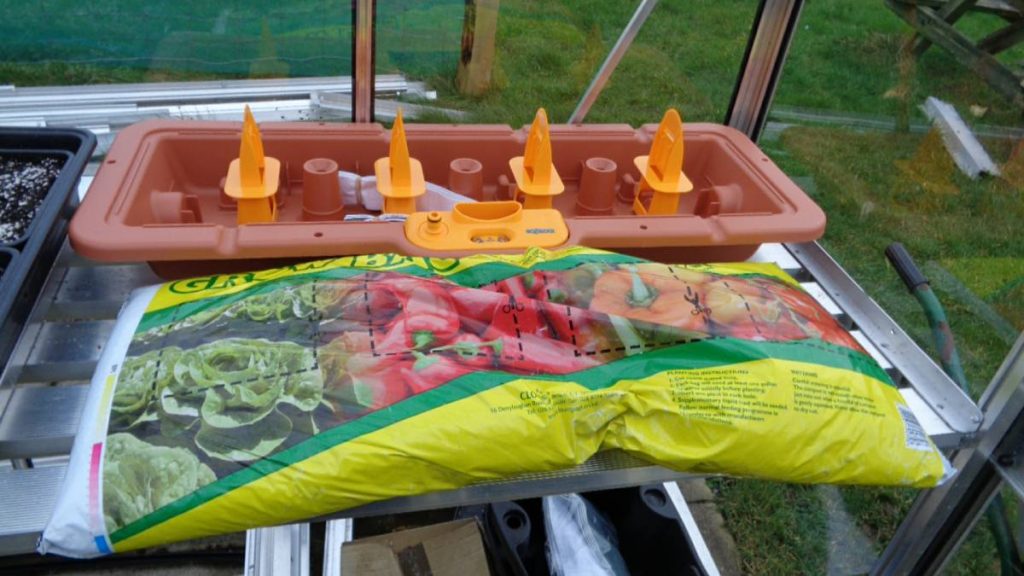 My growbag waterer along with a grow bag awaiting setting up and the strawberries.

I’m not a great fan of grow bags, they have their plus points but generally they don’t have enough compost inside them and, as plants grow, watering becomes increasingly difficult.

I’ll continue growing my tomatoes in the quadgrow planters which work well but I want to try growing some strawberries in a growbag. I’ve not done this before but believe I can close-plant and get a good crop. This wick based watering system, like the quadgrow, seems to be the a great way to keep things watered but not over-watered.

The Grow Bag Waterer is available from TwoWests.

I’m also playing with constructing a wicking pot system for a cucumber in the new greenhouse. It’s not complicated; a box with a lid, a pot and some capillary matting for the wick. Drill two holes in the lid, one for the pot wick and one to add the water. Drill a wide hole in the base of the pot for the wick and cut a piece of matting to for the wick. Job’s a good ‘un! Well, that’s the theory anyway. 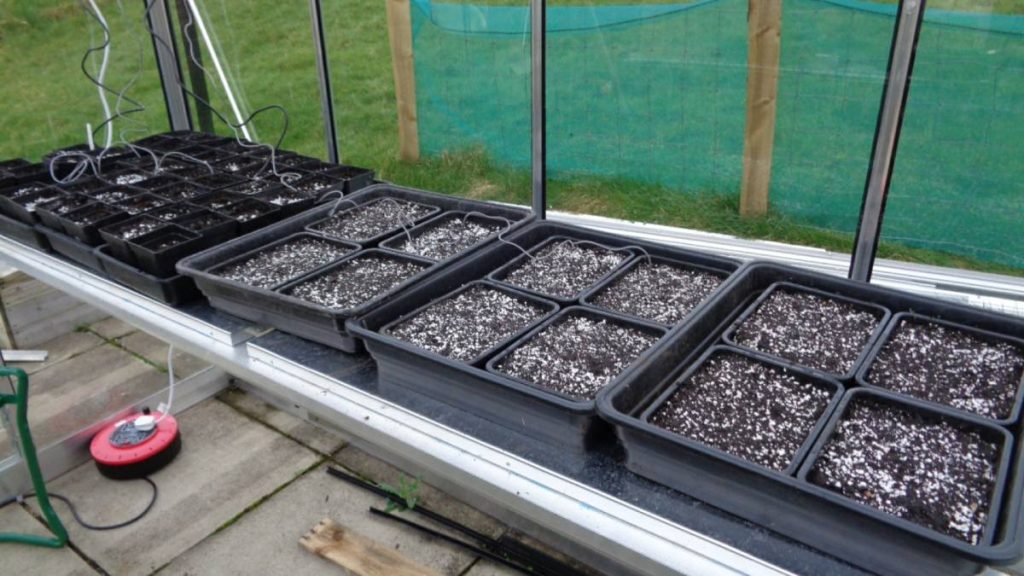 Peas to the right & Beans to the far end on the heating trays. The wires are temperature sensors so they don’t go above 15ºC

The Karmazyn broad beans in pots and Douce Provence peas in half seed trays are on heating trays in the new greenhouse. I’ve got them set at 15ºC to germinate and once they show, I’ll switch off the heat. After a few days they can go into the coldframes until I plant out. 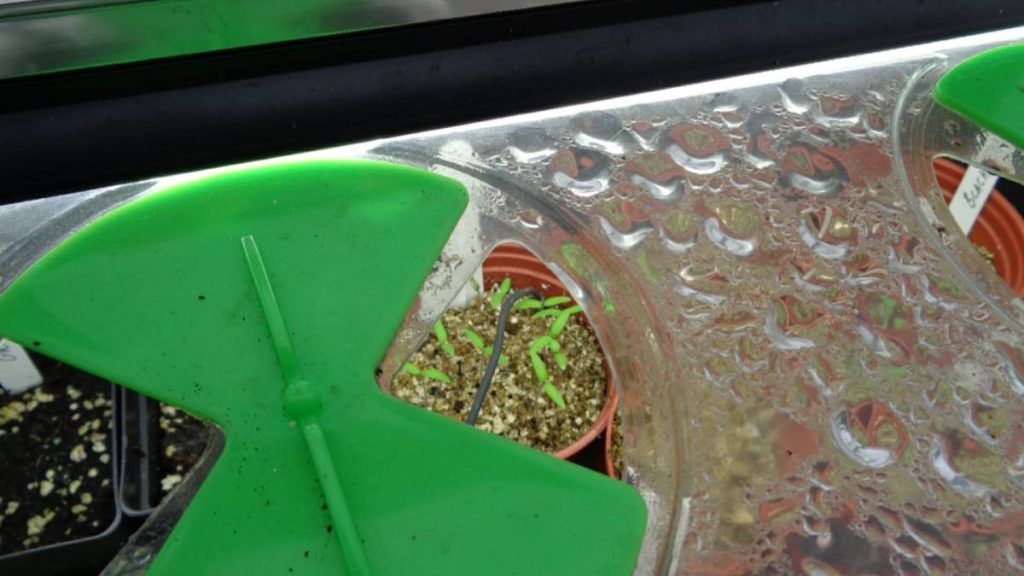 Tomato Seedlings visible through the vent of my Geopod.

Over in the potting shed, the tomatoes are starting to show in the Geopod propagator. I’ve now got the growlights on, supplementing the dull daylight, to boost them and stop them getting leggy.
Once the seedlings are all up, I’ll transplant into pots and move them into the Vitopods with their growlights until conditions are right to plant out.

I looked out at 6am this morning and noticed a big patch of bright light in the pre-dawn blackness. At first I thought it was a bright moon and then thought it might be someone with a torch. Finally realised one set of growlights was on. Must adjust the timer!